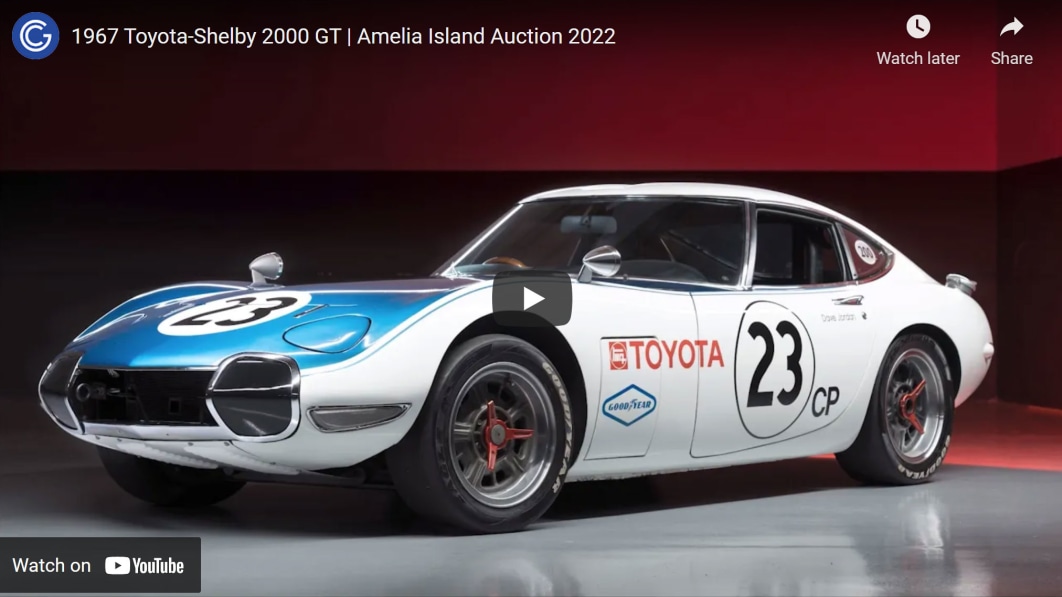 Carroll Shelby’s touch still lingers to grace the auction fates of vintage racers rarely spoken of in conjunction with his name. Last August, it was RM Sotheby’s offering a Ruddspeed Ace, the English roadster that served as archetype for Shelby’s Cobra. Next month, at the Amelia Island Concours d’Elegance, Gooding & Co will put a 1967 Toyota 2000GT on the block, chassis number MF10-100001. This was the first production model with a serial number to leave the Toyota line in Japan, destined for Carroll Shelby’s California shop for development to race in the 1968 SCCA Championship in the C/Production class for imports. Toyota was making its name on dealer lots with economy cars, but wanted to win on Sunday against competitors like Alfa Romeo, Datsun, Lotus, Nissan, Porsche and Triumph.

This is one of three cars Shelby’s development team prepped for the series, helping to spend the $500,000 Toyota invested in the race program. Driver Davey Jordan piloted MF10-100001 to fourth in the championship that year, teammate Scooter Patrick finishing third behind the two Porsche 911s run by the Vasek Polak dealer team. That would usually be considered an outstanding result for a first-time campaign of a brand new car in an automaker’s first effort at a country’s national series. But Toyota didn’t want outstanding, it wanted the gold cup. Retail customer 2000GTs cost $7,150, which was about $2,000 more than a Porsche 911 or a Jaguar XKE at the time, almost $3,000 more than a 1967 Chevrolet Corvette. The Toyota’s slow sales were probably already helped by fantastic reviews and its appearance in the 1967 James Bond film “You Only Live Twice,” but would likely have been aided by even more by headlines about beating Porsches. Jordan later said, “Toyota lost a little bit of face and discontinued their racing efforts. There was no talk of going racing at all (in 1969).” Toyota quit the series at the end of 1968, and quit producing the 2000GT in 1970 after 351 had been built.

Gooding & Co says this example has been with the same family since 1980, making appearances at shows like the Monterey Historics and the Goodwood Festival of Speed.

At the moment, a four-rotor, Le Mans-class-winning 1989 Mazda 767B holds the record for the priciest Japanese car sold at auction, at $1.75 million. The auction house hasn’t provided a pre-sale estimate for the 2000GT yet, but this is the same car owned by Bob Tkacik and Peter Star of Maine Line Exotics, put up for sale in 2012 for $1.7 million yet not getting any takers, apparently. It’s not outrageous to think they could get that amount and then some in the current market, with a regular 2000GT selling for just over $900,000 at an auction in 2020.