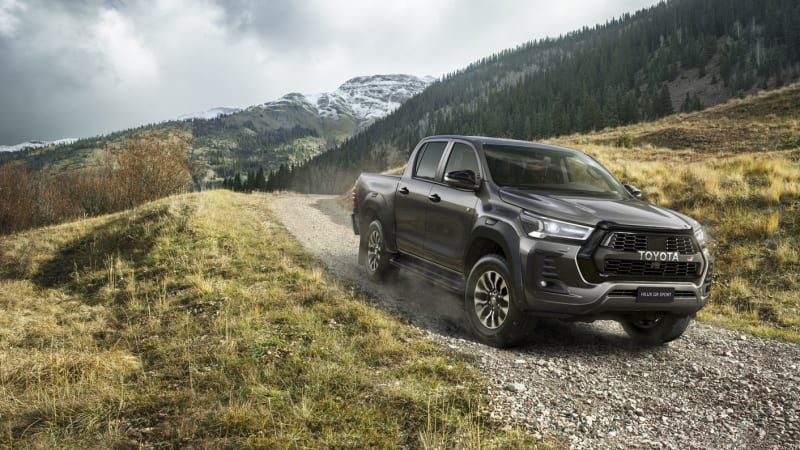 Toyota’s famously robust Hilux pickup has competed in the Dakar Rally numerous times over the decades. The street truck and the race truck have normally stayed on opposite ends of the same spectrum, but their paths are crossing with the launch of the Hilux GR Sport.

While it’s not an alternative to the Ford Ranger Raptor sold overseas, the latest addition to the Japanese company’s truck range is a step in the right direction. It stands out from other members of the Hilux range with a specific suspension system that includes monotube shock absorbers and firmer front springs. Toyota tells us that the GR Sport consequently handles and steers better than the standard Hilux.

The updated suspension components are painted red to further differentiate the GR Sport and the Hilux. Car-spotters will also notice a black grille with a new-look mesh insert and “TOYOTA” lettering, black exterior trim, specific emblems, and 17-inch wheels. Inside, the front passengers sit on nicely-bolstered sport seats upholstered in a combination of leather and synthetic suede, and Toyota added shift paddles as well as aluminum pedal caps. Red stitching and carbon fiber-look trim pieces add a finishing touch to the rally-inspired design.

We’ve come to expect great things from Toyota’s Gazoo Racing division (it turned the humble Yaris into a rally beast, after all) yet it made no mechanical modifications to the Hilux that bears its name. Power comes from a 2.8-liter turbodiesel four-cylinder engine rated at 204 horsepower and 369 pound-feet of torque; it’s an engine that was added to the line-up in 2020. Permanent four-wheel-drive comes standard, but Toyota didn’t mention if the GR Sport will exclusively be offered with a six-speed automatic or if a six-speed stick will be available as well.

Toyota dealers across Europe will begin receiving the Hilux GR Sport in summer 2022. Pricing information hasn’t been announced yet, and it will likely vary from country to country. Of course, nothing suggests the truck will be sold in America, where Toyota directs customers in the market for a midsize truck to the Tacoma. It sounds like the GR Sport was developed largely for the European market, but it’s not the first Hilux tuned by Gazoo Racing. In 2021, the “GR” initials appeared on high and low variants of the Hilux designed for buyers in Thailand.

Like most American school children, I have enduring memories of traveling in big yellow school…