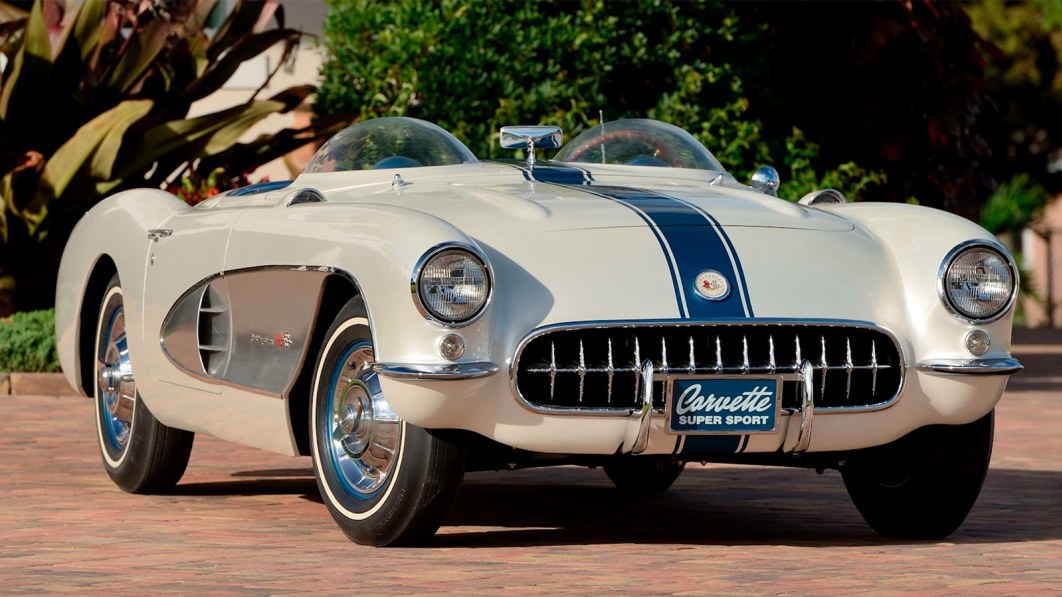 This weekend, Mecum is hosting one of its larger auctions, in Kissimmee, Fla., And we spent some time digging through the auction listings. With around 3,500 vehicles up for grabs, you won’t be surprised that we found some pretty sweet cars (and even one polarizing one). We’ve highlighted five that we’re quite fond of, from one-of-a-kind show cars to much more modest machines. So if you need to kill some time, check out their full auction catalog. Well, check it out after you’ve looked at these five first.

This Corvette is a true piece of history, whether you’re into Corvettes, Chevys, American cars or sports cars generally. This was a special show car built by Chevrolet to show off the Rochester Ramjet fuel-injected engines it would start offering that year. It went on tour to multiple car shows in 1957, including the Chicago Auto Show, and it appeared in various magazines.

The car got a 283-cubic-inch fuel-injected V8, and it was paired with a three-speed manual transmission. The most obvious visual change is the custom fiberglass cowl with plexiglass windshields for the driver and passenger, but there are other little changes, too. The side scallops are finished in brushed aluminum with chrome-plated surrounds, something not offered on production models. It got unique taillight covers, as well. The interior featured some tweaks such as unique door panels, a center clipboard, magnetized and anodized cups, custom pedals and a different tachometer.

Although the car was restored, much of it is still original. The powertrain, the upholstery, the custom interior parts and even the trunk carpet are all what the car had in 1957. It even has special Corvette badge-branded tires from when it was made. And the car only has 4,317 miles on it.

Mecum estimates the car will sell between $1.75 million and $2 million.

Our next car is another one-off, but this one was commissioned by actor and drag racer Tommy Ivo, also known as TV Tommy. The car was built for 1961, and what made it so spectacular was the quartet of 401-cubic-inch Buick V8s. Each tandem set drives a different axle, two engines for the front, two for the rear. According to Mecum, Ivo didn’t even drive the car much when he first got it, due to the fact that the executives on the show he was starring in at the time didn’t want him dying in a crash, and the fact the NHRA wasn’t going to allow the car to compete.

When the car was originally built, it had a different body on it and was called Showboat. This Buick Sports Wagon body was added in 1981 along with the name Wagonmaster, not long before Ivo ended his racing career. Mecum is also selling a custom Ivo trailer that fits the car well. The car is estimated to sell for between $150,000 and $200,000. The trailer is estimated at $75,000 to $100,000.

Our next car isn’t nearly as fast as the other two, but it’s still quite wild. It’s a 2002 Smart Crossblade, which was a limited edition model that Smart actually sold to customers. The company made 2,000 of them, and this is number 1,232. It even has a Show and Display import exemption, so it is legal to import to the U.S.

It’s pretty obvious what makes it special: a whole bunch of the stock car is missing. It has no roof, it has no windshield, and it has a couple dinky bars in place of the doors, which also scissor up. It has some amazing three-spoke wheels, and a vivid red interior. It’s still not especially quick, though. It has a turbocharged 599-cc three-cylinder engine that makes 70 horsepower and 74 pound-feet of torque channeled through a six-speed automated manual transmission. Still, it looks unlike just about anything else on the road.

Some of the earliest Mitsubishi Lancer Evolutions are finally becoming legal to import, such as this very clean Evo II. The Evo II was only slightly changed from the original, and it came with a turbocharged 2.0-liter four-cylinder making 252 horsepower and 228 pound-feet of torque. It of course had all-wheel-drive and a five-speed manual transmission.

The RS variant is the cheaper, stripped-down version made with modification and racing in mind. They came with steel wheels (included with the car) and lacked a stereo. Mitsubishi would make RS variants of its Evos for many years to come. This particular one is said to have also had its timing belt, water pump and serpentine belts recently replaced, and it’s entirely stock, so there aren’t any ill-conceived modifications to worry about.

It looks like a clean example. The interior doesn’t show any cracked plastics or worn-out upholstery, and underneath, it doesn’t seem to have any serious rust or damage. It should make for a reasonably affordable and eye-catching off-roader or car show cruiser.