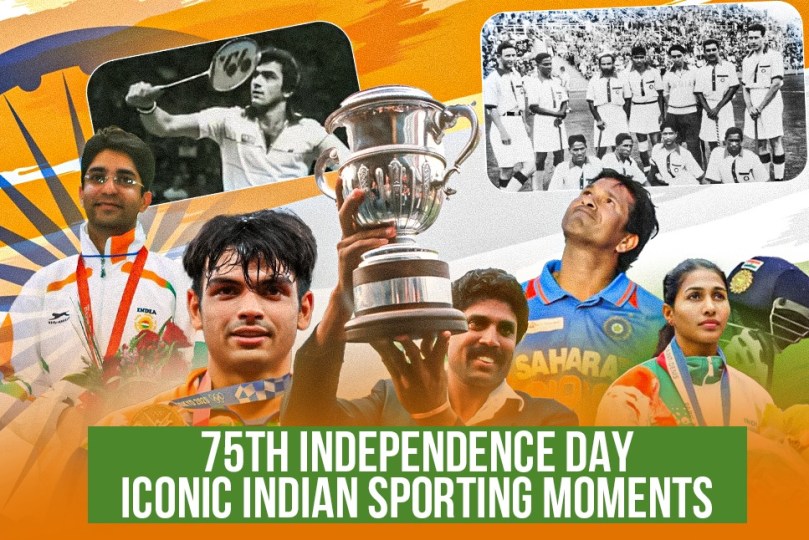 75th Anniversary of Indian Independence – India’s Top Sporting Moments: India have gradually taken rapid strides in the field of sports in the last two decades. Athletes have won laurels post India’s independence in 1947. The likes of KD Jadhav’s bronze in 1952 Olympics gold in wrestling or Kapil Dev’s unit winning the 1983 Cricket World Cup or Neeraj Chopra’s gold in 2020 Olympics has been a reminder about the growth of India as a sporting nation. Here is a look at some of the iconic moments from Indian sports.

It is one of the most iconic moment in Indian sports history. Though India are a force now, they were not the same during the time. However, they overcame all odds to beat the mighty West Indies in the final to lift the title at Lords. As a result, this feat of Kapil Dev and co has been etched in the memory of all.

It was the first Olympics after India attained independence. And the Indian men’s team came up with a fine show to clinch gold medal. They defeated Great Britain 4-0 in the final while their semifinals against Netherlands was much closer.

India have never been known as a superpower football nation even at the Asian level. But they took their game to the next level to win the 1962 Asian Gold medal. They defeated South Korea 2-1 in the final. Such football moments as far as India are concerned, is something to cherish for the rest of the life.

KD Jadhav became the first Indian athlete to win an individual medal at the 1952 Helsinki Games in wrestling. He won bronze. The wrestler, also known as Pocket Dynamo, achievement is still rated as one of the best show by an Indian in any discipline.

Anju Bobby George delivered her A game to win a bronze medal at the World Championships in 2003. What makes the feat even more stunning is when the Indian athlete made it public two years ago that she was born with just one kidney.

Indians might have won many gold medals in the men’s hockey in the past, but it was the shooter, who became the first Indian to won an individual Olympic gold. Abhinav Bindra achieved the feat in the 10m air rifle contest.

The javelin thrower created a storm in Tokyo, winning the gold medal. He became the first Indian to win a medal in athletics. He overcame stiff competition to win the prestigious yellow colour metal, and has become the toast of the nation as well now.

Prakash Padukone became the first Indian to win the men’s single title in the All England Open in 1980. He could have achieved even something bigger, and came close to winning it next year, but failed in the final.

After scoring a hundred against Bangladesh in 2012, Sachin Tendulkar became the first player to have ever scored 100 tons in international cricket. His feat can be understood from the fact that till date he is the only cricketer so far to have achieved the incredible record.

Leander Paes has won a number of doubles trophies in his career, but the singles bronze at Atlanta Olympics stands out. He defeated Fernando Meligeni in the bronze medal contest. In fact, he gave a good fight to Andre Agassi in the semifinals.

PT Usha and Milkha Singh might have failed to win an Olympic medal, but they came tantalisingly close to winning an individual medal. In the 1960 Rome Olympics, Milkha missed the bronze by tenth of a second. In the 400m hurdles during the 1984 Olympics, Usha lost the bronze by one hundredth of a second.