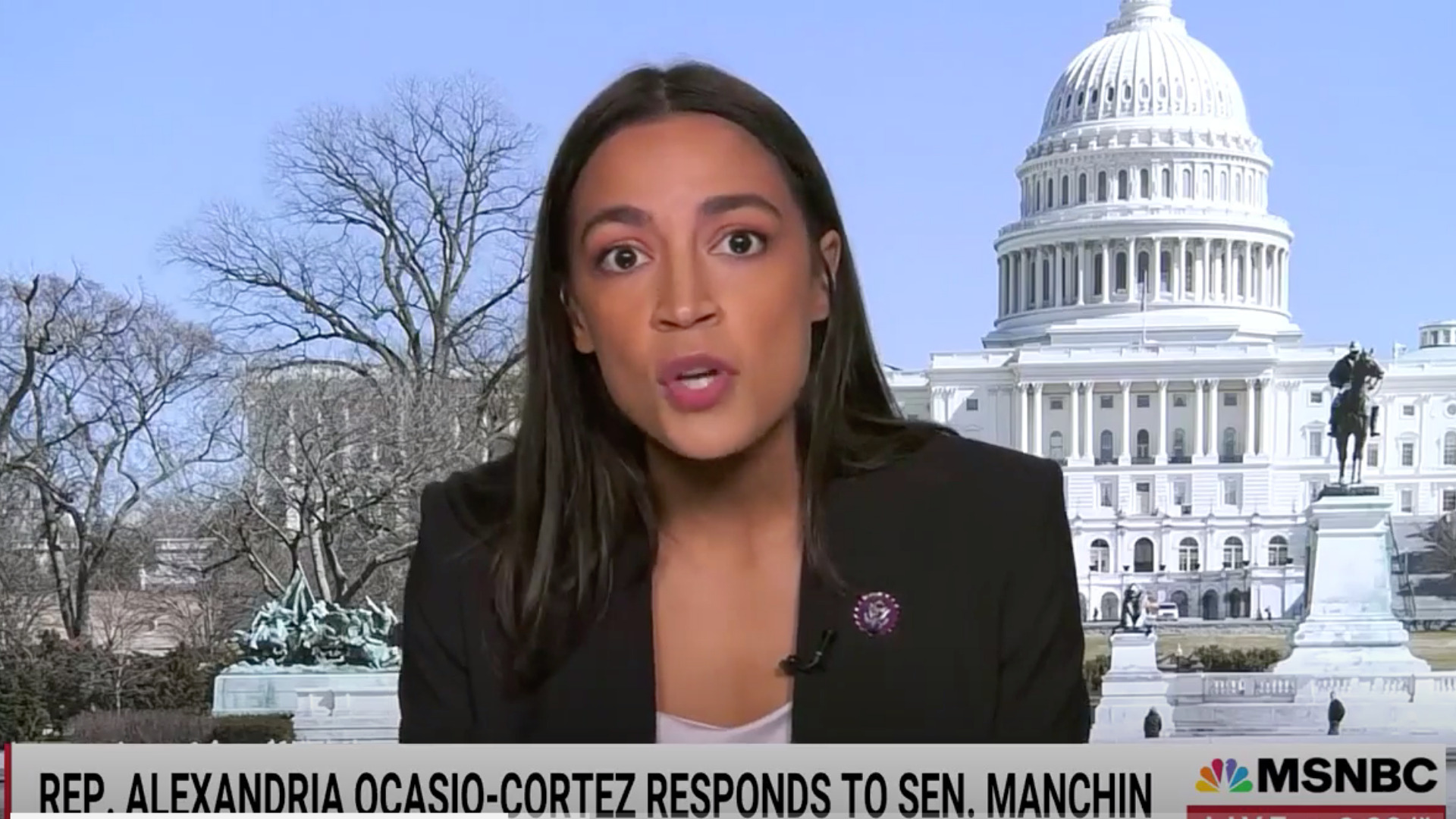 Ocasio-Cortez made her remarks during an interview on MSNBC’s “Morning Joe.”

Rep. @AOC (D-NY) says Sen. Manchin opposition “is an outcome that we warned about” and Dems have “every right to be furious with Joe Manchin.”

“It’s really about time that we take the kid gloves off and we start using them to govern for working families in this country.” pic.twitter.com/YV3F58Q0tY

AOC said, “Just the fact that you can go on Fox News and say I don’t feel like voting for this, or I don’t think I’m going to do it. Having that not scheduled a vote, the idea that would happen in the House of Representatives is unheard of.”

Ocasio-Cortez continued, “And I think what’s extremely important is that we really need to start creating an environment of pressure, very similar to the filibuster, where now you don’t even need to talk to engage a filibuster, but you just need to threaten it.”

“But we really need to create a governing environment in the United States Senate, make it tough, don’t go on vacation, come back, call the vote, have to stand in front of your constituents and say no, I’m going to take dollars, I’m going to take the food out of your kids’ mouths — make him take that vote,” AOC contended.

The far-left Democrat then said Congress should “get serious” about governing.

“They made us take the vote for the bipartisan infrastructure bill,” she continued. “It was a tough vote. It wasn’t easy. And we have to stop giving people get out of jail free cards. Enough. Enough. And it’s really about time that we start to get serious about governing, as well as leaning on the president’s executive authority, which I do not believe has been used to the fullest extent that the American people deserve.”

“God forbid that they might have to actually show up and stand or sit and actually have to talk and actually live out the threat of their filibuster,” AOC added. “I mean, it is unconscionable the way the Senate operates. It’s fundamentally undemocratic.”

“What we really need to do is crack down on the Senate, which operates like an old boys’ club that has a couple of gals in it that have managed to break through,” Ocasio-Cortez said. “We actually need to institute some institutional discipline.”

What do we do now? Democratic leaders have real tools they must use. Senate must reconvene & force Manchin to vote on BBB. And, they need to change the Senate culture, starting with filibuster. POTUS also needs to use his exec authority to fullest extent on student debt & more.

In her tirade, AOC also falsely claimed that she represented “just as many or more” people than Senator Manchin.

Rep. @AOC (D-NY) on Sen. Manchin’s no on BBB Act:
“The idea that Joe Manchin says he can’t explain this back home to his people is a farce … I represent just as many or more people than Joe Manchin does.” pic.twitter.com/F9W1Ex8epU