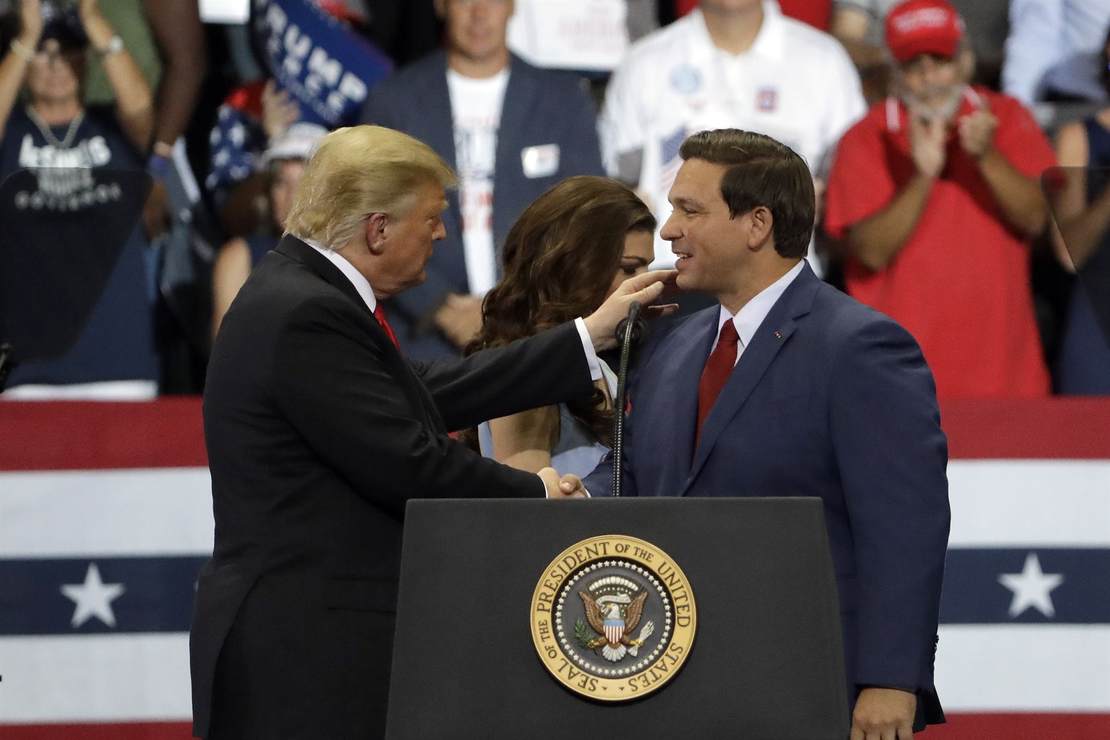 Are Ron DeSantis and Donald Trump feuding with each other as they move to position themselves for the 2024 election? That’s the impression you’d get from several different sources right now.

After all, Donald Trump did make a single derogatory comment about “some politicians” not revealing their vaccination status some days ago, calling them “gutless,” while praising how many lives the vaccines have saved. Clearly, that had to be a shot at Ron DeSantis, right? At least, that’s how it’s being spun by the likes of MSNBC and CNN, among others.

Of course, DeSantis has actually revealed his vaccination status, along with spending the last year promoting and prioritizing vaccinations for the elderly in his state. How quickly some forget the “60 Minutes” hit piece and coordinated campaign that followed to accuse the Florida governor of preferential treatment for retirement communities and Publix, the grocery store chain, that stepped up early to help with distribution.

So, was Trump actually talking about DeSantis? Maybe, though, he never did actually say that, and there are many Republican politicians who also fit the bill of not politicizing their vaccination status. So, where does the rest of this idea that Trump and DeSantis are feuding come from?

That answer comes in two parts. First, Maggie Haberman, a far-left writer for the New York Times who often presents herself as being close to Trump’s thinking (you can decide how reliable you believe she is), put out a series of tweets supposing that the former president is upset that DeSantis has refused to rule out a 2024 run.

2/2 not only positioning himself to get credit for a vaccine he once demanded it for, but he is trying to make DeSantis look like a “typical pol” who won’t be straightforward.

I’m not going to pretend that Trump isn’t extremely petty when it comes to anyone he views as a threat. Obviously, the former president has reason to feel some pressure, given the amount of popularity DeSantis holds on the right. But color me skeptical that Trump is naive enough to believe that attacking Republicans who are against vaccine mandates and lockdowns is somehow a winning strategy. He may nibble at the edges in vague terms, but he’s not taking that whole bite. It’d be political suicide.

Regardless, as the leftwing ideologues tell it, Trump is big mad at DeSantis and he’s publicly lobbing bombs at the Florida governor. That leads me to the second part of the setup. DeSantis went on the “Ruthless” podcast this week and was asked what his biggest regret was over the last several years.

This was supposedly his answer, as transcribed by CNN’s Manu Raju, whose typical job involves asking Joe Manchin every single day if he’ll change his mind on the filibuster.

DeSantis says one of his biggest regrets was not speaking out “louder” on Trump admin calls for lock down during the pandemic. “And I think it knowing now what I know, then if if that was a threat earlier, I would have been much louder.” About 32 mins in: https://t.co/HaR1MOfHWY

Sounds definitive, right? But you’ll be less than shocked to learn that the supposed mention of Trump was manufactured by Raju. DeSantis did not say anything about Trump, and the push for lockdowns early on in the pandemic was nearly universal, spanning the political divide. Further, DeSantis did actually mention a name in giving his response: Dr. Anthony Fauci.

So, was DeSantis specifically looking to hit Trump with his comments, even if ever so slightly? It’s possible, but that’s hardly as definitive as some are suggesting, and it makes much more sense that he was chiefly hitting Fauci, who was the primary architect of the lockdowns and often butted heads with Trump.

With all that said, let me explain what this is really about.

Ron DeSantis represents an existential threat to the left, including those on the left who claim to be on the right. He’s smart, he handles the media with absolute expertise, and most of all, he’s highly effective. A battle between Trump and DeSantis is exactly what they want. That’s why you are getting absurdly false contentions that DeSantis has courted anti-vaxxers, while Trump is presented as being highly pro-vaccine. That is the pressure point that is believed to be exploitable, and it’s a completely transparent strategy.

In short, I don’t buy what’s being written. Trump knows that hitting DeSantis on not being draconian enough on COVID-19 (which was absolutely the right move, given the ineffectiveness of lockdowns, mandates, passports, etc.) is a recipe for disaster. On the other hand, DeSantis knows that getting into a slap-fight with Trump in 2022 is pointless.

When 2023 rolls around, we may see the gloves come off, and Trump will have some things to answer for with his base if DeSantis runs, specifically regarding COVID-19. But for now, this “feud” is mostly manufactured by third parties looking to make hay against DeSantis because he made them look stupid — as they double-mask and look forward to their second booster shot.