Home News Biden Calls To End Filibuster For Democrat Voting Bill, Something He Once Called A ‘Very Dangerous Thing To Do’ 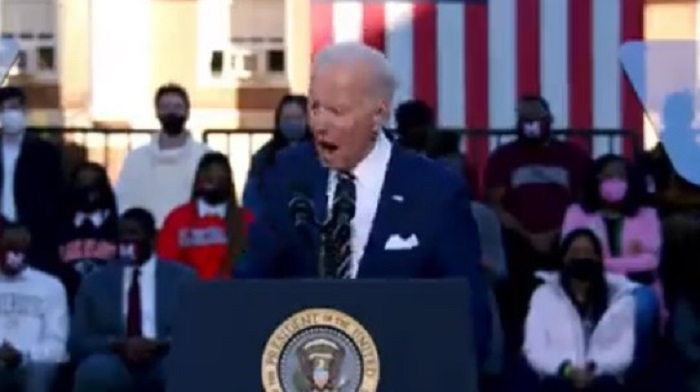 President Biden delivered an angry speech calling on the Senate to change the filibuster in an effort to get Democrat voting reform legislation rammed through Congress with a simple majority.

Biden said he had conducted private conversations with Democrat lawmakers over the previous months about changing the filibuster rules.

He expressed frustration that Republicans had used the procedure in blocking a sweeping effort to nationalize elections.

“I’ve been having these quiet conversations with members of Congress for the last two months. I’m tired of being quiet,” he said, slamming his hand on the podium.

“I support changing the Senate rules, whichever way they need to be changed to prevent a minority of senators from blocking actions on voting rights,” the President added.

Biden the implied that opposition to the Democrats’ bill was tantamount to being a segregationist or Confederate.

While yelling about having “quiet conversations” about voting rights, Biden slams his hand down and says “I’m tired of being quiet!” pic.twitter.com/qH6rCCLNbe

Biden Called Getting Rid Of The Filibuster Dangerous

First off, wanting to preserve some power for the minority doesn’t in any way equate to lawmakers siding with past racist figures.

Second, it should be noted that Jefferson Davis, Bull Connor, and George Wallace were all Democrats.

Then, of course, there is the little matter of Biden’s past record on changing the filibuster.

In 2005, Biden called the “nuclear option” to weaken the filibuster an “arrogance of power,” and said eliminating it “would undermine the protections of a minority point of view” and have “long term consequences.”

More recently, in 2019, President Biden called ending the filibuster a “very dangerous thing to do.”

Even more recently, in 2020, Biden said he did not support “abolishing the legislative filibuster” because “it raises problems that are more damaging than the problem that exists.”

FLASHBACK — Presidential candidate Joe Biden in 2020 was asked which of these ideas he supported: expanding the size of the Supreme Court, setting term limits for justices, abolishing the legislative filibuster.

Democrats Have Used the Filibuster Time and Again

Just two years ago when Donald Trump was President, Democrats had used the legislative filibuster 327 times.

Senator Kyrsten Sinema (D-AZ) wrote an op-ed reminding her own party that they used the filibuster quite recently to make changes to a police reform bill and COVID relief legislation.

“Those filibusters were mounted not as attempts to block progress, but to force continued negotiations toward better solutions,” she argued.

After @POTUS @JoeBiden denounced the rampant abuse of the filibuster last year, we did some digging. Republicans used it once. Democrats used it 327 times. @FoxNews

In addition to his angry rant about nuking the filibuster to push through legislation that would expand mail-in voting, grant federal control to elections, and require less restrictive voter ID laws, Biden told a bizarre tale about his involvement in the civil rights movement.

From the official White House transcript:

I did not walk in the shoes of generations of students who walked these grounds.  But I walked other grounds.  Because I’m so damn old, I was there as well.  (Laughter.)

You think I’m kidding, man.  (Laughter.)  It seems like yesterday the first time I got arrested.  Anyway — (laughter).

i was unaware that joe biden was arrested in a civil rights demonstration? pic.twitter.com/qFbjdcPVXg

Biden’s civil rights claim has been made before. To the point where he had to clarify his past remarks on the matter.

“I was not down marching. I was not down in Selma. I was not anywhere else. I was a suburbanite kid who got a dose of exposure to what was happening to black Americans in my own city,” he said.

Biden also claimed multiple times that he had been arrested while visiting with Nelson Mandela in South Africa.

During an interview with CNN, Biden had to admit it never happened.

“I wasn’t arrested, I was stopped. I was not able to move where I wanted to go,” he said.