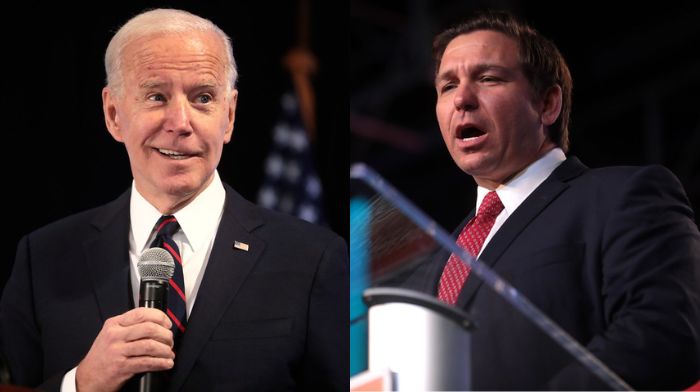 Joe Biden will travel to Florida next week to hold a rally for Democrat candidates. That’s not unusual.

What is unusual is that Biden is reportedly planning to directly aim at popular Republican Governor Ron DeSantis, who has been going back and forth with the President he refers to as “Brandon.”

DeSantis, who is almost certainly a future presidential contender – though maybe not in 2024 – has become a lightning rod for the left after flying illegal immigrants to the progressive island of Martha’s Vineyard.

I hope DeSantis drops a bus load of illegal immigrants outside the Florida Democrat rally when Biden arrives to lie, I mean speak.

Democrats Want Biden To ‘Get Tough’

Reuters points out that Democrats want Biden to act the tough guy against DeSantis.

Biden has tried that in the past, once saying of former President Donald Trump that, ‘If we were in high school, I’d take him behind the gym and beat the hell out of him.’

It didn’t work out great for Biden then, after Trump came roaring back with perhaps his most epic ‘Trumpism’:

Crazy Joe Biden is trying to act like a tough guy. Actually, he is weak, both mentally and physically, and yet he threatens me, for the second time, with physical assault. He doesn’t know me, but he would go down fast and hard, crying all the way. Don’t threaten people Joe!

Nevertheless, Democrats seem to be itching for a fight with DeSantis.

One reason why may be a recent Harvard poll that shows DeSantis beating Trump in a hypothetical Florida primary.

Jennifer Holdsworth is a Democrat consultant. She stated, “I think people are going to look for him to be aggressive. What DeSantis is doing is a horrible thing. And there is no greater juxtaposition than the kindness and humanity of Joe Biden than the, you know, awful, inhumane, bully that is Ron DeSantis.”

Recently, Joe Biden has preached to the Democrat choir in places like Maryland and New York, but Florida may a different story. Biden lost in Florida in 2020, and DeSantis is arguably the second-most popular Republican in the country, behind Trump.

“President Joe Biden will campaign in Florida later this month as he continues criticizing Florida governor Ron DeSantis (R), who is running for reelection.”

Will someone please video the buses bringing democrats from out of state to attend this please!

Making An Example Of DeSantis

There is also a pretty good certainty that Joe Biden will attempt to make Ron DeSantis an “example” of just who exactly, he was referring to in what was billed as his “soul of the nation” speech, where he called “MAGA Republicans” a “threat to democracy.”

In addition to keeping Florida (relatively) open during the pandemic and flying migrants to liberal strongholds like Martha’s Vineyard, Biden will also perhaps pounce on DeSantis for removing special tax status for Disney World.

In Florida, we take what is happening at the southern border seriously.

We are not a sanctuary state, and we will gladly facilitate the transport of illegal immigrants to sanctuary jurisdictions. pic.twitter.com/YeEbMzy8yG

Florida Republicans welcome the visit from Joe Biden, whose poll numbers are underwater there. Evan Power is the chair of the Leon County Republican Party. He says, “The more that Biden comes to Florida, the better it is for the state’s Republican Party.”

Some Florida Democrats in tight races may be thinking the same thing. Joe Biden’s rally will be held in Orlando, but Rep. Val Demmings, who is running against Sen. Marco Rubio, will not be there. Her campaign said her absence would be due to “commitments she has as a U.S. Representative.”

Gubernatorial candidate Charlie Crist on the other hand says he will attend, saying, “I think he’s great. I think he’s doing a great job. He’s my friend. And I’m very proud of him. And he’s going to give our campaign a real shot in the arm.” A Real Clear Politics average poll has incumbent DeSantis up by 4.8 points over Crist.

Charlie Crist may be the only Democrat candidate not distancing himself from Joe Biden. Democrats in tight races all over the country have attempted to distance themselves from Joe Biden and the Democrat Party.

Democrat television ads have repeatedly touted themselves and their records as “going against” Biden and Democrats on issues like crime and taxes. The trend has been to portray themselves as “independent.”