As if coordinated, this week, the governors of several mask-fetish states such as Massachusetts, Oregon, New Jersey, Connecticut, California, and Delaware, announced an end to the state-imposed requirement that serious adults wear a face mask in the public square for the purposes of virtue-signaling.

There is a widespread belief that the mindless defense of a policy that no sane person believes does anything to mitigate the spread of COVID is beginning to cut into approval ratings as we enter an election year and the stank of the Biden White House is starting to attach itself to Democrats across the country.

Even so, there is no indication that Biden or his enablers are anywhere close to throwing in the towel. Instead, they are holding fast to the silly notion that mask wear is anything other than a means of social control and making citizens voluntarily label themselves as either compliant and obedient serfs or as politically unreliable potential enemies. 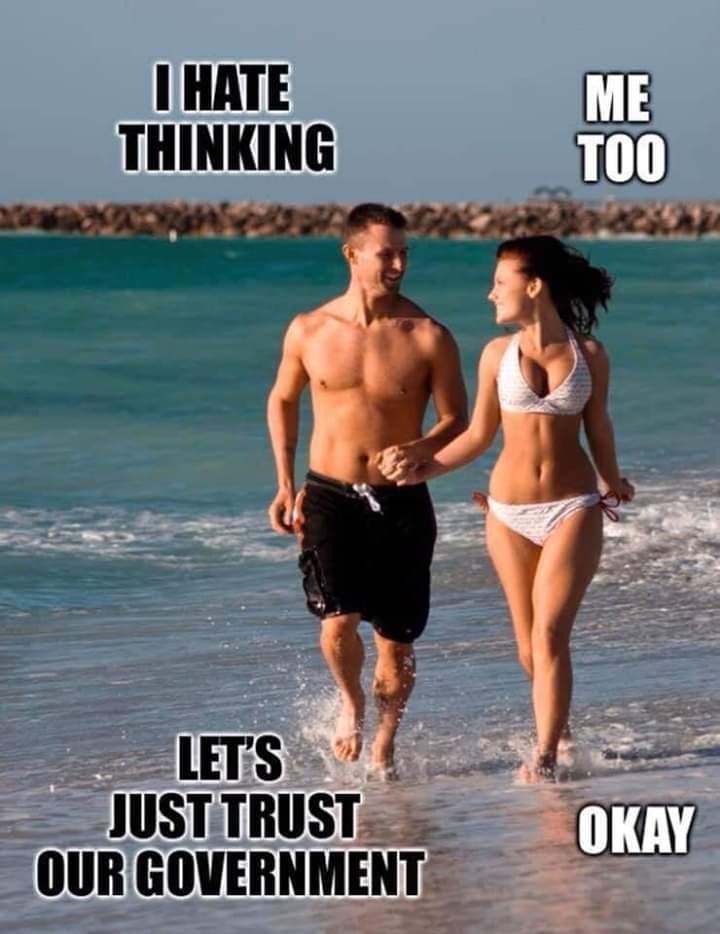 When Biden’s COVID-19 Response Team (hahahaha) gave their briefing this morning, the question of the dichotomy between the CDC’s insistence that most of the nation should be wearing face masks at all times and the actions of many, if not most, state governors was brought up. The important part starts at 16:55.

Q    Thanks.  In the last week, we’ve seen a number of Democratic-led — -run states move back towards normalcy, removing mask mandates.  New York is expected to follow today.  We saw Connecticut, other states lift mask requirements in schools.

You’ve talked a lot about leading — the President trying to lead the nation out of the pandemic, but right now, the federal response seems to be following what a lot of states are doing.  Is the White House planning for emerging — bringing the country out of the pandemic?  And what would that plan look like?

MR. ZIENTS:  Well, thanks for the question.  So while cases and hospitalizations, as Dr. Walensky showed, are trending downward, we do remain focused on fighting the Omicron surge.  So, that’s priority number one.

The President, as I just mentioned, has been clear that we’re moving toward a time when COVID won’t disrupt our daily lives, a time when COVID won’t be a constant crisis so we’re no longer fearing lockdowns and shutdowns, but getting back to safely doing what we all love.  In doing so, we will rely on the powerful set of tools that have been built: the vaccines, the booster shots, treatments, and testing.

For the last several weeks, we’ve been working closely with Secretary Becerra, our team of doctors.  And the White House COVID Response Team under the President’s leadership is reaching out to governors and outside public health experts and doctors and local public health officials on steps we should be taking to keep the country moving forward.

We know that in different areas of the country, cases have fallen more significantly, and this will lead to different approaches and different timing.  And we will continue to coordinate closely with state and local leaders.

This does not sound like someone who is particularly happy with the way things are going. In today’s White House press briefing, Spokesperson Jen Psaki got a similar question and gave a similar answer.

PSAKI: Parents, teachers, and students should still wear a mask in schools regardless of what any state has decided. pic.twitter.com/PVA7puYbEL

QUESTION: So even if the state is not requiring that you wear masks in the schools…

PSAKI: This is where we would advise any American to follow the CDC guidelines. As Dr. Wallensky said, and you referenced, they’re constantly evaluating, rigtht, because the data is changing, the science is changing. It certainly is positive that case numbers have come down, hospitalizations have come down, and they look at all of that information. That’s why it also important to note the difference between leaders who are saying we’re going to leave it up to localities, local school districts to make decisions. No parent who wants to send their kid with a mask should be penalized. No teacher who wants to wear a mask should be penalized or school district that makes that choice should be penalized. A lot of these decisions have been up to local school districts, in the past we have made, we have funded, we have made announcements about a number of mitigation measures which we will work with school districts to continue to implement.

Note that her default is to require everyone to wear face masks. She also dishonestly frames the discussion. There is not a single place in the country that has outlawed face masks. The only issue is the authority of private businesses and state and local governments and school districts to require you to wear a face mask. No one gets penalized for wearing a mask, though maybe we should take that position under advisement, but people are punished for not wearing them.

From this, we can draw a few conclusions.

First, the White House has lost control of at least part of its COVID-19 narrative. His disapproval numbers are beginning to affect Democrats at the state and local level.

Second, the White House has no intention of giving up in its battle to create a “public health” exception to what it sees as problematic items in the Bill of Rights. The battle, however, has shifted to the schoolhouse.

Third, the White House believes its allies in this fight are the teachers’ unions, school administrators, and progressive school boards. It will work with those entities to continue to enforce mask wear in schools. I would contend that it thinks this is a viable strategy because school boards run on a “nonpartisan” basis in most of the country, and so they will not be affected by Biden’s popularity. In that same press briefing, Psaki criticized Florida Governor Ron DeSantis for “standing in the way” of school districts who wanted to continue abusing the kids under their care.

.@JacquiHeinrich on ending mask mandates: “Why are we not hearing the same messaging criticizing states that are…making these moves like we heard previously with…Ron DeSantis?”

Psaki says there’s a “distinct difference” b/c he stood “in the way” of people who wanted to mask pic.twitter.com/CeDKJmi4L9

Fourth, in the near future, we can expect the White House to roll out specific funding programs contingent upon schools maintaining mask mandates. This will have two purposes. It will be an attempt to improve Biden’s popularity and to drive a wedge between governors and school boards.

Why would the Biden White House continue to fight a relatively high-cost and low-reward rearguard action to retain masks in schools? Probably for the same reason, schools have been targeted as locations to spread critical race theory and groom children into aberrant sexual behavior. Teachers and administrators are prone to agree with the policy, and once the indoctrination is complete, a lot of kids will continue the practice as an adult.