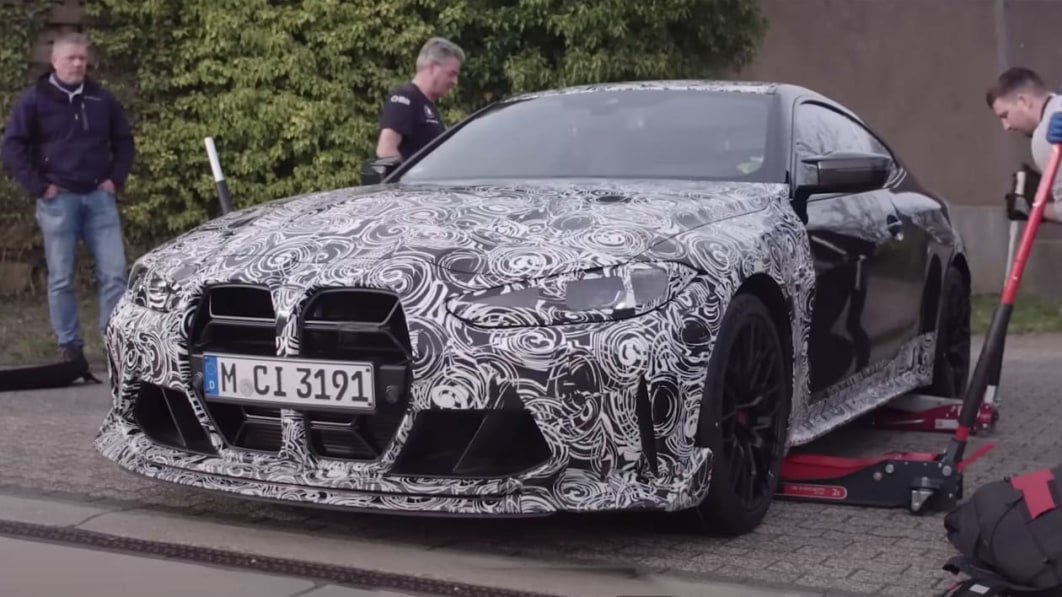 BMW’s M division has its social media maestros going overtime with the uploads. Here again to celebrate the 50th anniversary of Munich’s high-G set is a video of M development driver Jorg Weidinger discussing what’s on tap for the small number of buyers who will get the chance to buy the M4 CSL new off the lot. Weidinger says all of the hard points have been determined now that the coupe is in “late prototype phase,” production test units already coming off the factory line. What remains is the dynamic software tuning to ensure everything works as needed.

Given a few glimpses of the proto in BMW’s garage at the Nurburgring, we can make out a new wheel design that we’re told will be dressed in Michelin Pilot Sport Cup 2 R tires. Behind those, there’s a peek at a massive front carbon ceramic rotor and a ginormous bronze caliper. A titanium exhaust is expected to connect the 3.0-liter inline-six to the quad pipes in back, and help shed some of the reported 220 pounds compared to the stock M4. The development driver says track performance was a huge goal, the M4 CSL already “significantly faster on the track than anything we had before.”

Speaking of faster, we’re told the M4 CSL headed for a debut at the Concorso d’Eleganza Villa d’Este this month won’t be the fastest M4 variant to come this year. Australia’s WhichCar reports that an even more limited edition M4 trim based on the CSL but designed as a Hommage special edition that harks to the first M legend, the CSL known as the “Batmobile.” Supposedly limited to 50 units, it will make another 50 horsepower to tally 600 total, and pair that with 516 pound-feet of torque. The race to 60 miles per hour is said to take 3.5 seconds. Price is rumored to be well into six figures, thanks to the tiny production run. Talk about a 50th anniversary gift.