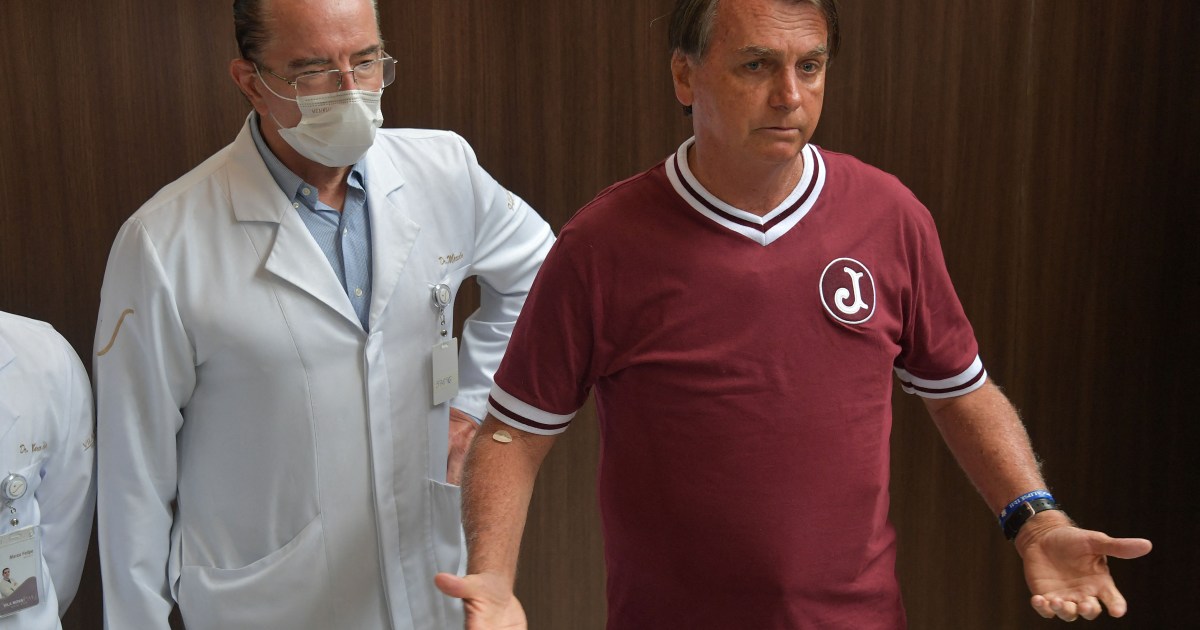 Far-right leader spent two days inside for an intestinal obstruction, his latest complication from a stabbing in 2018.

Brazilian President Jair Bolsonaro has been discharged from hospital two days after being admitted with an intestinal obstruction, his latest health complication from a 2018 stabbing on the campaign trial.

“Being discharged now. Thank you all,” the far-right leader posted on Twitter on Wednesday alongside a religious message and a photo of himself and his doctors giving a thumbs-up gesture.

The president has recovered and is ready for work, his doctor, Antonio Macedo, told reporters. Bolsonaro will be on a special diet on weekends and will not be able to perform intense exercise, Macedo added.

“We instruct patients to chew well, avoid some foods, and we hope to keep the president like that for the next 20, 30 years,” Macedo told reporters in the lobby of Sao Paulo’s Vila Nova Star hospital.

Bolsonaro joked about the difficulty of the restrictions.

“I’ll try to follow them, but life goes on,” he said. “My whole life I was an athlete, in the armed forces, a paratrooper, diver. It’s hard to stay still.”

Bolsonaro, who has been in power since 2019 and plans to stand for re-election in a presidential vote scheduled for October, said he will maintain his regular agenda, including a trip to Russia in February.

He was vacationing in the southern Brazilian state of Santa Catarina when he was urgently taken to the Sao Paulo hospital in the early hours of Monday after suffering from abdominal pain.

Doctors inserted a nasogastric tube and even considered surgery, but the obstruction was cleared on Tuesday.

Bolsonaro has undergone a series of emergency surgeries since being knifed during a campaign event in September 2018.

He said on Twitter on Monday that he had started feeling unwell on Sunday after lunch, noting it was his second hospitalisation “with the same symptoms” in a few months. In July 2021, he was taken to the Vila Nova Star facility for an intestinal blockage after suffering chronic hiccups.

Macedo said Bolsonaro could experience a new gut obstruction in the future.

Bolsonaro, who has been deft at using social media to fire up his base, kept up his online presence during his hospital stay, posting to Facebook, Twitter, Instagram and TikTok.