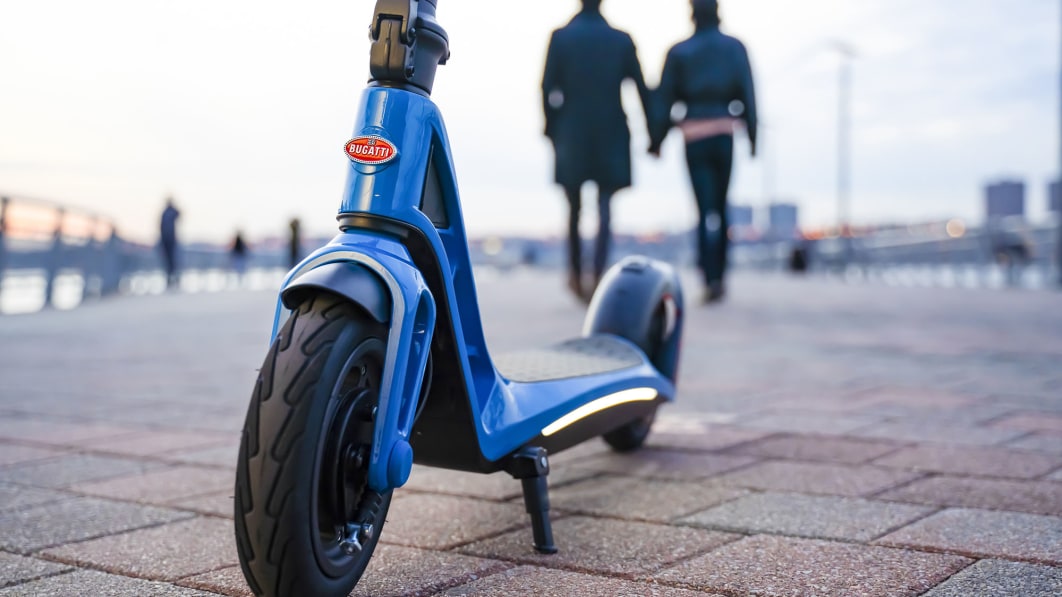 Tales of an entry-level Bugatti have spewed out of the rumor mill for years, but none predicted that the vehicle would have two wheels. The company teamed with Bytech to release an electric scooter that makes the Bugatti name accessible to a much wider audience.

Built around a magnesium-alloy frame, the 35-pound scooter is powered by a 700-watt motor that gives it a top speed of 18.5 mph. Clearly, this is not a Chiron, though it wasn’t designed to be one. Note that the aforementioned velocity can only be reached when the rider selects a mode called Sport. Leave it in Economy mode and you’ll max out at 9 mph; City unlocks 12.5 mph.

Cruise control comes standard, and Bugatti notes its scooter is capable of riding up a 15-degree slope and carrying 242 pounds. The battery stores enough electricity for about 22 miles of range. It can be removed, and charging it takes four hours when using a household outlet.

For context, one of the many unlikely entrants into the electric scooter arena is MV Agusta, an Italian company more commonly associated with high-performance, race-ready motorcycles. Its scooter (which is described as “the Italian stallion of the e-scooter world”) weighs 44 pounds, has a 25-mph top speed, and can carry riders weighing up to 220 pounds. The 500-watt motor delivers 18 pound-feet of torque.

Design-wise, it’s a, well … a scooter. You didn’t think it would borrow styling cues from the Divo, did you? There’s a Bugatti emblem on the front end, and the front turn signals are positioned on the outer parts of the handlebar for better visibility. LED strips illuminate the bottom part of the riding platform, while a rear-mounted light projects Bugatti’s “EB” logo onto the ground. Just like in a Bugatti car, you’ll be seen.

We don’t know when the Bugatti scooter will go on sale or how much it will cost. However, buyers will have three colors to choose from: Agile Blue, silver, and black. It’s not quite the baby Chiron we were expecting, but it’s a good conversation starter: “I got here with my Bugatti.”

Here’s the 2023 Ford Maverick Tremor in the flesh

2023 Jeep Grand Cherokee Review: Something for all, from 4xe Trailhawk to three-row L

Here’s the 2023 Ford Maverick Tremor in the flesh

2023 Jeep Grand Cherokee Review: Something for all, from 4xe Trailhawk to three-row L