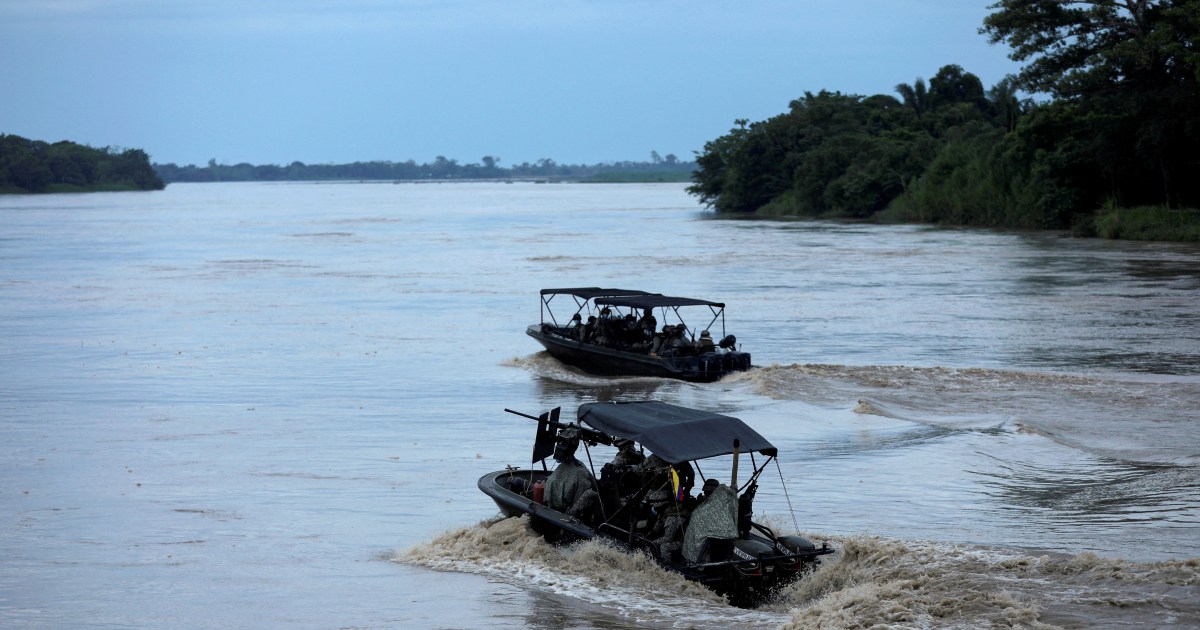 Sources told Al Jazeera that most of those killed on Sunday in Colombia’s eastern Arauca department are thought to be Revolutionary Armed Forces of Colombia (FARC) dissidents and members of the National Liberation Army (ELN).

Some FARC members rejected a 2016 peace deal that saw the group demobilise, bringing an end to five decades of armed conflict in the country, and the dissidents announced a return to arms in 2018. The ELN is Colombia’s largest remaining armed rebel group.

Late on Sunday, Colombia’s human rights ombudsman’s office expressed “deep concern for the escalation of the armed conflict in Arauca due to the confrontation between illegal armed groups that put the civilian population at grave risk”.

The office called on local authorities to be present and protect civilians in the border area, which has seen an uptick in violence linked to armed groups since early 2021.

“In the last few hours there have been homicides, threats, illegal detentions, mass displacements and risk of forced displacement in border municipalities, specifically in Tame, Fortul, Saravena and Arauquita,” it said.

The Colombian president’s office has yet to release a death toll from the violence on Sunday.

Juan Carlos Villate, a government official who deals with human rights issues in Arauca, told the local W Radio station on Monday morning that “the number [of deaths] could increase to 50”. Villate said the violence was the worst he had seen in the region in the last 10 years.

Meanwhile, Arauca’s mayor, Etelivar Torres Vargas, said in a statement on Sunday that he “strongly rejects the violent events”, which he said “directly caused shock, fear and anxiety [among] local inhabitants”.

Colombian President Ivan Duque said a meeting with security officials was held since the violence broke out, while security reinforcements were sent to Arauca in the aftermath of the clashes.

Defence Minister Diego Molano also said on Monday that another meeting would take place in Arauca in the afternoon on how to best protect the local population and control the border area with Venezuela.

Adam Isaacson, a researcher at the Washington Office on Latin America think-tank, said the fighting may have broken out over control of Arauca, a hugely strategic department that shares a long, uncontrolled border with Venezuela.

“Everything from drugs, to stolen cattle, to kidnapped people crosses,” he told Al Jazeera. “Armed groups tax everything, even beer and food. Also, there’s a lot of oil in Arauca, which means there’s a lot of extractive businesses that armed groups could extort.”

Isaacson said Arauca is a stronghold of the ELN inside Colombia, and that when he visited in 2019, he was told a non-aggression truce between the ELN and FARC dissidents was in place there.

“That non-aggression agreement is clearly over as of this past weekend,” he said. “Why now? Probably the ex-FARC have gotten stronger, especially the 10th Front dissidents who stood their ground against the Venezuelan forces last year, and now they have a bigger presence.”

Juan Pappier, a senior Americas researcher at Human Rights Watch, told Al Jazeera that the alliance between the ELN and the Martin Villa 10th Front, a FARC dissident group, “appears to be breaking apart”.

“For years, the conflict between the FARC and ELN tormented people in Arauca and Apure. They can’t be left to their own devices as a new version of this conflict appears to [be coming] alive in the region.”

“We don’t know which groups went on the offensive or what triggered it, or whether this is just a flare-up or the beginning of a new war,” he said. “But certainly from this past weekend, if the death toll and displacement numbers we are seeing are at all accurate, this is one of the most serious humanitarian situations we have seen in Colombia in recent years.”

This Gas Chain Is Dropping Their Gas Prices by a Dollar a Gallon, but You Only Have a Few Days to Snag the Deal
Arson Suspected as 145-Year-Old West Virginia Church Building Gets Burned to the Ground
Putin condemns NATO’s ‘imperial ambitions’, warns Finland, Sweden
Russia-Ukraine live news: Attacks continue on Kharkiv, Mykolaiv
Trump, Secret Service agent confirmed main elements of bombshell Jan. 6 fight over driving to Capitol
R. Kelly funneled millions of dollars from music royalties through a childhood friend right before his sex-trafficking conviction, prosecutors allege
Share This Post
Comment

This Gas Chain Is Dropping Their Gas Prices by a Dollar a Gallon, but You Only Have a Few Days to Snag the Deal

This Gas Chain Is Dropping Their Gas Prices by a Dollar a Gallon, but You Only Have a Few Days to Snag the Deal

Authorities in Beaver, West Virginia are investigating a possible arson attack after a historic church…

The United Kingdom will provide another 1 billion pounds ($1.2bn) of military support to Ukraine,…