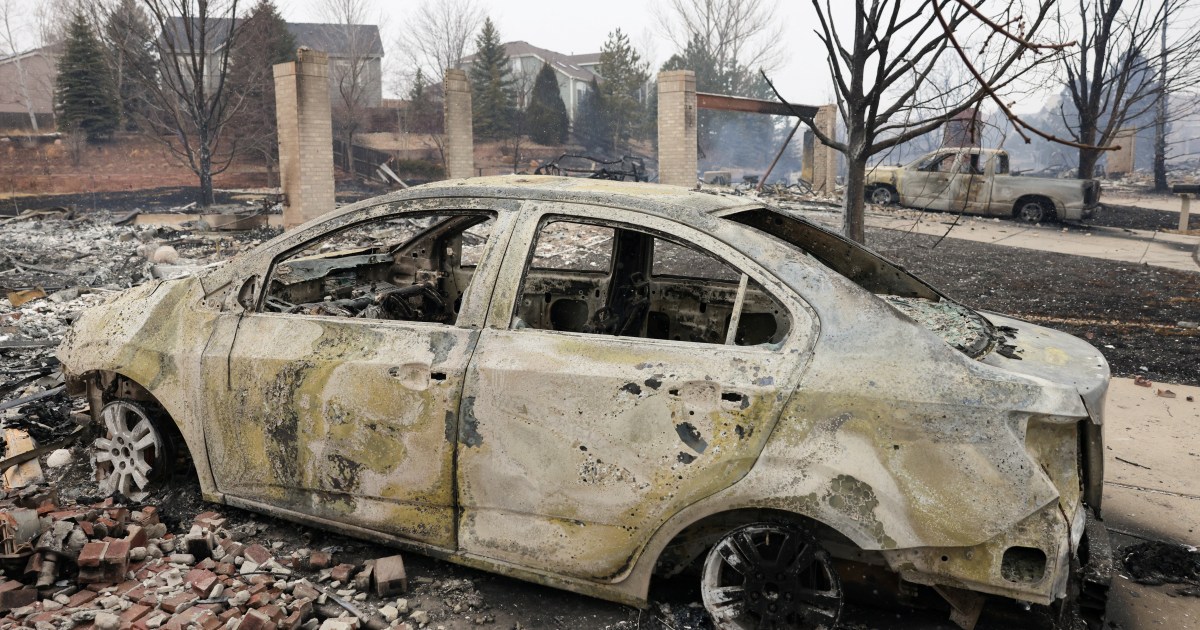 Authorities say they are still investigating the cause of the blaze, which destroyed nearly 1,000 homes in US state.

Two people remain missing after an enormous fire destroyed nearly 1,000 homes in the US state of Colorado, where authorities continue to investigate the source of the blaze and distraught survivors return to inspect the damage.

The blaze broke out on Thursday on the northern outskirts of Denver and spread rapidly with the help of high winds. Entire neighbourhoods in the towns of Superior and Louisville, Colorado, were destroyed.

Rex Hickman, who had evacuated the area with his wife and son, said he was heartbroken to discover that there was nothing left of their home of 23 years.

“There’s a numbness that hits you first. You know, kind of like you go into crisis mode. You think about what you can do, what you can’t do,” he told The Associated Press news agency. “The real pain is going to sink in over time.”

Hickman said he and his family have to find a rental home and clothes in the short term; their insurance company told them on Sunday that it would take at least two years to rebuild the home.

Louisville resident Paul Bassis, whose home was spared by the fire, called the damage to the town “heartbreaking”.

“People lost all their belongings, their memories that were in those homes, families that were raised there,” he told Al Jazeera.

Boulder County Sheriff Joe Pelle has refused to comment on whether the fire was arson, but he said authorities had executed a search warrant at “one particular location” and are pursuing tips about the cause of the blaze.

“It’s complicated and it’s all covered with a foot of snow,” Pelle said on Sunday of the scene where the fire started. “The outcome of that investigation is vital – there is so much at stake. We are going to be professional. We are going to be careful.”

Pelle said two people who lived in homes that were consumed by the fire are still missing. A third person who had been unaccounted for was found unharmed.

“Assistance can include grants for temporary housing and home repairs, low-cost loans to cover uninsured property losses and other programs to help individuals and business owners recover from the effects of the disaster,” the Federal Emergency Management Agency (FEMA) said in a statement.

The White House had said on Friday that Biden held a phone call with Colorado Governor Jared Polis and pledged that “every effort will be made to provide immediate help to people in the impacted communities”.

Polis visited some of the damaged neighbourhoods on Sunday.

“I know this is a hard time in your life if you’ve lost everything or you don’t even know what you lost,” Polis said after the tour. “A few days ago you were celebrating Christmas at home and hanging your stockings and now home and hearth have been destroyed.”