Home News COVID: What we know so far about the Omicron subvariant BA.2

As the highly transmissible Omicron variant of the coronavirus continues its frenetic spread around the world, a new subvariant has been detected in dozens of countries.

Omicron was first reported by South Africa in November and has since replaced the Delta variant in most countries as the most prevalent strain.

The dominant form of Omicron, known as BA.1, continues to account for the vast majority of confirmed new COVID-19 infections globally, but another subvariant, known as BA.2, has begun to outcompete it in some places.

Some early studies have shown BA.2 appears to be more transmissible than the dominant BA.1 subvariant – leading scientists to ramp up their investigations.

The strain is being closely watched in countries including Denmark, India and Nepal where it has become dominant, according to the World Health Organization (WHO).

Here is what we know so far:

What is the BA.2 subvariant?

The BA.2 strain is one of several sublineages of the Omicron variant identified so far, which also include BA.1 and BA.3.

The BA.1 version has caused the highest number of Omicron COVID-19 cases globally. As of January 31, BA.1 comprised 96.4 percent of sequences submitted to the Global Initiative on Sharing All Influenza Data, the WHO reported.

According to the director of the UCL Genetics Institute in London, Francois Balloux, BA.1 and BA.2 are some 20 mutations – a change in DNA sequence that leads to genetic variation – apart.

Moreover, BA.2 has been dubbed as the “stealth variant”, as it lacks a genetic deletion on the spike protein – part of the virus that enters human cells – making it harder to track using polymerase chain reaction (PCR) testing. 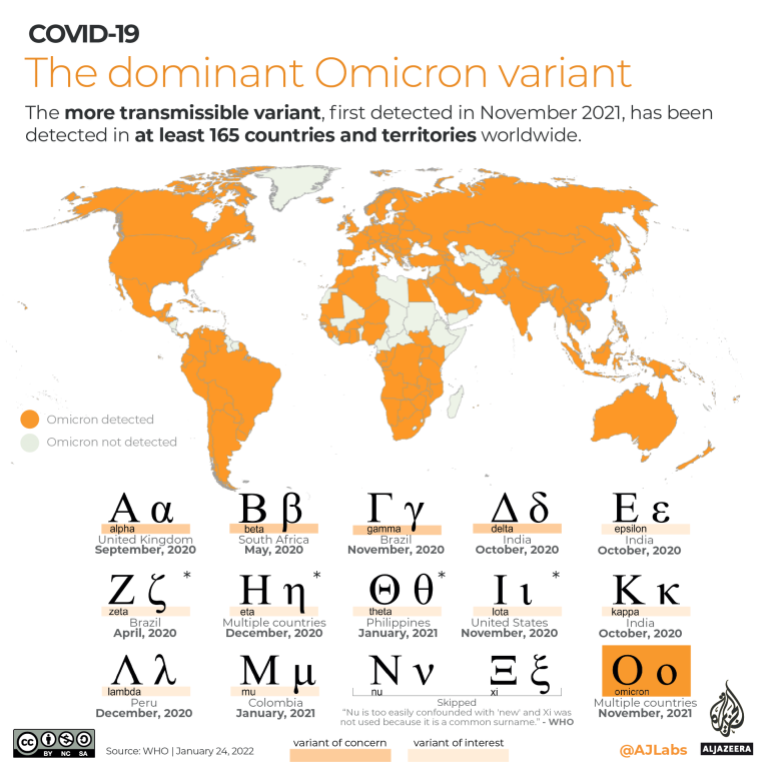 Where has it been detected?

The BA.2 strain was first reported in South Africa in November. According to the WHO, it has since been detected in at least 57 countries as of January 31.

In Denmark, the subvariant has seen exponential growth, replacing the BA.1 strain last month, accounting for some 82 percent of Omicron cases.

The variant has also been detected in the United States, the Philippines, Norway and Canada.

Is it more transmissible?

According to experts in the United Kingdom and Denmark, the BA.2 variant is seemingly more transmissible than other sublineages.

In a technical paper published by the UK Health Security Agency (UKHSA), data collected from contact tracing indicated higher transmission among contacts of BA.2 cases at 13.4 percent, compared to 10.3 percent for households of other Omicron infections.

A recent study in Denmark also appeared to show that BA.2 was more transmissible than BA.1.

The Statens Serum Institut study analysed the transmission of COVID-19 in more than 8,500 Danish households between December and January and found that BA.2 was “significantly more transmissible than BA.1”, the authors told Al Jazeera.

“If the household was infected with Omicron BA.2, 42 percent of the household contacts tested positive within 14 days,” lead author Frederik Plesner Lyngse said via email.

Does it cause more severe disease?

Based on the data from Denmark, Boris Pavlin of the WHO’s COVID-19 Response Team said this week there appeared to be no difference in disease severity caused by the two subvariants.

“This is evidenced by direct clinical data from Denmark where BA.2 overtook BA.1. Also looking at other countries where BA.2 is now overtaking BA.1, we’re not seeing any higher bumps in hospitalisations than expected,” he said.

Meera Chand of the UKHSA said in late January that there was “insufficient evidence” to determine whether BA.2 leads to more severe illness than BA.1.

Can it evade vaccines?

According to the Danish study, which is yet to be peer-reviewed, BA.2 possess “immune-evasive properties that further reduce the protective effect of vaccination against infection”, lead author Lyngse said.

However, he said: “We did not investigate the effect of vaccination against severity i.e symptomatic infection, hospitalisation, mortality.”

Meanwhile, the UKHSA found there was no statistical difference in vaccine effectiveness between BA.1 and BA.2, while pointing out that the number of cases investigated was “relatively small”.

Is it a cause for concern?

Angela Rasmussen, a virologist at the University of Saskatchewan, said it was “unclear” if BA.2 was a cause for alarm.

“It doesn’t seem to be gaining ground in the US similar to what was seen in Denmark,” she told Al Jazeera.

“The biggest issue in my view is that it will prolong the surge in cases caused by BA.1 – but again, that doesn’t appear to be happening in the US right now.”

The WHO in a weekly update on February 1 said further investigations into the features of BA.2, including transmissibility, immune escape properties and virulence, should be prioritised independently (and comparatively) to BA.1.

The UN COVID Technical Lead on BA.2 Maria Van Kerkhove in a press briefing said people need to be aware that COVID-19 is “continuing to circulate and it is continuing to evolve”.

“That’s why it is really important that we take measures to reduce our exposure to this virus, whatever variant is circulating, and Omicron is becoming dominant worldwide,” she said.