Home News Democrat Rep. Katie Porter Reveals Her Colleagues Are Clueless About Skyrocketing Prices: ‘Not Seeing It In the Polls’ 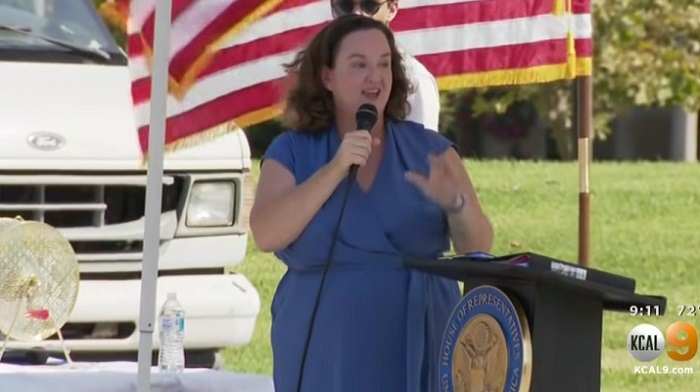 In fact, according to Politico, the California Democrat herself seemingly didn’t realize what was happening with inflation and skyrocketing prices on everyday products until she tried to buy a pound of bacon.

“Only after [Porter] put bacon in her cart at her local grocery store recently did she notice that its price had spiked to $9.99 a pound,” Politico writes. “Reluctantly, she put the package back.”

Americans have more frequently been running into that same problem – once you read the price tag on items you were able to purchase without concern before and see how high it’s gone, it goes back on the shelf or in the cooler.

Porter brought her concerns back to her Democrat colleagues where it became apparent they had no idea of the personal toll President Biden’s economy was taking on people.

One might sympathize with Porter, but Politico doesn’t mention that Porter is a millionaire and has a $174,000 a year salary. Instead, she continues to act like she is one of us.https://t.co/PSpedD8kxn

Katie Porter Delivers the Bad News on Inflation to Democrats

The Politico report is fascinating as it delves into what happened next when Katie Porter tried to broach the topic of inflation with her colleagues just last week.

They didn’t seem to have a clue.

Porter reportedly gave “an emotional speech” about how skyrocketing prices have dealt a blow to her own family for months during a private House Democratic Caucus.

She said, “It seemed like the first time the personal toll of high consumer prices had sunk in for some lawmakers in the room.”

Only after Rep. Katie Porter put bacon in her grocery cart did she notice its price had spiked to $9.99/lb. Reluctantly, she put it back.

Porter also conveys during the interview that some Democrats are so out of touch with the American people that they dismissed concerns about inflation because it wasn’t a factor in their polling.

“Too often, Congress recognizes issues too late,” she warned. “I had a colleague mention to me, ‘We’re not seeing it in the polls’ … Well, you don’t know what to ask.”

What I’m telling colleagues and reporters: Food prices are a real pain point for families. People, myself included, are shopping differently, putting back $6.29 boxes of cereal and spending considerable time looking for sandwich bread for under $5. (2/5)https://t.co/VGZbsVw5lI

Democrats Have a Messaging Problem

The Politico report reveals that Porter has concerns about Democrat messaging. The responses from her colleagues seem to indicate they have miles to go when it comes to “assure(ing) voters they understand everyday anxieties.”

Those messaging concerns were reported by The Political Insider back in December in a column analyzing a Democrat pollster who found “voters found Democrats were too focused on social issues and not enough on the economy.”

Of Democrat candidates running in the midterms, the pollster said he would advise them “we have a problem.”

Remember those focus groups of Va voters @BrianStryker did before Thanksgiving? I talked to him about what he heard, and didn’t hear, and how Dems should be thinking about 2022https://t.co/ELS2rPnT1X

Prior to that, legendary Democratic strategist James Carville slammed his party for allowing woke progressive extremists to hijack messaging by focusing on “defund the police” rhetoric and “stupid wokeness” rather than what Americans actually care about.

A follow-up piece by the Political Insider pointed out further messaging issues with the Democrat Party on the economy, with one strategist who advises major donors to the party indicating – rather bluntly – it was a lost cause.

“Voters couldn’t name anything that Democrats had done, except a few who said we passed the infrastructure bill,” according to a center-left group.

As for that infrastructure ‘accomplishment’? Could they sell that to the financially battered American people?

I’ve tweeted since day one that Biden’s cabinet & policies being shoved down the throat of voters will have significant consequences for democrats. Its too late to salvage 2022 https://t.co/viMyAGb1gA

Before we go handing out kudos to Representative Katie Porter for trying to wake her party up to the fact that inflation is breaking the backs of the American people, it’s important to note that the congresswoman still seems to be in her own stupor.

In an interview with MSNBC’s Lawrence O’Donnell, Porter argued that inflation reinforces the need for abortion in this country.

“I don’t think they compare. I think they actually reinforce each other,” she said on the topics of abortion and inflation.

“So the fact that things like inflation can happen and it can become more expensive to feed your kids and to fuel your car is exactly why people need to be able to be in charge of how many mouths their going to have to feed,” she argued.

Porter’s colleagues actually shamed her a bit in the Politico column, noting they were surprised by her emotional outburst on inflation considering she’s pretty wealthy.

“A few in the room during that Democratic caucus meeting said privately they were surprised by Porter’s emotional remarks about the price of food given her $174,000-a-year congressional salary,” Politico reported.

Her net worth, according to Open Secrets, was over $1 million back in 2018.

Recently a tearful Rep. Katie Porter (D-CA) told colleagues how inflation is affecting her as a single mom, said they’re out of touch

If they can’t even relate to their own colleague’s financial stress, how are Democrats going to relate to yours?

Democrats are riding high right now, at least in their own minds. On Sunday, the…

The Breitbart Doctrine says that politics is downstream from culture. This, if true, poses a…