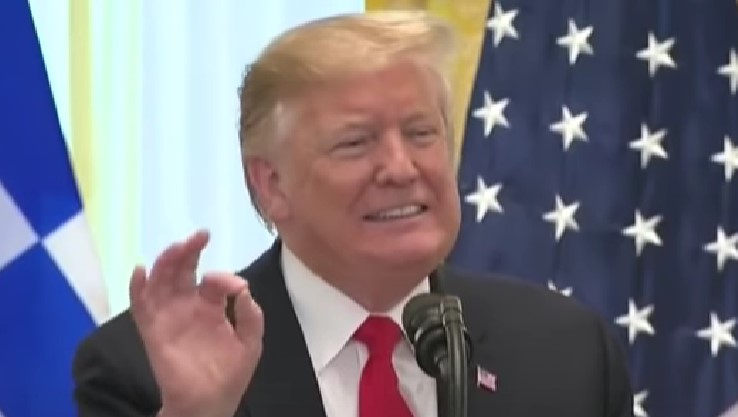 Goldman, who served as lead majority counsel in the first impeachment inquiry and lead counsel to House Managers in the subsequent impeachment trial of the former President, was first up.

And Trump wasn’t going to let a little thing like repeated failure in the impeachment cases sway him from ‘endorsing’ Goldman in his primary for the 10th Congressional District.

“Lawyer Dan Goldman is running for Congress, NY-10, and it is my great honor to Strongly Endorse him,” Trump wrote.  I do this not because of the fact that he headed up the Impeachment Committee and lost, but because he was honorable, fair, and highly intelligent.”

The former President went on to ‘praise’ Goldman for “working so tirelessly to stop ‘Trump.’”

“He was not easy to beat, but winning against him made me realize just how very talented I am!” the sarcasm-laced post concluded.

This is somehow not fake. pic.twitter.com/DUQV0r8cAY

“A vote for Carolyn Maloney in NY-12 is a vote for the future!” he declared.

“On the other hand, Jerry Nadler is likewise a hard driving man of the people, whose energy and attention to detail is unlike anyone else in Congress,” added Trump. “He is high energy, sharp, quick-witted, and bright.”

I mean, who else could have pulled off such a stealth, yet high-energy departure off stage, using their quick wit to distract from whatever was happening with his pants at the time?

“You can’t go wrong with either,” Trump added, “but Carolyn Maloney is the better man.”

RELATED: Liz Cheney Lost: Here Are 10 Times She Embarrassed Herself As An Anti-Trump Fanatic

Their Responses Were Just as Hilarious

Of course, being robots programmed only to get votes, unable to detect sarcasm and unwilling to ignore Trump’s ‘endorsement,’ both Democrats had to scramble and issue a statement distancing themselves from the former President.

“Last week Donald Trump attacked Dan Goldman, who led his impeachment. Now he’s pretending to endorse Goldman. True to form, Trump is trying to meddle in an election,” the Goldman campaign fired back.

I’m coming for you, Donald. pic.twitter.com/qCxxykBBRJ

“This is a pathetic attempt at fooling Democrats who are far smarter than Trump is, and it’s clear that only one candidate in NY-10 is living rent-free in Trump’s head,” the statement continued, unaware that Trump was clearly living rent-free in Goldman’s head.

“Buckle up Donald. Dan’s coming for you,” it hilariously warned.

Maloney meanwhile, also had to issue a statement knowing that Democrat voters aren’t, as Goldman suggests, all that bright and capable of seeing through Trump’s sarcasm.

“This is laughable and I reject any endorsement from Donald Trump,” she tweeted. “Trump doesn’t respect women. He instigated the attacks on January 6th and claimed that the 2020 election was a big lie.”

🧵🧵This is laughable and I reject any endorsement from Donald Trump.

Trump doesn’t respect women. He instigated the attacks on January 6th and claimed that the 2020 election was a big lie. https://t.co/Kwcn02b9M3

That letter seeks a national security damage assessment on the documents seized from Mar-a-Lago.

The congressional primaries in New York will be held on August 23rd.