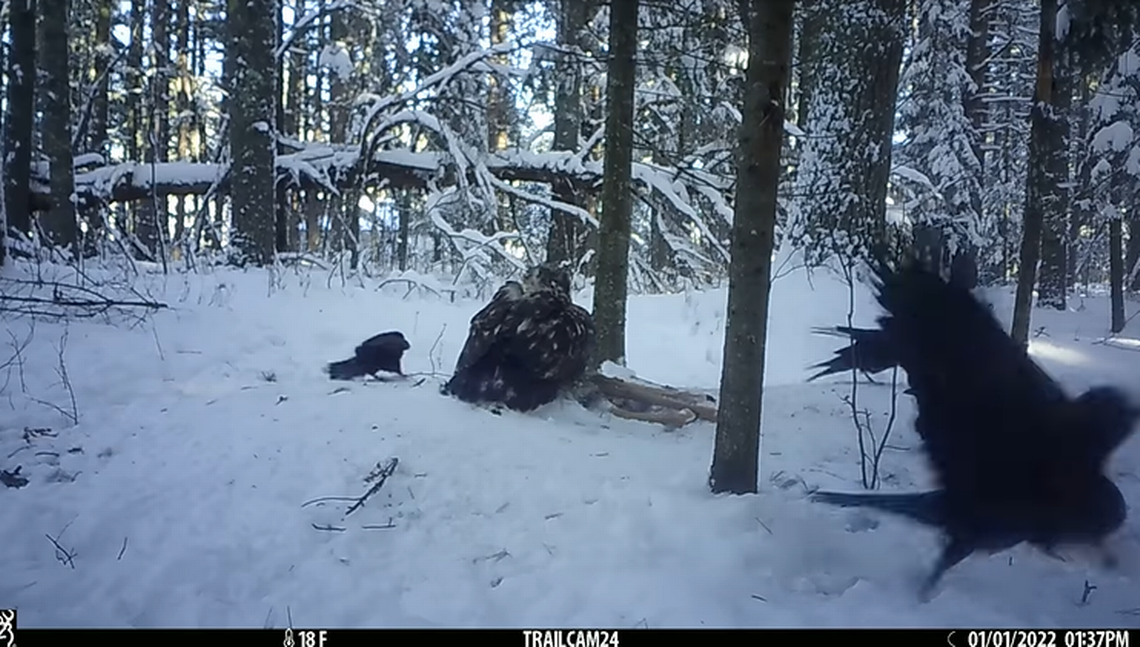 A young bald eagle was recorded on a trail camera enjoying deer carcass in peace, when the silence of the snow-covered woods was suddenly broken — and its feast violently stolen.

In the video, taken Jan. 1 in northern Minnesota, the eagle is seen picking away at the deer, according to Gary Peterson, who captured the video and shared it on Facebook.

The eagle hasn’t yet developed its iconic coloration, which generally happens around 4 to 5 years of age, according to the U.S. Fish and Wildlife Service. Despite its youth, the bird still far outsizes the squadron of ravens hopping and fluttering around it, waiting for their chance to nab a few beakfuls of food.

The pecking order seems established, until another eagle, larger and older, swoops in from out of frame and tackles the competition, the video shows.

“Wow. The boss has arrived!” one commenter wrote on Peterson’s post.

In a split second, the attacker has the surprised young eagle on its back. The two fight, flapping and kicking and squawking at each other for a moment, until the smaller bird regains its footing.

Separated with the carcass between them, they seem to stare one another down before the aggressor flaps over toward the other eagle, forcing it to retreat.

Victorious, the mature bald eagle walks over to the feast and lets out several high-pitched chirps.

“No matter how big and fierce you are, there’s always someone bigger and fiercer!” a comment on the post read.

“Amazing interaction to capture!” said another. “Pretty clear who the boss is.”

While bald eagles are great hunters, they are also known to scavenge already dead animals from time to time, according to the National Wildlife Federation.

‘What is that?’ Rare white deer wanders past hunter in Illinois woods, video shows

By investing in Gazprom (GZPFY), Rosneft and Lukoil, Kingdom was likely seeking undervalued assets, but…

The two unveiled the US-Taiwan Initiative of 21st Century Trade in June, soon after Taiwan…