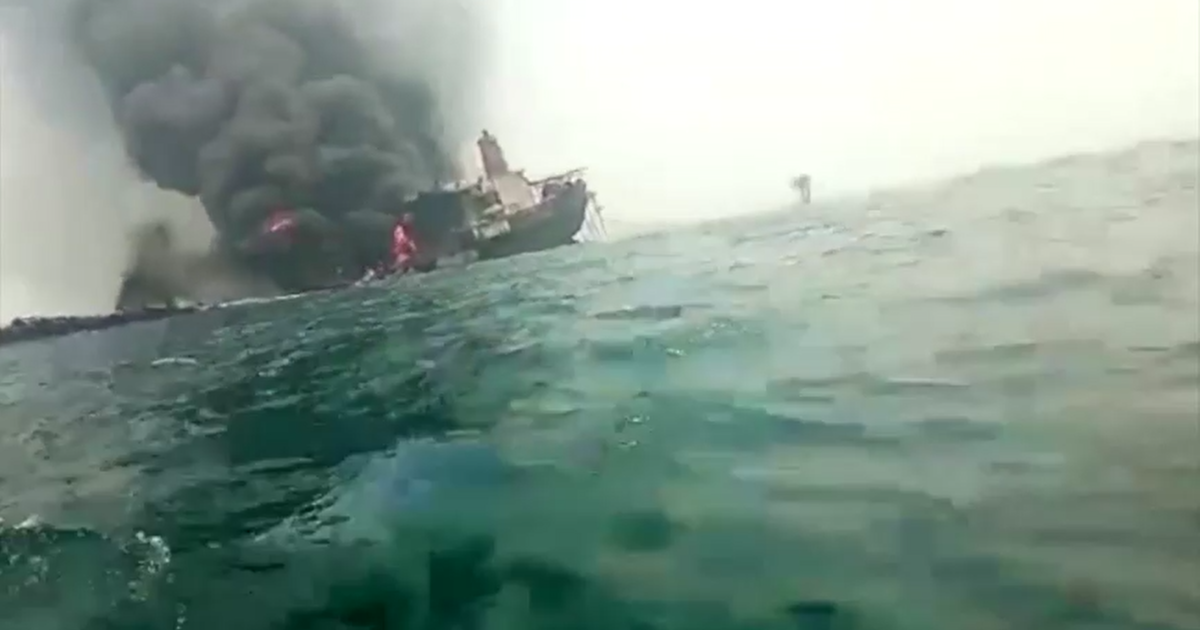 While the extent of the damage is not clear yet, the boat can process 22,000 barrels of oil a day and store up to 2 million.

A vessel with a storage capacity of two million barrels of oil has exploded off the coast of southern Nigeria’s Delta state, raising fears of an environmental disaster and concerns about the fate of its crew.

Shebah Exploration & Production Company Ltd (SEPCOL) said on Thursday that flames had engulfed the Trinity Spirit following the blast a day earlier. The floating production, storage and offloading vessel can process up to 22,000 barrels of oil a day, according to the operator’s website.

The vessel was located at the Ukpokiti Terminal, along the coast of the oil-rich Niger Delta region.

Joe Sunday, an assistant boat driver, said he was in one of the two speedboats out at sea on Wednesday morning to pick some crew who were due to take time off from work but could not reach the vessel because it was consumed by fire.

“We drove round to see if we could see people but we did not see anybody and the fire was still blazing,” Sunday told Reuters news agency at a port in Warri.

Tiby Tea, chairman of Maritime Union for Nigerian Ports Authority in Warri, confirmed that two boats sent out to the vessel could not find anyone.

“At this time there are no reported fatalities but we can confirm that there were 10 crewmen on board the vessel prior to the incident,” SEPCOL Chief Executive Ikemefuna Okafor said in a statement.

An investigation was under way to determine the cause of the accident, he said, adding that the company was working to “contain the situation”.

Nigeria’s regulatory agency for upstream operations, NUPRC, said the explosion had led to a “major fire” and that it had “commenced investigations into the incident”.

“The commission will take necessary measures to ensure that all safety and environmental measures … to safeguard lives and the environment are put in place,” spokesman Paul Osu said.

Environmental activists were, however, worried about the potential impact.

“There will definitely be a spill,” said Mike Karikpo of the local NGO, Environmental Rights Action/Friends of the Earth Nigeria.

“This is a facility that handles over 20,000 barrels per day … the oil will reach the surrounding communities.”

Nigeria🇳🇬 government just a quick reminder that “WE CANNOT EAT COAL, NON DRINk OIL” oil spill is a worrisome issue and this is the time to keep the “OIL IN THE SOIL” — Majority of #fossilfuels need to stay underground to avert climate disaster. #ClimateActionNow #Fridays4Future pic.twitter.com/lIA6REPkBu

Since the 1970s, the oil-rich Niger Delta region has accounted for an overwhelming majority of Nigeria’s earnings.

But the region continues to suffer the multiplier effect of decades of environmental degradation, which has eroded livelihoods and deprived residents of basic essentials such as access to clean drinking water. The area’s mangroves and swamps have become uninhabitable for many species and the average human life expectancy is also 10 years lower in the Delta than elsewhere in Nigeria.

Although Nigeria is Africa’s largest crude producer, operating costs are high due to frequent accidents and widespread insecurity, although most accidents take place on land.

There have also been attacks on oil installations in the past, piercing pipelines to take crude oil and increasing kidnappings to obtain a ransom.

Nigerian pirates are also active across the wider and resource-rich Gulf of Guinea region, disrupting shipping in a vast area stretching from Senegal to Angola.

American consumers spent more in August, as prices rose
US envoy ‘will not be admitted’ to Nicaragua, vice president says
ONDC to Get Many More Apps Onboard in Coming Weeks as Beta Testing Begins in Bengaluru
5G Telecom Services to Launch in India on October 1: Things to Expect from the Rollout
Thousands attend funeral for 7-year-old who died, Palestinians say, in Israeli troops chase
Iranian security forces arrest a woman for eating at restaurant in public without her hijab, family says
Share This Post
Comment

US envoy ‘will not be admitted’ to Nicaragua, vice president says

5G Telecom Services to Launch in India on October 1: Things to Expect from the Rollout
Thousands attend funeral for 7-year-old who died, Palestinians say, in Israeli troops chase
Iranian security forces arrest a woman for eating at restaurant in public without her hijab, family says

Consumers spent a bit more in August than the previous month, a sign the economy…

US envoy ‘will not be admitted’ to Nicaragua, vice president says

5G Telecom Services to Launch in India on October 1: Things to Expect from the Rollout

Share This Post
Iranian security forces arrest a woman for eating at restaurant in public without her hijab, family says