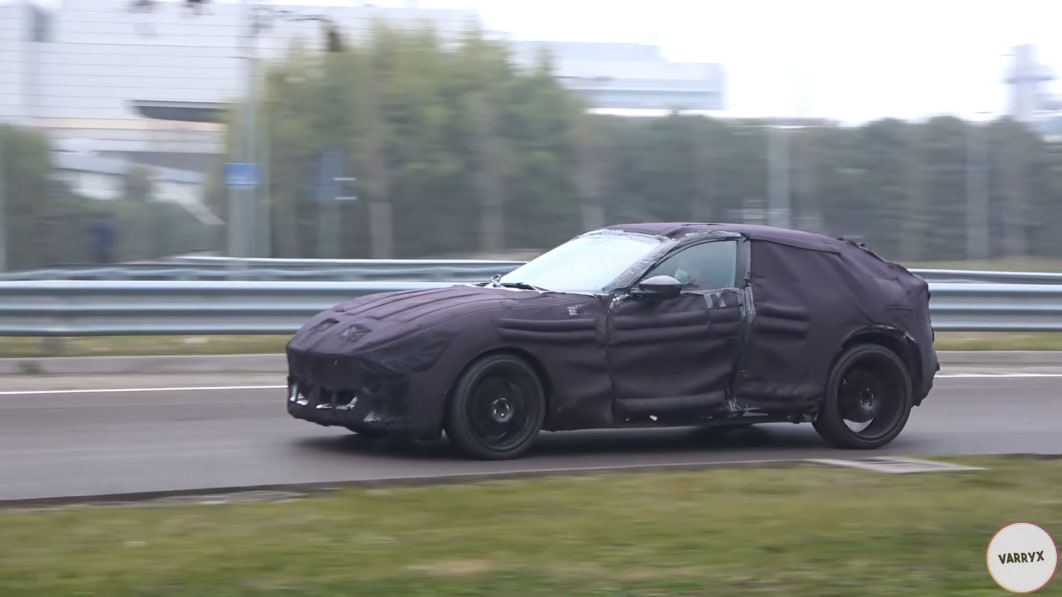 The Ferrari Purosangue crossover is only months away from the assembly line, so says the Italian automaker’s 2021 annual report. In the report’s section on 2022 guidance, we’re informed, “Ferrari Daytona SP3 and Ferrari Purosangue will commence production in 2022 with deliveries starting in 2023.” After trotting out mules draped in a mashup of Ferrari and Maserati body panels, prototypes in heavily camouflaged production bodywork have been caught around Maranello. Based on the roofline we imagine we can see under the masking panels in video from YouTube user Varryx, it appears the Purosangue will wear a very fast rear profile. That lengthy span from the B-pillar to the rear end could make for roomy rear quarters; luggage space under that sloping backlight might take a hit, though.

Up front, the Purosangue’s motivation continues to be a mystery; basically, every powertrain Ferrari makes has been a rumored candidate. A version with the 2.9-liter twin-turbo V6 hybrid powertrain from the 296 GTB could make the Ferrari Utility Vehicle (FUV) the most powerful OEM crossover in existence, splitting the difference of the Aston Martin DBX707’s 697 horsepower and 663 pound-feet of torque with 819 hp and 546 lb-ft. There are 3.9-liter and 4.0-liter V8s to choose from, with and without hybrid assistance, and a naturally aspirated V12, too. Just employing the 296 GTB’s V6 mill without electric assistance would provide a fulsome 654 horsepower. As we see it, there are no wrong answers here. If it does emerge as a hybrid in initial guise, a bigger battery providing substantial electric-only driving range would be nice, though.

Not that Ferrari will be concerned with its new model’s reception no matter what’s under the hood, the luxury house coming off its best year ever with 11,155 cars sold in 2021. In a world where an electric Volkswagen crossover is still being sold with five-figure markups, we expect Purosangue production will be sold out immediately and for years. Last year’s Ferrari sales reflected an increase of more than 22% on 2020, more than 10% on the pre-pandemic year of 2019. Sales of 12-cylinder models dipped 16.1 percent with the departure of the 812 Superfast, but the V8 range was stood ready to remedy the hiccup. Profit margin on the roughly 4.8 billion euros in revenue was an envy-making 35.9%. There’s more in the works as well, with brand CEO Benedetto Vigna telling investors and analysts to expect announcements during Capital Markets Day, taking place in Maranello on June 16.