Home News Former Afghan President was given 'no more than two minutes' to get ready to flee Kabul
Ghani told BBC’s Radio 4 “Today” program that his national security adviser informed him he must leave and that the departure was “really sudden,” adding that it was “only when we took off, it became clear that we were leaving” Afghanistan.
“On the morning of that day, I had no inkling that by late afternoon, I will be leaving,” Ghani recounted during the interview with former UK Chief of Defense Staff General Nick Carter, broadcast on Thursday. Carter was guest-editing that edition of the BBC radio program.
According to Ghani, the Afghan authorities were initially informed that the Taliban fighters would not be entering Kabul, but “two hours later, this was not the case.”
He was recounting the chaotic August weekend in which Taliban seized control of the country’s capital at lightning speed. Analysts had predicted Kabul would not be breached for weeks or months despite the militants’ advances elsewhere in Afghanistan, but they ultimately took power in a matter of hours.
Later that month, a former senior official of Ghani detailed a vivid picture of the last weeks of his government, including how the former President and his advisers were stunned by the speed of the Taliban’s advance. Ghani was far from prepared for the Taliban’s arrival on the outskirts of Kabul and fled with only the clothes he was wearing, the former official told CNN. 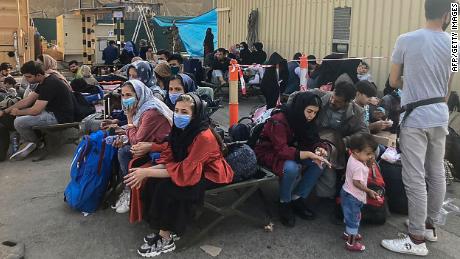 Ghani told the BBC that he told several colleagues and his wife to flee the city while he waited for a car to take him to the Ministry of Defense. After the vehicle failed to appear, National Security Adviser Hamdullah Mohib and the head of the Afghan President Protective Service (PPS) came to find him.
“They said PPS has collapsed. If I take a stand, they will all be killed, and they will not be capable of defending me,” he told the BBC.
Mohib, who was “literally terrified,” did not give him “more than two minutes” to prepare to leave, Ghani said. Their initial plan to travel to Khost had fallen through after the city was taken, meaning Ghani did not know where they were headed when departing.
“Only when we took off did it become clear that we were leaving,” he said.
Ghani, who has been residing in the United Arab Emirates, refuted allegations that he brought money with him overseas, saying he wanted to “categorically state” that he “did not take any money out of the country.”
He added that the “helicopters in our first destination were available for everybody to search,” welcoming the prospect of an inquiry by US Inspector General for Afghanistan Reconstruction John Sopko.
“I’d like an inquiry and as I suggested earlier, as soon as these allegations were raised by the United Nations, or an investigative firm, my style of life is known to everyone. What would I do with money? This is an accusation, particularly coming in the first part from Russia.”
The former President partially attributed the country’s downfall to his decision to trust “in our international partnership.”
“All of us made a huge mistake in assuming that the patience of the international community would last,” Ghani remarked.
Although Afghans “rightly blame” him for the fall of their country, Ghani maintained that he has been “made a scapegoat” and had his life work “destroyed.” All parties need to “arrive at a pathway for true national reconciliation in autonomy and accountability to each other,” he concluded.