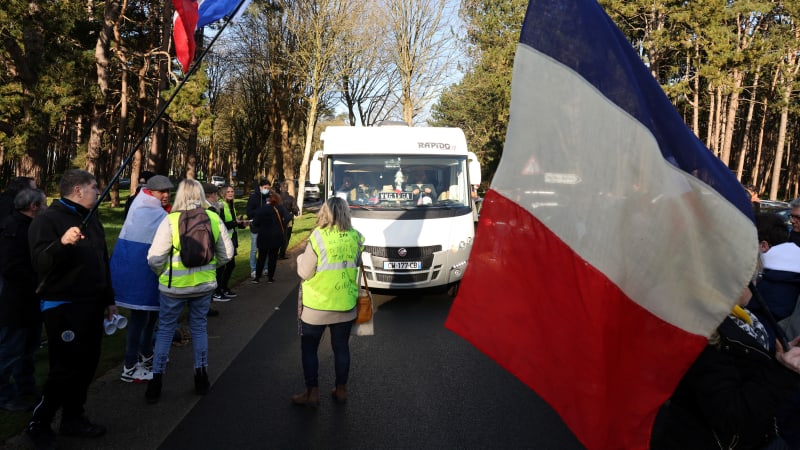 PARIS — France will deploy thousands of police in and around Paris on Friday and over the weekend and set up checkpoints at toll stations on major roads leading into the capital to keep “Freedom Convoy” motorists out, the city’s police force said.

Despite an order not to enter Paris, motorists protesting against COVID-19 restrictions are converging on the French capitals from multiple cities across France, inspired by the horn-blaring demonstrations taking place in Canada.

The French “Freedom Convoy” protests, however, show signs of uniting a disparate group against President Emmanuel Macron two months out from April’s presidential election, with remnants of the 2018/2019 anti-government “Yellow Vest” movement and some far-right politicians rallying behind the motorists.

“We’ve been going around in circles for three years. We saw the Canadians and said to ourselves, ‘It’s awesome, what they’re doing.’ In eight days, boom, something was sparked,” said pensioner Jean-Marie Azais, headed to Paris from the southwest.

The motorists’ protest follows waves of demonstrations over France’s vaccine pass rules — which require people to show proof of inoculation against COVID to enter bars, restaurants, cinemas and other public spaces.

Whereas in Canada the protests have united truckers angered by a vaccine mandate for crossing borders, in France it is everyday folk angry over COVID restrictions who are taking to their vehicles.

In Toulouse, a convoy of vans, motorhomes and cars departed from a parking lot on Thursday, waved off by a crowd wearing the high-visibility vests that defined the “yellow vest” demonstrations.

The different convoys are expected to arrive outside Paris later on Friday. Their numbers are unclear. In the central city of Le Mans, one meeting point was deserted on Friday.

The police deployment will include rapid-response officers on motorcycles and heavy-lifting equipment to dismantle any makeshift roadblocks put up by the protesters.

Some supporters of the “Freedom Convoys” said the protesters should not be deterred by the police order to stay remain outside Paris city limits.

“The authorities cannot block everyone,” said one woman cheering on the motorists in Toulouse. “The convoys must force it, they must still try to enter.”

The “Yellow Vest” revolt shook Macron’s presidency over several months and revealed a deep-seated anger felt outside big cities at the high cost of living and an urban elite perceived as disconnected from the daily hardships of regular folk.