Home Technology Google Wants to Write Your Emails for You; It's Time to Draw the Line 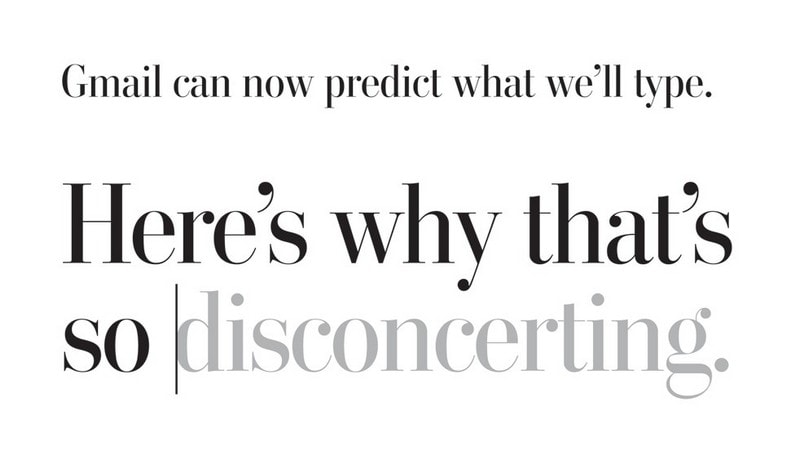 I’ve been doing battle with Gmail. Every day my emails try to write themselves, and every day I try to prove I’m more clever than an algorithm.

Take Sunday, for example. I was responding to a Craigslist ad about a coffee table, and I started to ask, “Is the table still avai …” and Gmail’s new “Smart Compose” feature finished my sentence, with an apparition-like “available” and what felt like a self-satisfied smirk.

So instead I deleted the whole line and came up with: Is that item of yours still itching for a new home? And then I hit send with a little extra swagger. Google doesn’t know me at all.

And yet, with its ever-increasing cache of data about human behaviour, it does know me – it knows everyone.

Google wants to save me time, which I appreciate, in theory – it knows when “th” means “thanks” and can quite ably predict how “Let’s meet Satur” should end. When Gmail tries to pen entire responses with its exclamation point-heavy “Smart Reply” suggestions (“It was great seeing you too”; “Oh no! Feel better”; “Yum!”), that’s one less thing to worry about. But what kind of trade-off am I making?

Communication has already become less personal. We email and we text, even while we’re sitting down to a meal in front of a real, live human being with a mouth that can speak. Meanwhile, talking on the phone is becoming the conversational version of a four-way stop – an awkward, halting affair, as people seem somehow out of practice. Technology has encouraged us to converse in short little reactive bursts, and while outsourcing that mindless work to one of the world’s most powerful companies seems like an obvious next step, it also feels like a part of my brain doesn’t matter anymore.

Technology has already rendered obsolete my ability to memorise phone numbers and my knowledge of directions; it can even take my driver’s license for all I care – bring on the self-driving cars. But it can’t have my words.

The word communication comes from the same root as commune, communal, common, community. Words are supposed to bring us together and bridge our divides, which – maybe you’ve noticed? – are deeper than ever. So it’s logical that, when we become estranged from our words, we also become estranged from each other. It’s hard to imagine that will improve if our interactions are based on an algorithm-generated set of Mad Libs.

Gmail’s new bells and whistles feel like a continuation of the Facebook extension you can add that automatically sends well-wishes to every friend on their birthday. As if it wasn’t easy enough to post a quick note on someone’s wall after being instantly reminded of their special day, this extension lets users seem thoughtful without the imposition of actually thinking. It’s never been easier to seem like you care.

Being mindless is becoming the default. Texts and emails are a snap to send, so we send them constantly while thinking less about what we’re actually saying. I’m as guilty as anyone. I love a dancing lady emoji and a crying Michael Jordan gif as much as the next person, but when I think about how quickly these shortcuts have become ubiquitous, I’m speechless (even if Google might have a suggestion for me).

Before I was a journalist, I studied poetry writing, and, for me, word economy was everything. We don’t all have the capacity to sustain “The Love Song of J. Alfred Prufrock,” and besides, I like verse that cuts like shards – making readers weep (or at least wince) as efficiently as possible. I used to agonize over every syllable, squinting at my computer screen like I was solving a jigsaw puzzle, labouring to turn three words into one. Now, as the editor of Book World, I spend my days reading words written about other words, and a reviewer’s frequent criticism is that some poor scribe couldn’t transform language into emotions. The best writers can elicit a sob or a burst of laughter with one brilliant sentence.

This is why I feel especially sensitive to Gmail’s “innovation.” The technology is a stark reminder that our exchanges have devolved into something so meaningless, a robot could do them. The era of bound letter collections is over – when you had to prepare the ink, sharpen the quill and break out the sealing wax, what you said had better be important. My sympathies are with future historians who have their work cut out for them sifting through an endless digital archives of “sounds good”s and “lol”s looking for something – anything – of importance. Taking a few moments to mull an email to a stranger about a coffee table isn’t going to reverse the slide, of course, but it feels like a step in the right direction towards more mindful communication.

It is, after all, a tricky time to be relieved of the need to think about our words, what with outlandish conspiracies ricocheting around the internet and a president who fibs more than a kindergartner.

In the end, I decided to call it quits on my power struggle with Gmail. I’m turning off the “Smart Compose” feature, and not just because I feel like it’s making me dumber. Instead of wasting time trying to outwit a computer program, I’m going to use my precious moments to put some thought into what I write. I won’t give up my emoji habit entirely – a well-placed pig snout speaks volumes. But words deserve careful consideration even if they don’t demand it – and people do too.

OnePlus Nord Watch is confirmed to launch in India soon. Ahead of the official announcement,…