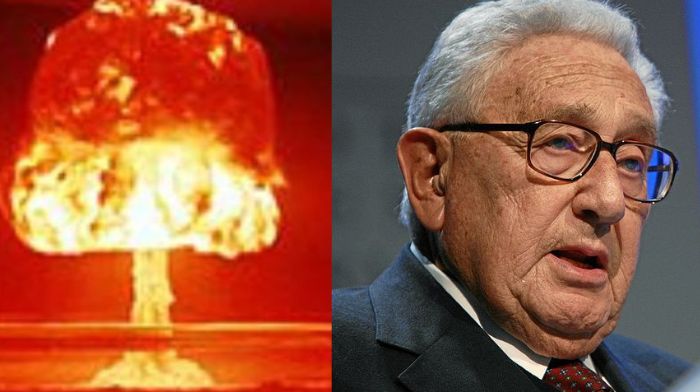 We may be teetering on the brink of mutual destruction rather than the balance maintained for decades known as mutual deterrence. You don’t have to take my word for it; the United Nations, scientists, and the ever-lasting Henry Kissinger think so, too.

Between Russian President Vladimir Putin’s passive-aggressive nuclear threats, China’s increased military exercises, the Middle East starting to look more and more like it did over 20 years ago, and North Korean nuclear tests, it might be time for us to start seriously investing in some fallout shelters.

So what are these warnings of doom and gloom, and should we pay attention? Let’s take a closer look.

Hand-Wringing At The United Nations

Members of the United Nations met recently to discuss the renewal and any adjustments to the Nuclear Non-Proliferation Treaty (NPT). But unfortunately, the tone of the meeting was tense and pretty dour.

“The prospect of nuclear conflict, once unthinkable, is now back within the realm of possibility.”

At this same meeting, Secretary of State Antony Blinken supported this warning by listing various nuclear threats around the world, including:

What nuclear war looks like from space based on data from peer-reviewed science papers. A Nature Food paper today suggests that over 98% would starve to death in the US, Europe, China & Russia. pic.twitter.com/J0dtegXen4

So if the worst were to happen and nuclear war were to break out, just how bad could it be? Bad enough to redefine ‘climate crisis,’ that’s for sure.

You’re Better Off At Ground Zero

Scientists at Rutgers University have run scenarios on what the fallout could be if there is a nuclear altercation on this beautiful blue marble of ours. The scenario they used as their primary example would be what would be considered a relatively small-scale nuclear engagement (comparatively) between India and Pakistan.

Their scientific models theorize that if a nuclear war were to take place between India and Pakistan, the results would be:

To put the above into perspective, that’s a war involving less than 3% of the world’s stockpiles of nuclear weapons. When this model is expanded for a war between the United States and Russia, upwards of five billion would die worldwide.

To put that even more into perspective that would be 62% of the world’s population would die due to a nuclear exchange between us and Russia. Time to start boning up on old episodes of “Doomsday Preppers” if you ask me.

Warnings From The Time Of Nixon

Former National Security Advisor and Secretary of State to President Richard Nixon Henry Kissinger still has some advice in him even at the age of 99. In a recent interview with the Wall Street Journal, Mr. Kissinger tried to impart some wisdom to the current world leaders.

“We are at the edge of war with Russia and China on issues which we partly created, without any concept of how this is going to end or what it’s supposed to lead to.”

I think that’s an interesting statement. Essentially what Mr. Kissinger quite rightly states is that we have no real mission or vision behind our foreign policy. He goes on to illustrate, “I think that the current period has a great trouble defining a direction” and continues to state that U.S. diplomacy is “very responsive to the emotion of the moment.”

When asked how the U.S. should be managing foreign policy and diplomacy, he provides a frustrating realistic answer saying we must learn:

“…how to marry our military capacity to our strategic purposes, and how to relate those to our moral purposes – it’s an unsolved problem.”

He couldn’t be more correct. But, unfortunately, I don’t think we’ve done the above well except maybe in the example of the World Wars.

Time Is Ticking, And Lady Luck Is Leaving

Mr. Kissinger has warned us before of impending doom. Of the increasing adversarial relations between us and China he has said we are at risk of a global “catastrophe comparable to WWI.”

So what should and can we do to try to avoid this apparent spiral into inevitable annihilation? The author of the Rutgers study and climate scientist Alan Robock believes:

“In my opinion, our work is an existential threat to nuclear weapons – it shows you can’t use nuclear weapons. If you use them, you’re like a suicide bomber. You’re trying to attack somebody else, but you’ll die of starvation.”

While the science might be there to back his claim, I fear Mr. Robock gives our world leaders far too much credit. The rub with suicide bombers is they don’t care that they will die. The result of the enemy dying is victory, and to ‘sacrifice’ yourself for the goal is a noble cause.

A tactic once thought of only used by extreme terrorists, the idea that countries that have been left unchecked would view this sort of tactic the same doesn’t seem that far-fetched. As UN Secretary-General Guterres says:

“Humanity is just one misunderstanding, one miscalculation away from nuclear annihilation.”

Will we see nuclear drills with children hiding under their desks in the near future? Should I start learning how to can my own food and invest in an underground shelter in the middle of nowhere?

Former President of International Physicians for the Prevention of Nuclear War Ira Helfand probably thinks that’s not a bad idea. His ominous warning is enough to send chills down your spine:

“Sooner or later our luck is going to run out.”

It’s been 77 years since a mushroom cloud swelled above Nagasaki.

Once again, humanity is playing with a loaded gun.

Eliminating nuclear weapons is the only guarantee they will never be used again.