IND U19 vs SA U19 Live: India will face off against South Africa in their opening match of the U-19 World Cup 2022. The Boys in Blue, led by captain Yash Dhull, are the most successful team in the competition and will hope to carry that legacy when they step onto the pitch at Providence Stadium in Guyana. Incidentally, the two teams had clashed in 2008 final, with Virat Kohli’s team winning the trophy in Malaysia. Follow InsideSport.in for all India vs South Africa LIVE, U-19 World Cup LIVE Updates.

The SA under-19 team travelled to the West Indies for a four-match Youth One-Day International series in testing conditions in the Caribbean. They then played two warm-up games, including an inter-squad game after their first match against Australia was postponed, before another contest against the West Indies to end what have been demanding preparations for the players.

Also Read: U-19 World Cup Live: From Harnoor Singh to Qasim Akram and Cooper Connolly, top players to watch out for in U-19 WC 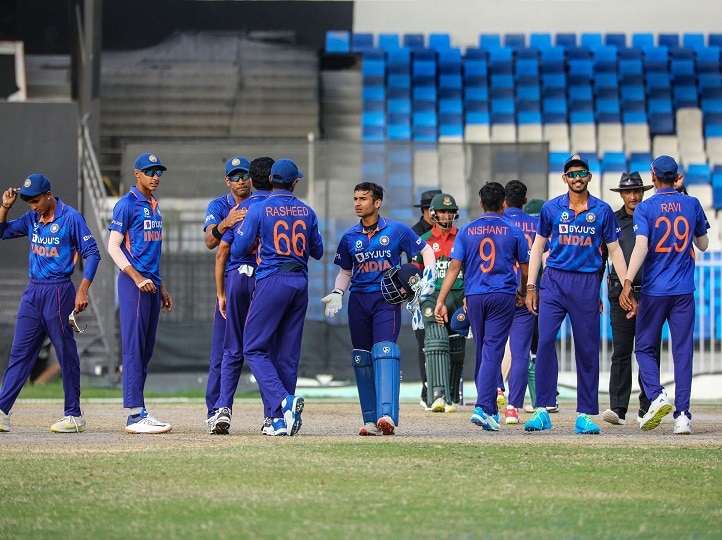 Looking ahead to Saturday’s opener, head coach, Shukri Conrad says the team is in high spirits and although they are wary of their first opponents – who finished as runners-up in 2020 and won the 2018 edition – he is adamant the team are just as capable as India and his side will not go in as underdogs.

India themselves had very good preparations ahead of the U19 World Cup. Yash Dhull and Co won both of their warm-up fixtures, beating West Indies comprehensively in their first game before a win over arch-rivals Australia.

With no players playing from the previous editions the onus will be on Yash Dhull and head coach HrishikeshKanitkar to guide the team throw and continue to build India’s unmatched legacy. India’s maiden U-19 World Cup win came in 2000 and since then, they have won three more, in 2008, 2012 and 2018. Priyam Garg and Co. came close to winning it again last year, but fell at the final hurdle to Bangladesh.

The South Africa under-19s are ready to begin ICC U19 Men’s Cricket World Cup West Indies 2022 campaign, when they take on India on Saturday.

IND U19 vs SA U19 pitch and weather report

The surface at the Providence Stadium is good for batting and one can expect scores well above the 250 region. Indian captain Yash Dhull said in his presser that he expects the pitch to be slow, but the batters should still have a sizeable advantage.

Star Sports Network are the official broadcasters of the U19 World Cup in India. The IND U19 vs SA u19 live telecast will be available starting at 7:30 AM IST on Saturday, 15th January. The live stream of the same can be viewed on Disney+Hotstar. One can also follow all LIVE updates on Insidesport.in.

Alienware Graphics Amplifier, an external GPU (eGPU) solution from Dell, is said to have been…