IND vs SA LIVE score – Johannesburg 2nd Test LIVE: With 8 wickets needed on Day 4 and India’s pace battery in red hot form, all possibilities indicated at a historic win in Johannesburg. But rain played spoilsport, washing out first session. The hosts need 122 but a start is difficult due to persistent rain in Johannesburg. Follow India vs South Africa LIVE Updates at Insidesport.in

Indian pace-battery in last 24 months have outperformed every opposition – but on Thursday they will have to give their biggest test. The hosts are in control having gone into Stumps on Day 3 with the score reading 118/2, needing 122 more to win. Can Jasprit Bumrah, Mohammed Shami, Shardul Thakur & company deliver 8 Wickets for India? Only rain stands in their way on Day 4.

Also Read: IND vs SA live: Form is temporary but class is permanent and it’s true for Rahane and myself, says Pujara

15:30: Lunch: So, first session is officially over and hopefully, the weather will clear up in 40 minutes for a start.

@15:07: Half an hour to go for lunch and any play is unlikely till then. It’s still drizzling.

@14:20: Pitch curator, reserve umpire and the on-field umpires inspected the outfield but as it’s still drizzling, any plan unlikely before 2nd session. 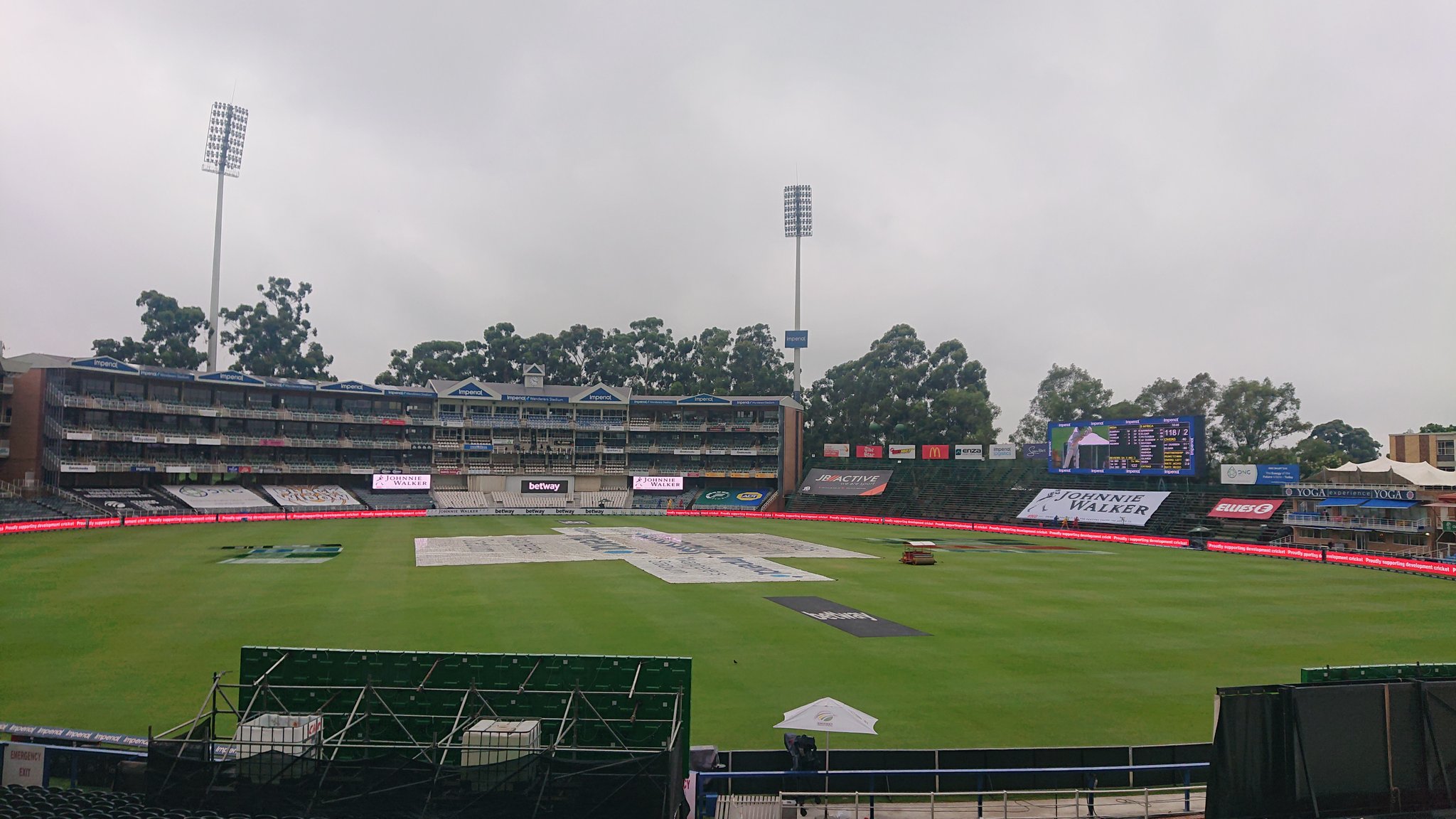 @14:10: An hour since the last update and the conditions haven’t improved. It’s still raining in Jo’burg.

@13:06: The Wanderers under a cloud cover at the moment. It is drizzling!

The Wanderers under a cloud cover at the moment ☁️

It is drizzling 🌧️ here on Day 4⃣

We will be back with LIVE updates #SAvIND pic.twitter.com/62pKNpaLJ5

@12:55 PM: No change in condition. Team India wait eagerly for the drizzles to stop.

@12:35 PM: An hour left to play and the covers have come back on at Wanderers. Timely start looks difficult. 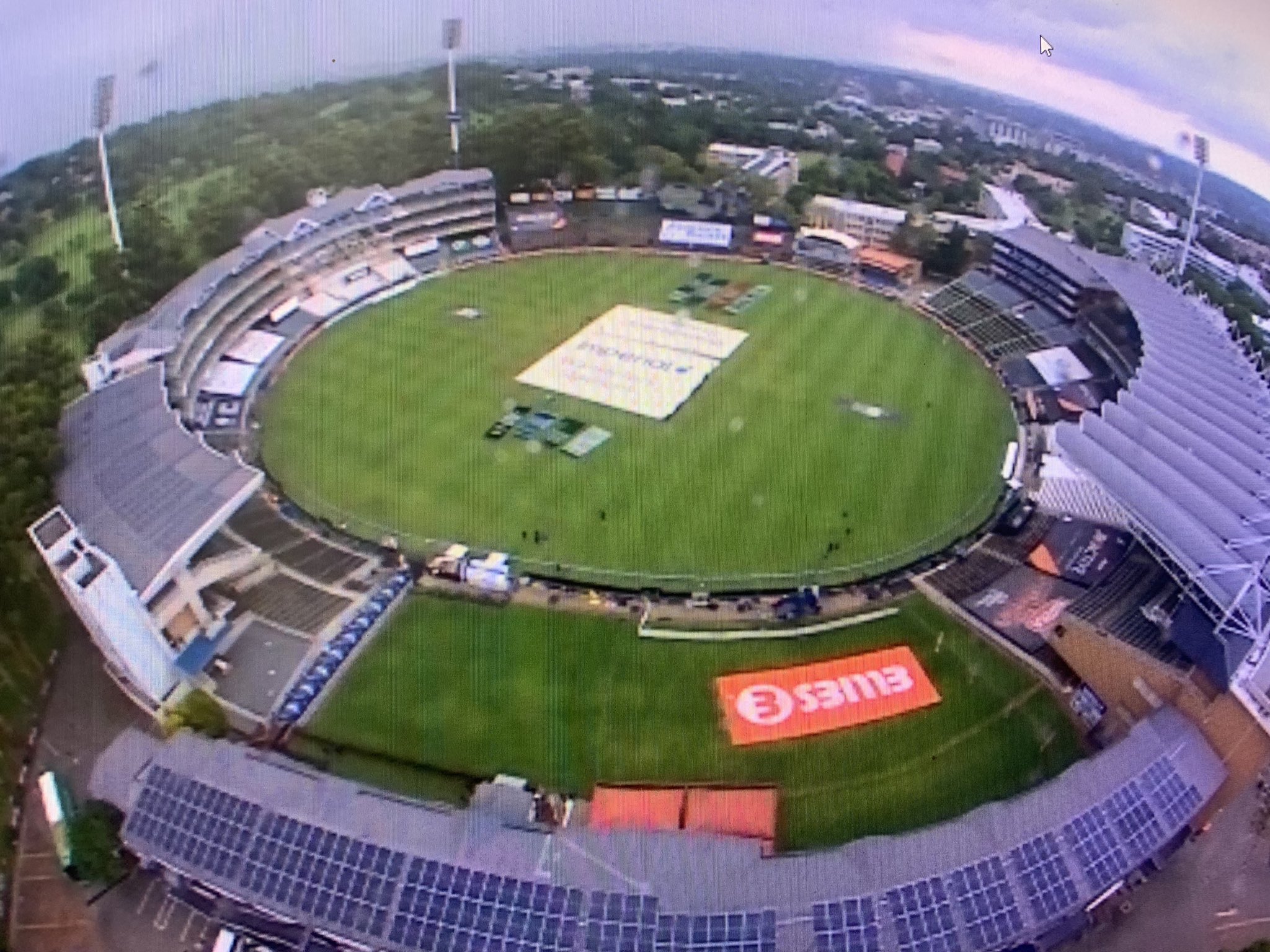 @12:19 IST: It was drizzling in Johannesburg and the covers were on. It’s being removed now.

@12:13 IST: Will rain play spoilsport to a 4-day end to the Test? Rain clouds are hovering over Wanderers.

8AM weather https://t.co/GomQpTogSn rain threat as it looks but no signs of sun as such and it looks a bit cloudy. pic.twitter.com/gimpekeN2g

12 PM IST: Can India finally breach SA today after dominating Australia and England in their backyard? Will R Ashwin come into play as cracks are likely to open at the Wanderers pitch? Remember, India has never lost at Johannesburg.

11:40 AM IST: All eyes will be on Mohd Shami & Jasprit Bumrah while Shardul Thakur will look to replicate his 1st innings heroics.

Johannesburg 2nd Test LIVE: South African batters, led by their gutsy skipper Dean Elgar, dug their heels in to reach within 122 runs of a series-levelling victory against a determined India as the second Test seemed poised for a gripping fourth day finish on Wednesday.

Dean Elgar (46 batting off 121 balls) took some nasty blows off deliveries that spat off the cracks but kept his team on course at 118 for 2 in pursuit of a tricky 240-run target.

Going into Day 4 – Cheteshwar Pujara feels Elgar’s wicket will be the key.

“The way he bats, it looks like there will be a catch coming into the slips,” Pujara said. “Every time he makes a lot of runs and gives his team a good start. Hopefully, he will get out quickly. He has a different technique and temperament and it looks weird sometimes but he makes runs and we have to get him out quickly. His wicket is key”

That’s Stumps on Day 3 of the second #SAvIND Test!

We will see you tomorrow for Day 4 action.

Earlier on the Day 3, India sent Aiden Markram & Keegan Petersen back to pavilion.

Shardul Thakur (1/24), who is in the middle of a great Test match, got his eighth victim of the game in an over during which the ball seamed, bounced and kept low from the same spot with the last one finding opener Aiden Markram’s (31) pads.

Keegan Petersen (28) added 46 with his skipper before Ravichandran Ashwin (1/14) got one to drift and turn getting a leg before decision going his way.

Pujara (53 off 86 balls) and Rahane (58 off 78 balls) gave fresh lease of life to their respective careers with timely knocks while Hanuma Vihari (40 not out) also played a crucial part in swelling India’s overall lead as they finished their second innings at 266. Kagiso Rabada (20-3-77-3) was inspirational in the final half-an-hour before lunch as he brought his team back with quick dismissals.

Pujara and Rahane, in a rarely seen counter-attacking mode, added 111 runs in just 23.2 overs, getting some breathing space for themselves. Having understood that time is indeed running out for them, both the batters decided not to try and hang around as they looked for scoring opportunities.

They hit 18 fours and a six between them. There was a time when India were 155 for two with a lead of 128 and it seemed that South Africa’s propensity to bowl too short or too full was proving to be damaging. But then Rabada, South Africa’s best exponent of fast bowling since Dale Steyn, produced an inspired show that is so synonymous with the traditional format.

However, the man who disappointed one and all was Pant, who first got a snorter from Rabada that hit his helmet visor when he tried to defend awkwardly, and then he charged to convert a short ball into a half volley. The result was an edge to keeper. It was Vihari and Shardul, who were involved in a 41-run stand for the seventh wicket and then had two little but enormously important stands of 17 and 21 respectively with tailenders Jasprit Bumrah and Mohammed Siraj to set up a good chase for the Proteas.

Cincinnati Masters LIVE: All eyes will be on Serena Williams in what could be her…