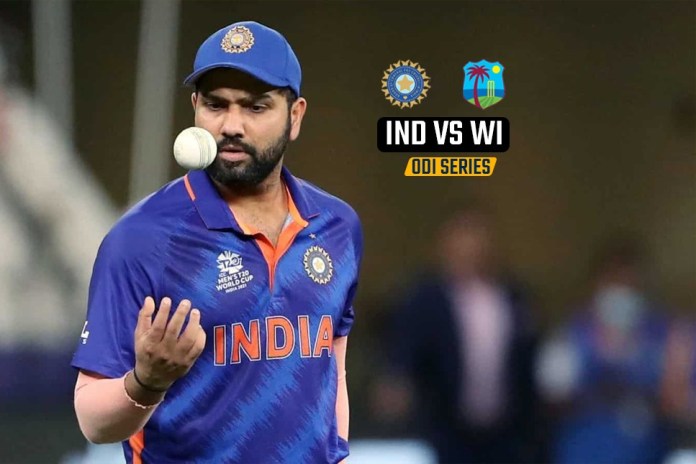 IND Vs WI LIVE score, 3rd ODI: Clean sweep on Rohit Sharma’s mind- India white-ball captain will look to send a strong message by winning the debut series as full-time captain 3-0. Hosts India head into the final match of the series after having ticked almost all the boxes in the first two games, which they won comfortably. Follow India vs West Indies LIVE score updates on InsideSport.IN

IND vs WI LIVE score, 3rd ODI: Shikhar Dhawan’s return huge boost- The return of Shikhar Dhawan as a big boost to Team India for 3rd ODI. He is expected to add firepower to the Rohit Sharma-led side as Men in Blue eye 3-0 whitewash.

After his side’s 44-run win in the second game on Wednesday, India skipper Rohit Sharma made it clear that Dhawan will be back for the last match of the ODI series.

“We will get Shikhar back for next game, and he needs some game time. It is not always the results. We wanted to try it one game,” Rohit had said.

This means that vice-captain KL Rahul would continue to bat in the middle-order along with former skipper Virat Kohli, whose search for his 71st international hundred continues.

The hosts, who were restricted to 237 for nine in the second game, would be keen to post a big score if they again bat first.

Skipper Rohit failed in the last game but it is common knowledge that he can take on any attack on his day, and so is the case with Dhawan.

IND vs WI LIVE: Sunil Gavaskar unhappy with Rishabh Pant’s move as opener, says, ‘He should be the finisher’- check out

IND Vs WI LIVE, 3rd ODI: Pant will go back to the middle-order alongside Suryakumar Yadav, who is likely to retain his place after emerging as the team’s highest scorer in the second match following a top-order collapse.

In all probability, all-rounder Deepak Hooda would have to make way for Dhawan in the playing XI.

All the middle-order batters — be it Pant, Suryakumar, Kohli or KL — would be keen to get some more runs under their belt and end the ODI leg on a high.

It remains to be seen whether Shreyas Iyer, if available for selection, can make the playing XI or not.

IND Vs WI LIVE, 3rd ODI: Bench strength likely to be tested- The Indian bowlers dished out a clinical show in the two preceding matches, dismissing their opponents for 176 and 193, respectively.

And with the series sealed, the Indian team management can afford to make few changes and give opportunities to new players.

From his dreams and motivation to receiving #TeamIndia cap from @imVkohli! 🧢 👍@HoodaOnFire shares it all in this… https://t.co/jDAx8bK3KO

So, either left-arm orthodox spinner Kuldeep Yadav, who is making a comeback after recovering from an injury, or young leg-spinner Ravi Bishnoi could get a look-in.

Meanwhile, the West Indies, who have already conceded the series, would be looking to put up an improvised show with the bat and regain some lost ground.

IND vs WI LIVE: Shaun Pollock worried about India’s middle-order, says, ‘All are going to bat at No.3 in IPL 2022’- check out

For more sports news and India vs West Indies LIVE score updates, follow us at InsideSport.IN