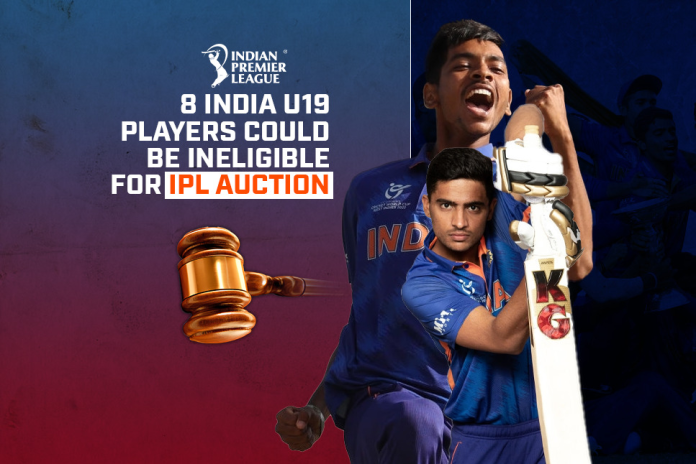 IPL 2022 Auction Shocker – U19 WC Stars INELIGIBLE? The IPL dreams of 8 U19 World Cup winning stars are likely to get shattered. As per the BCCI norms Shaikh Rasheed, Dinesh Bana, Ravi Kumar including 8 young guns are ‘NOT-ELIGIBLE‘ for IPL Auction in Bengaluru. The youngsters have now pleaded with BCCI to consider them for the auction: Follow IPL 2022 LIVE Updates & IPL Auction LIVE Updates with InsideSport.IN

According to a report by The Indian Express, if the current eligibility rules of BCCI are applied then 8 world cup squad members will not be eligible for auctions.

U19 WC Stars INELIGIBLE? This list features the likes of Haryana’s Dinesh Bana, the wicketkeeper-batter who has recently become a sensation, and Andhra’s Shaikh Rasheed, who played a match-winning knock in the final. Besides them, Angkrish Raghuvanshi, Manav Parakh, Nishant Sindhu, Grav Sangwan, Ravi Kumar and Siddarth Yadav also are among those not fulfilling the IPL auction criteria.

Why these youngesters are not fulfilling ELIGIBILITY CRITERIA? According to the rules of the competition, a UNCAPPED player will be eligible for auction only if he fulfils any of the two criteria –

The 8 mentioned U19 cricketers doesn’t fulfil this criteria.

COVID-19 pandemic forced the domestic Under-19 competitions to run simultaneously with the senior-level competitions, which prevented many of India’s U19 stars to feature in their state’s senior team.

However, many have appealed to the BCCI to amend their rule in order to accommodate these eight players in the auction pool, given their recent exploits.

“I feel the BCCI should consider this as a special case and the players should not lose out because of this. The team has done really well and they should not be deprived of the opportunity,” BCCI administrator Ratnakar Shetty said, as quoted by The Indian Express.

If the Board of Control for Cricket in India (BCCI) does not amend this rule for the IPL 2022 auction, a total of eight members of Yash Dhull’s team will be ineligible to go under the hammer on 12th and 13th February.

IPL 2022 Auction: India U19 stars Dinesh Bana, Ravi Kumar might not be in auction pool; rule could make eight players ineligible for IPL

U19 WC Stars INELIGIBLE? The India U19 team recently lifted the 2022 ICC Under-19 Cricket World Cup by beating England U19 team by four wickets in the final.

Following a fantastic campaign, the young and promising talents of Yash Dhull’s team were all likely to bag IPL contracts. Their hopes of bagging IPL Contracts now are dependent on how BCCI decides to react on their plea? Follow LIVE Updates

IND vs ENG Weather Report: ‘Not too good’ forecast for Day 1 of the Edgbaston Test, RAIN likely to play SPOILSPORT: Follow IND vs ENG LIVE

IND vs ENG Weather Report: ‘Not too good’ forecast for Day 1 of the Edgbaston Test, RAIN likely to play SPOILSPORT: Follow IND vs ENG LIVE