IPL Auction 2022 LIVE – 10 Big Things to WATCH OUT FOR: The much awaited IPL Auction starts at 12. 10 IPL franchises today are ready to shower 561.5 Cr in auction over next two days. Be it IPL Auction Purse, IPL Auction Rules, Total No. of players, Sequence of players in auction or BROADCAST & LIVE streaming of IPL Auction – Check TOP 10 things to watch out for today in IPL Auction: Follow IPL 2022 live updates & IPL Auction LIVE Updates on InsideSport.IN

Question 1: When and where is the IPL 2022 auction?
Contrary to various reports doing the rounds, IPL Auction on Satuday & Sunday will start at sharp 12PM. The IPL Franchises will assemble in the auction hall by 11:00PM. This is the 5th MEGA IPL AUCTION in 15 Years.

The auction will take place in Hotel ITC Gardenia in Bengaluru.

Question 2: Where the auction will be broadcasted LIVE?

The auction will be broadcasted LIVE on the Star Sports network in India. The official broadcaster will broadcast the auction LIVE on 8 Network Channels & 5 Languages.

Question 3: How many players are already retained by the 10 IPL Franchises and how many slots are now available?

A total of 33 players are already retained by 10 IPL Teams. This means 217 Slots are available at the IPL Auction.

Of the 33 retained players, 10 are overseas and 5 are uncapped Indians. 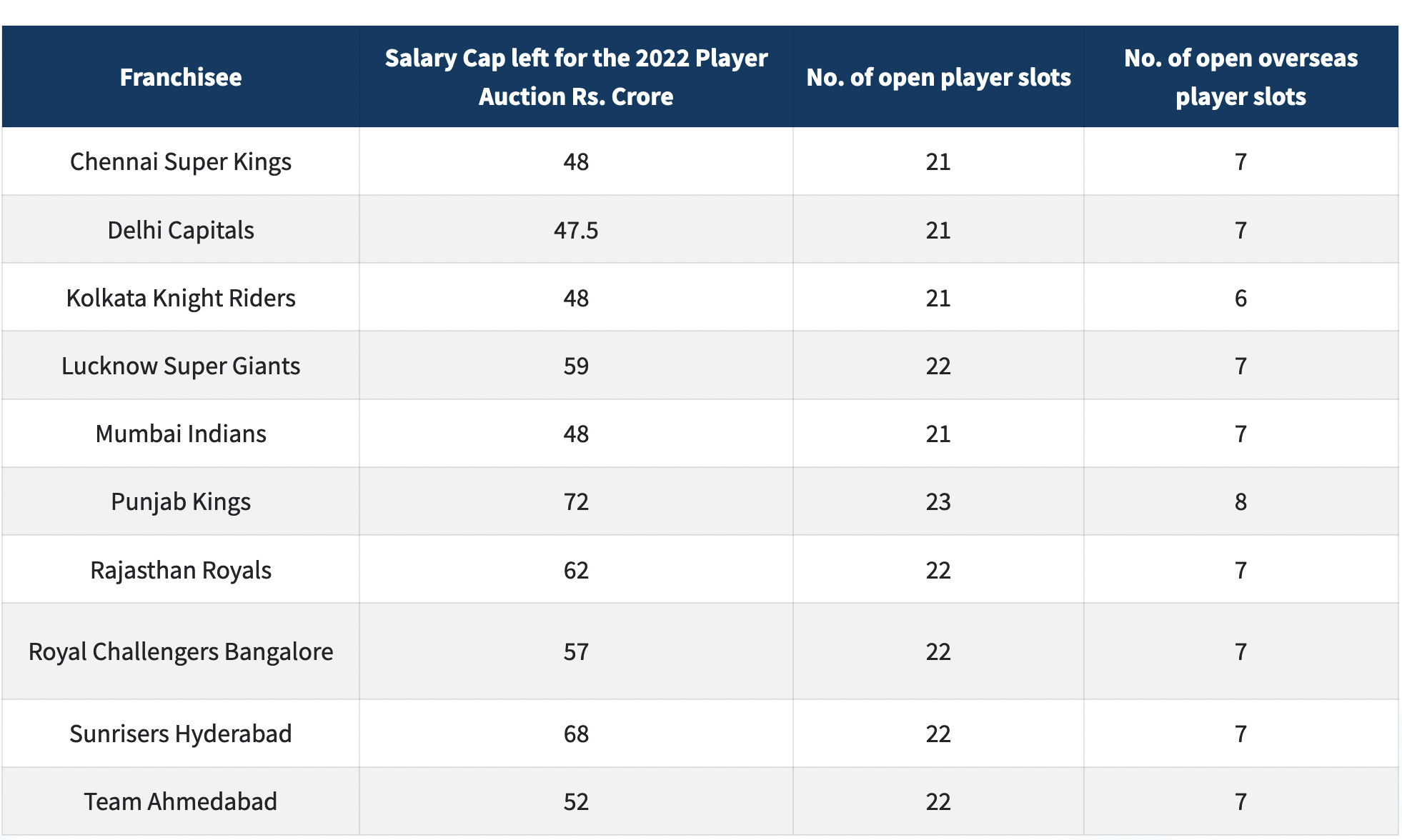 Question 4: How many players will be available at the auction?

BCCI initially had declared that 590 players (370 Indian and 220 foreign) will be up for grabs. This shortlist was pruned from the original list of 1214 players based on the wishlist sent by the ten franchises.

But InsideSport has now learnt that on the request of IPL Teams, BCCI has added another 10 players in the list. The details of the same are still awaited from the BCCI.

Question 5: What are the minimum and maximum players each team needs to have in their squad?

Each team should have a minimum of 18 players and a maximum of 25 players in their squad.

Each squad can have at the most eight overseas players in their line-up.

Question 6: What is the auction purse for each team? Is there a limit on salary of 1 single player?

No, there is no upper limit to how much a franchise can bid for 1 single player. But under no condition player purse for buying total squad can exceed 90 Cr threshold.

Punjab Kings will enter auction with highest player purse of 72 Cr. Delhi Capitals will have lowest amount of monies to spend at the auction @ 47.5 Cr.

Question 7: What is the lowest and highest base price?

As per the BCCI’s released list, the ten marquee players are all marked for INR 2 crore.

Question 8: In what sequence players will be auctioned? What will be the auction process?

Question 9: How many players will be part of the bidding on the first day?

Only the first 161 players will be up for bidding on Saturday. The second day will start with an accelerated bidding process.

Question 10: What is the accelerated process?

The accelerated process will only come into play on DAY 2 of auction i.e SUNDAY.

At the end of first day of the auction, the franchises will be asked to nominate, from the remaining pool, the players they are interested in.

Those players will go under the hammer on Sunday. This process could be repeated again if any franchise wants to further nominate unpresented/unsold until then.

IND-L vs SL-L Live Streaming: When & How to watch RSWS 2022 FINAL, India Legends vs Sri Lanka Legends LIVE: Check out

IND-L vs SL-L Live Streaming: When & How to watch RSWS 2022 FINAL, India Legends vs Sri Lanka Legends LIVE: Check out

IND-W vs SL-W LIVE Score: India-Women vs SriLanka-Women LIVE: On the back of a historic cleansweep…