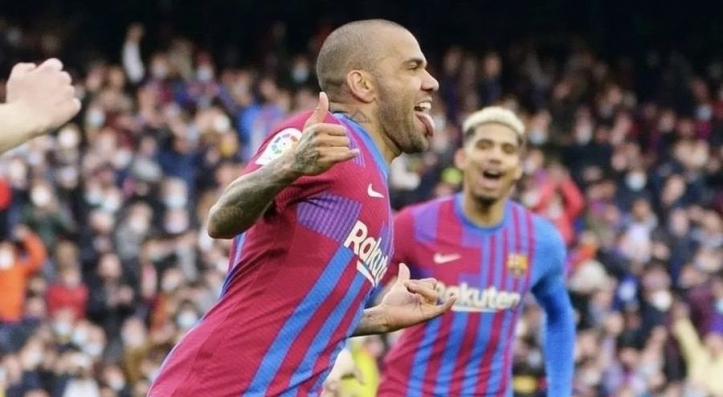 Barcelona‘s January signings shone on Sunday in a 4-2 victory over Atletico Madrid that could prove pivotal in the top-four race.

Adama Traore and Pierre-Emerick Aubameyang both made their Barca debuts, while Ferran Torres and Dani Alves played their first home games since also moving to Catalunya in January.

Atletico took an early lead through Yannick Carrasco but Barca played their best half of the season as they hit back with three goals before the break.

Dani Alves then rolled back the years to rifle in a fourth, meaning Luis Suarez’s strike was nothing more than a consolation.

The Brazilian was later sent off for kicking Carrasco but the result means that Barcelona move above Atletico Madrid and into fourth place.

They are also closing in on the teams above them as second-placed Sevilla could only manage a 0-0 draw at Osasuna on Saturday, with Ivan Rakitic missing a late penalty and Anthony Martial playing poorly on his debut after arriving on loan from Manchester United.

Third-placed Real Betis also suffered a disappointing result as they lost 2-0 at home to Villarreal, with Paui Torres heading home the opener and Etienne Capoue adding a second.

Real Sociedad‘s top-four hopes also took a hit as they drew 0-0 at Valencia, while Rayo Vallecano are also falling away from the Champions League places as they lost 2-0 at Celta Vigo.

At the top of the table, Real Madrid defeated Granada 1-0 on Sunday evening thanks to a 74th minute goal from Marco Asensio.

That result means that Real Madrid open up a six-point lead over Sevilla and look strong to win the title.