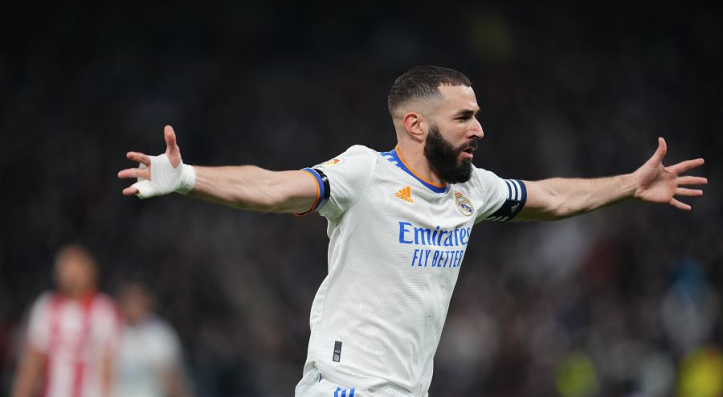 Real Madrid end 2021 in a commanding position at the top of La Liga after beating Athletic Bilbao at San Mames on Wednesday.

Karim Benzema gave Madrid the dream start by scoring twice within the first seven minutes in the Basque Country.

Oihan Sancet quickly halved the deficit on 10 minutes but that is how the match finished.

Real Madrid‘s win means they are eight points clear at the top of La Liga, with Sevilla adrift in second.

In the other game of the night, Atletico Madrid‘s crisis continued as they suffered their fourth successive La Liga defeat.

Joao Felix fired Atletico into a second-minute lead at Granada but the home side bounced back to win 2-1 thanks to goals from Darwin Machis and Jorge Molina.

That result means that Atletico remain in fifth going into the new year, with their chances of retaining their La Liga title all but over already.

Sevilla had failed to take advantage of Real Madrid’s draw with Cadiz at the weekend by drawing 1-1 with Barcelona on Tuesday night.

Julen Lopetegui’s side could have temporarily moved to within three points of Los Blancos with a win, but Papu Gomez’s opening goal was cancelled out by a Ronald Araujo header on the stroke of half time.

Barca move up into seventh place in the standings, only one point behind Atletico in fourth but an incredible 18 points behind runaway leaders Real Madrid.

Real Betis are third, while Rayo Vallecano are the surprise side of the season so far as they sit in fourth place.