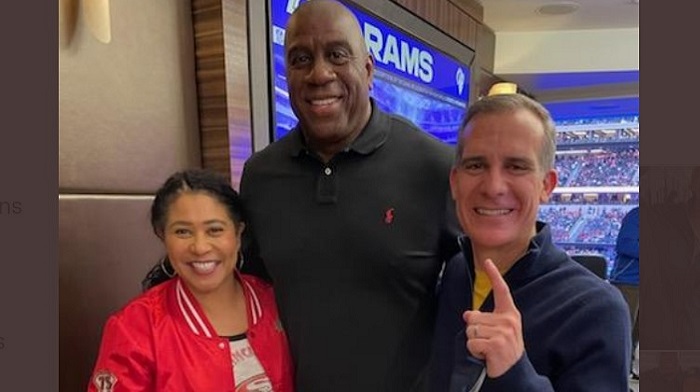 Los Angeles Mayor Eric Garcetti, under fire for taking a maskless photo with NBA legend Magic Johnson in defiance of his own local COVID protocols, downplayed concerns and defended himself by saying he held his breath during the brief interaction.

Johnson shared an image on social media of himself with Garcetti and San Francisco Mayor London Breed without masks in a suite during the NFC Championship game on Sunday.

“Hanging out at SoFi Stadium today!” Johnson captioned a series of images that also showed California Governor Gavin Newsom and numerous other pro-mandate politicians posing for pictures in a similar manner.

Los Angeles County has a mask mandate “in all indoor public settings” and at “outdoor Mega Events” such as sporting events.

Garcetti: I Was Holding My Breath

Garcetti and the other Democrat politicians involved in the photoshoot were on the receiving end of a fair amount of scrutiny for disregarding their own masking requirements and the arena’s policy.

Garcetti though, offered a unique and eyebrow-raising defense for his actions, while condescendingly taking responsibility to make the critics “happy.”

“I’ll take personal responsibility and if it makes you and everybody else happy or even the photographs with people where I’m literally holding my breath for two seconds I won’t even do that,” he promised.

Dr. Gregory Poland, a Mayo Clinic professor of medicine and infectious diseases and director of the Mayo Clinic’s vaccine research group, told the Star Tribune that holding your breath is no substitute for mask-wearing.

Poland added that holding your breath, as Eric Garcetti uses as a defense for his actions, can actually be counterproductive because the person will likely exhale forcefully when they’re done.

If you’re infected and don’t know it, “you have now spread that virus for about 30 feet around you,” Poland said.

MIT Medical describes the technique of holding one’s breath to avoid spreading COVID as “not at all helpful.”

Eric Garcetti has assured the public he was holding his breath in the maskless football game photos. Yes, his defense is he didn’t exhale.

RELATED: AOC Says She’s Been Avoiding Twitter Due To ‘Anxiety’ After Being Criticized For Getting COVID And Partying Maskless In Florida

San Francisco Mayor London Breed has been a habitual violator of mask mandates in her own city.

Breed was caught dancing indoors in tight quarters while catching a live jazz show back in September, violating her city’s mask mandate.

She blasted critics of her hypocrisy, bashing the “fun police” and saying her actions were permissible because she was “feeling the spirit” at the time.

“I was feeling the spirit and I wasn’t thinking about a mask.”pic.twitter.com/lFTFCgzihZ

Breed was also feeling the spirit while dining at the French Laundry in similar circumstances to Governor Newsom in November of 2020.

And again, obviously, at the NFL game.

Newsom, meanwhile, is also a habitual offender and “rules for thee, but not for me” enthusiast.

The Democrat governor in 2020 was caught red-handed violating orders that gatherings be limited to just three households and warning that singing and shouting is “strongly discouraged” indoors.

Newsom was caught dining at a restaurant known as The French Laundry, and his party, according to reports at the time included 22 people, was held indoors, and was “so loud, other patrons complained.”

EXCLUSIVE: We’ve obtained photos of Governor Gavin Newsom at the Napa dinner party he’s in hot water over. The photos call into question just how outdoors the dinner was. A witness who took photos tells us his group was so loud, the sliding doors had to be closed. 10pm on @FOXLA pic.twitter.com/gtOVEwa864

Perhaps they were all holding their breath in all of these photos.

It’s more likely they’re nothing more than hypocrites who know they don’t have to follow their own rules while wining and dining with celebrities.

Rules, you see, are for the little people.