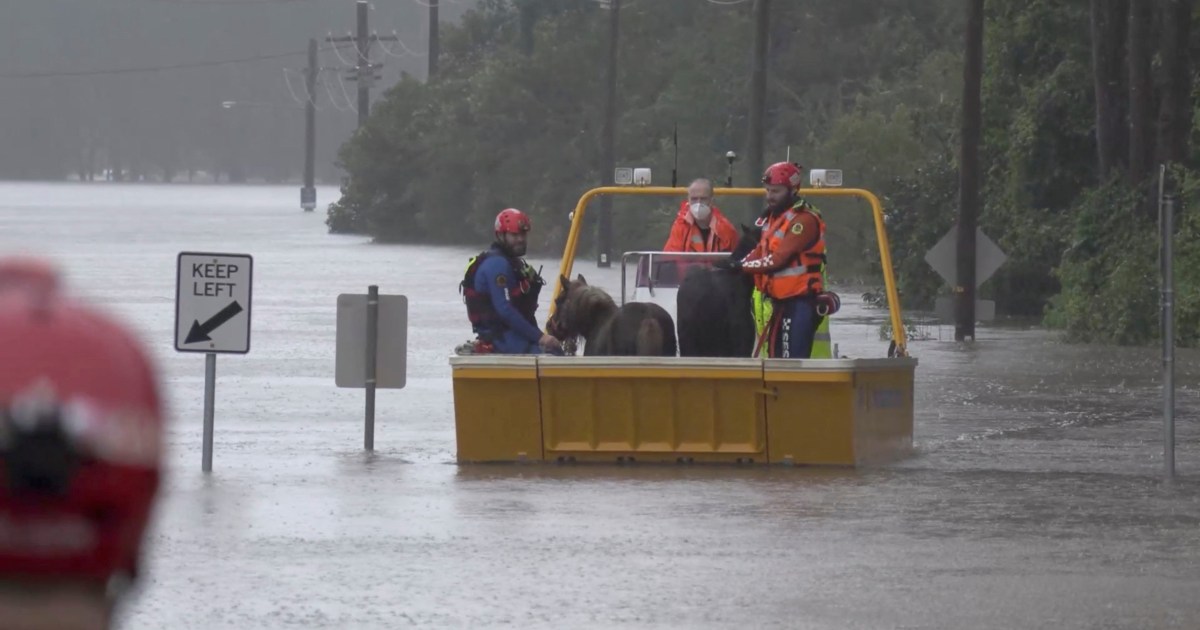 Thousands of residents in Sydney’s suburbs are ordered to evacuate amid torrential rains and the threat of flash floods.

Thousands of residents have been ordered to evacuate southwest Sydney, Australia’s biggest city, with torrential rain and damaging winds pounding the east coast and floods expected to be worse than those that hit the region in the past year.

Heavy rain and overflowing dams and rivers all combined to threaten flash floods and landslides along the east coast from Newcastle to Batemans Bay in New South Wales state on Sunday, and rain was expected to intensify in the night.

“If you were safe in 2021, do not assume you will be safe tonight. This is a rapidly evolving situation and we could very well see areas impacted that have never experienced flooding before,” New South Wales Minister for Emergency Services Steph Cooke said in a televised media briefing on Sunday evening.

Earlier in the day, she urged people to reconsider holiday travel, with the rough weather having hit at the beginning of school holidays.

“This is a life-threatening emergency situation,” Cooke said.

More than 200mm (8 inches) of rain have fallen over many areas, with some hit by as much as 350mm (13.8 inches), the Bureau of Meteorology said, warning of flood risks along the Nepean and Hawkesbury Rivers. The volume of rainfall is almost half of Sydney’s annual average.

Australia has been at the sharp end of climate change, with droughts, deadly bushfires, bleaching events on the Great Barrier Reef and floods becoming more common and intense as global weather patterns change.

Camden in southwest Sydney was underwater, and the weather bureau predicted water levels in the areas of North Richmond and Windsor northwest of Sydney would peak at higher levels than in the past three major flood events since March 2021.

“This could get significantly worse over the night,” State Emergency Service Commissioner Carlene York said.

The heavy rains caused Sydney’s main dam to spill over early on Sunday morning, water authorities said, adding that modelling showed the spill would be comparable to a major spill in March 2021 at the Warragamba Dam.

“There’s no room for the water to remain in the dams. They are starting to spill. The rivers are flowing very fast and very dangerous. And then we have the risk of flash flooding, depending on where the rains are,” York said.

Emergency services said they conducted more than 100 flood rescues and responded to more than 3,000 requests for assistance in the past 24 hours. Evacuation centres have opened in several areas in western Sydney.

In the past 24 hours, 29 people have been rescued from floodwaters, including one woman who was hanging on to a pole for an hour as workers struggled to reach her.

The body of a man who fell out of a kayak was pulled out of Sydney Harbour, police said, adding that the circumstances were under investigation but appeared to be linked to the windy conditions.

The Australian government has provided the state with 100 troops and two helicopters to aid with any rescues, Defence Minister Richard Marles said on Sky News.

“That’s produced some extraordinary rainfall rates over the last 24 hours,” she said.