Home News Madagascar hit by second cyclone in two weeks
Cyclone Batsirai slammed into the Indian Ocean island late on Saturday, battering the eastern coastline until it moved away late on Sunday, leaving at least 10 people dead, 43,000 displaced and some towns and villages largely destroyed. 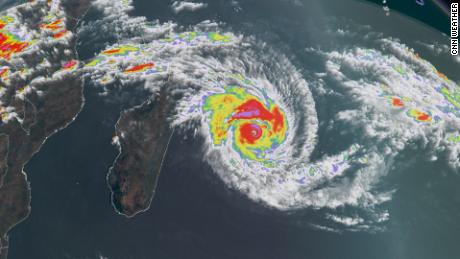 Madagascar, with a population of nearly 30 million, had already been dealing with the aftermath of Cyclone Ana, which killed 55 people and displaced 130,000 just two weeks earlier, as well as with a drought and food emergency in its southern Grand Sud region.
President Andy Rajoelina flew into the coastal town of Mananjary, normally about 500 kms (311 miles) by road southeast of the capital Antananarivo. Land routes to Mananjary were cut off due to flooding and the town was reported to be devastated.
Rajoelina said on his Facebook page he was there to show solidarity with people who had lost loved ones and homes, and to see for himself what was needed in terms of aid.
Madagascar’s state disaster relief agency said it was providing basics to 43,000 people in 180 temporary shelters, while the United Nations’ World Food Programme (WFP) said it had started distributing hot meals to 4,000 evacuated people.
A WFP spokeswoman said the organisation was conducting an aerial survey of affected areas to better assess needs.
The WFP warned that the impact of Cyclone Batsirai could be worse than estimated ahead of the storm’s arrival, because water levels in rivers and canals were continuing to rise.
The state disaster relief agency said 14 bridges and 12 roads were impassable due to flooding, while more than 200 schools were partially or fully destroyed, leaving more than 10,000 children unable to attend lessons.