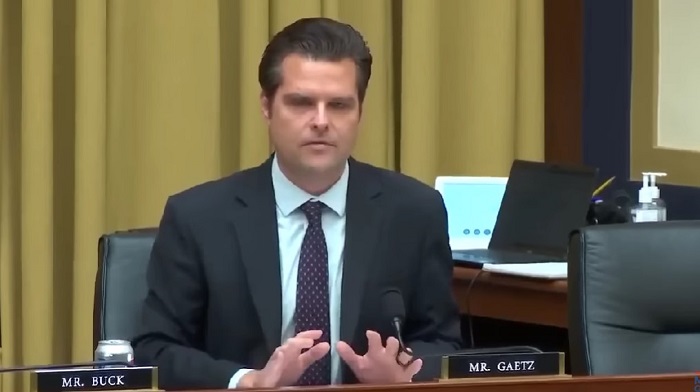 Gaetz’s argument surrounds the deadly fentanyl crisis that is killing an untold number of Americans every day. The CDC reported that in 2020, over 68,000 Americans died of opioid overdose, with 82% of those being synthetic opioids – fentanyl.

Speaking before the House Judiciary Committee, the Florida Republican addressed the crisis, noting that people aren’t actively seeking out fentanyl as they would other drugs.

“It irks me every time I hear someone talk about fentanyl overdoses because – no one overdoses on fentanyl because – I don’t think anybody really sets out to, like, score some fentanyl for a good time,” he said.

Congressman Matt Gaetz argued that, as an unwanted commodity, “we should be totally capable of stopping” fentanyl from coming into the United States.

“And the only reason we aren’t is because we purposefully allow our border to degrade, not by accident, not because of some lack of capability or some unsolvable problem set,” he argued.

“But because there are some groups on the right and left who think that they will do better economically if we just let millions of people into the country and depress the wages of Americans, and the cost they’re willing to pay for that are the funerals and the deaths and the broken lives as a result of fentanyl poisoning,” Gaetz continued.

The MAGA Republican shared a clip of his address to the committee and called for bombing the infamous Sinaloa drug cartel, one the most powerful drug trafficking organizations in the world.

“Bomb Sinaloa,” he wrote. “Not kidding.”

What’s a Couple of Tomahawk Missiles?

Gaetz had initially made the suggestion during his House Judiciary Committee address, arguing that lobbing a few missiles into Mexico is peanuts compared to the unnecessary war effort the U.S. endured in Afghanistan.

And it would directly result in saving American lives.

“Tens of thousands of Americans are poisoned by fentanyl over and over again in every community,” he fumed.

“Yet after a 20-year war in the Middle East, we seemingly clutch our pearls at the suggestion that we might think about dropping off a few Tomahawk missiles in the Sinaloa Mountains.”

Tens of thousands of Americans are poisoned by fentanyl over and over again in every community.

Yet after a 20-year war in the Middle East, we seemingly clutch our pearls at the suggestion that we might think about dropping off a few Tomahawk missiles in the Sinaloa Mountains. pic.twitter.com/iTFSnaBM9T

“The president pulls me aside on at least a couple of occasions and suggests that maybe we have the U.S. military shoot missiles into Mexico,” Esper said during a “60 Minutes” interview.

“We could just shoot some Patriot missiles and take out the labs, quietly,” Esper also alleged Trump contested, according to his memoir. “No one would know it was us.”

The New York Times reported that Trump also had to be talked out of launching secret military raids in Mexico to take out the drug cartels.

Trump, they wrote, “pressed his top aides to send forces into Mexico itself to hunt drug cartels, much like American commandos have tracked and killed terrorists in Afghanistan or Pakistan.”