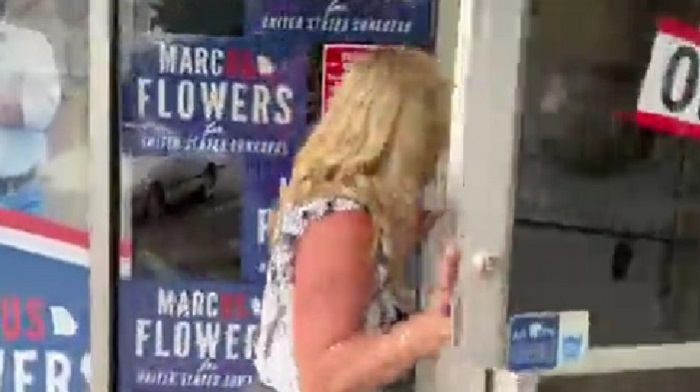 Marjorie Taylor Greene paid a visit to the campaign office of Democrat candidate Marcus Flowers to wish their team “luck,” and couldn’t help but remark on the place looking empty and messy.

“Rep. Greene kicked me out of her rally last year, but I didn’t make her leave our office,” he said, later adding a campaign fundraising plea based on the encounter.

Rep. Greene kicked me out of her rally last year, but I didn’t make her leave our office.

I’d much rather voters in Georgia remove Rep. Greene from her office in November. pic.twitter.com/eXuDKGVBi6

Newsmax host Benny Johnson posted video presumably from a Greene aide who had followed close behind with his cell phone camera.

“What happens next is pure comedy gold,” Johnson tweeted.

Indeed, rather than encountering a bustling campaign headquarters, Greene seemed taken aback by the empty office space and what appears to be a lone worker there to accept her message.

After stating she is personally feeling “fantastic about tomorrow,” Greene asked, “Is somebody working here?”

“A little messy at the front door, baby” she critiqued after looking around the place. “Yea, leaving the food around … and the chips.”

In a chipper voice she departs, “Well, good luck guys!”

MTG walks into Democrat opponent’s office to wish them “luck.”

What happens next is pure comedy gold.

Flowers Kicked Out of MTG Rally

The rally Marcus Flowers is referring to is when he tried to enter an event featuring Representatives Greene and Matt Gaetz (R-FL) nearly a year ago.

“Just got kicked out of the ‘America First’ rally with Marjorie Taylor Greene and Matt Gaetz because they said I was a threat,” Flowers says in a video posted to Facebook.

Flowers, or any Democrat candidate for that matter, is considered a long shot to unseat Greene after she won in 2020 with nearly 75 percent of the vote.

Her biggest test will come in today’s GOP primary in Georgia’s 14th Congressional District, following a failed effort to disqualify her by opposing voters.

@RepMTG is a treasure.

Greene’s opponents are hoping to latch on to the conservative firebrand’s controversial history. She was removed from the Education and Labor Committee as well as the Budget Committee for ill-advised social media posts made prior to her election to office.

She was recently accused by fellow Republican Representative Dan Crenshaw (TX) of ‘siding with Russia’ by not supporting a $40 billion aid package to Ukraine even as Americans are struggling.

I want to remind Congress we swore an oath to uphold and defend the Constitution of the United States of America.

It’s time to pay attention to our country and our borders.

“How does that help Americans? How does any of this help?” she fired back.

“I refuse to vote for useless measures that cause problems but solve none,” Greene told Crenshaw. “While you send $40 billion for your proxy war against Russia, I’m focused on baby formula for American babies.”

Marjorie Taylor Greene’s ‘America First’ platforms and campaign war chest could carry her to victory over her opponents Tuesday. Perhaps, if Flowers wins his primary, she’ll celebrate by sending his campaign a case of chips.