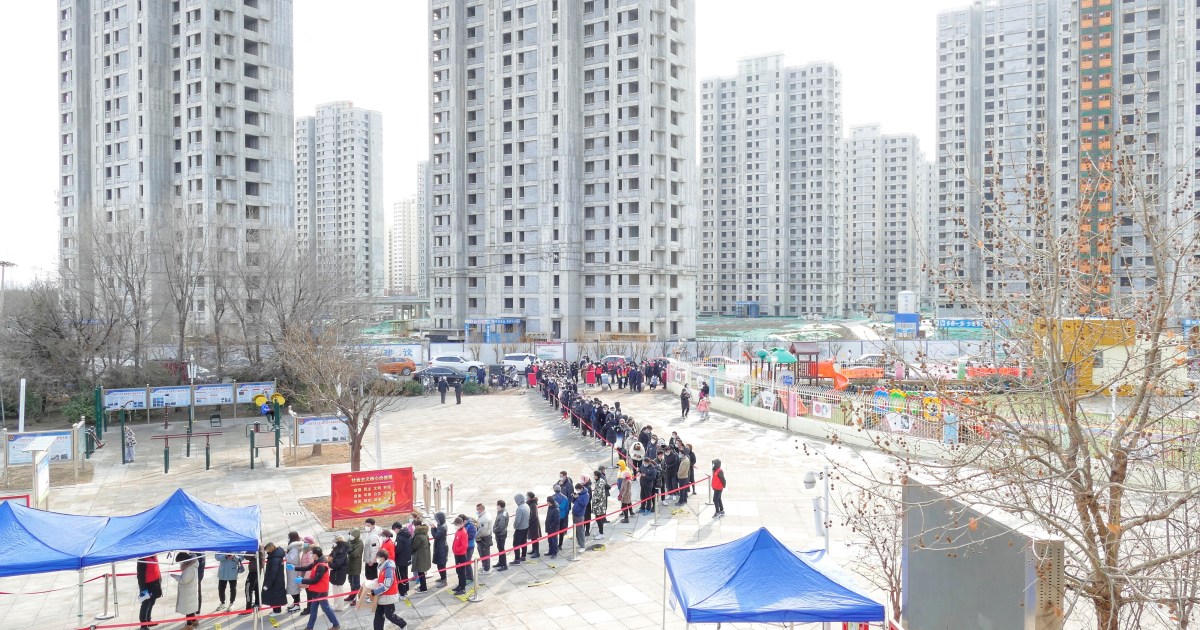 The more infectious Omicron coronavirus variant appears to produce less severe disease than the globally dominant Delta strain but this has not prevented governments from tightening restrictions in an effort to prevent yet another wave of mass infections.

The United Nations health agency, in its weekly report on the pandemic, said the weekly count amounted to 9,520,488 new cases – with 41,178 deaths recorded last week compared with 44,680 in the week before that.

World Health Organization Director-General Tedros Adhanom Ghebreyesus earlier in the week warned although the caseload seemed significant relative to previous weeks, the figure was certainly an underestimate because of a backlog in testing around the year-end holidays.

Here’s a quick roundup of the latest developments:

Authorities in the Chinese port city of Tianjin said they began a citywide testing campaign of its 14 million residents after a cluster of 20 children and adults tested positive for COVID-19, including at least two with the Omicron variant.

Those infected include 15 students, a staff member at an after-school centre, and four parents. The campaign is to be completed over two days.

The announcement on Sunday comes as China stepped up its zero-tolerance COVID-19 strategy in the run-up to the Winter Olympics, which are set to commence on February 4 in Beijing.

The Chinese capital is located some 115km (71 miles) northwest of Tianjin and is connected by a high-speed rail link that takes less than one hour.

The first two cases confirmed in Tianjin were a 10-year-old girl and a 29-year-old woman working at the after-school centre. Both were infected by the Omicron strain. In subsequent testing of close contacts, 18 others tested positive and 767 tested negative as of Saturday night.

Indian authorities reported 159,632 new COVID-19 cases on Sunday, forcing several states to impose new restrictions in an effort to curb the spread of the virus.

India’s richest state, Maharashtra, said it would close swimming pools and gyms from Monday while schools and colleges were closed till February 15 after daily cases in the state jumped to more than 41,000.

The state government has said only fully vaccinated people will be allowed into private offices while limiting the capacity to 50 percent of the total workforce.

In the neighbouring state of Gujarat, authorities extended night curfew hours and cancelled leave for all healthcare personnel.

Prime Minister Narendra Modi will chair a meeting to review the COVID-19 situation later on Sunday.

The health ministry reported 327 new deaths, taking the official death toll since the start of the pandemic to 483,790. Total infections stand at 35.52 million.

Israel, which has begun administrating a fourth jab to its most at-risk groups, announced eased access to home COVID-19 tests to allow people to decide whether to quarantine at home amid shortages in shops and complaints about high prices.

“We are mindful of the public’s distress,” Prime Minister Naftali Bennett said at the weekly cabinet meeting, announcing every child in kindergarten or elementary school in Israel would be issued with three free kits in the coming days.

The government was also negotiating price reductions with main pharmacy chains, Bennett said, adding: “In any event, costs will come down in the near future because the market will be flooded with millions of kits that will arrive in Israel.”

The kits cost 25 to 35 Israeli shekels ($8 to $11) in stores, many of which have been reported running out. Nachman Ash, director-general of the health ministry, told 103 FM radio that the unit price should be no more than 10 shekels ($3).

With a surge in COVID-19 infections and hours-long queues at mandatory testing stations, Israel last week said PCR and professionally administered antigen tests would only be required for people over the age of 60 or with weak immune systems.

Other vaccinated people could now rely on home tests, but there was some scepticism about the efficacy of those.

Data released on Sunday said Africa has registered a total of more than 10 million coronavirus cases.

Statistics from the Africa Centres for Disease Control showed there had been 10,028,508 cases reported by the African Union’s 55 member states since the outbreak of the pandemic.

Indonesia needs earthquake-proof houses. Building them is a huge challenge
Uganda extends quarantine in Ebola epicentre for 21 days
Fuller scores for Costa Rica to stun Japan
Family Arrives for Thanksgiving Dinner—and Finds Host Dismembered
Crew on a 160-foot superyacht sleep in tiny hidden cabins and only get paid about $1,400 a month – but the tips can be big
iPhone Production Said to See 30 Percent Slump After Disruption at Foxconn Plant in China
Share This Post
Comment

Indonesia needs earthquake-proof houses. Building them is a huge challenge

Crew on a 160-foot superyacht sleep in tiny hidden cabins and only get paid about $1,400 a month – but the tips can be big

Indonesia needs earthquake-proof houses. Building them is a huge challenge

Crew on a 160-foot superyacht sleep in tiny hidden cabins and only get paid about $1,400 a month – but the tips can be big

The Ohana is a 160-foot yacht based in Split, Croatia.Goolets Crew members on the Ohana,…