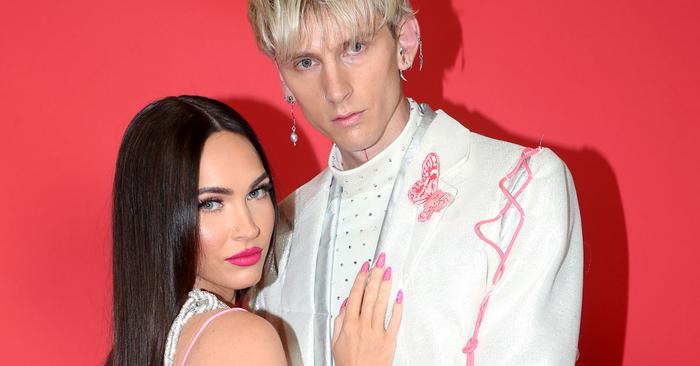 Congratulations are in order: Megan Fox and Machine Gun Kelly are officially engaged. Luckily for us, they recorded the whole thing on video, and it’s just too cute for words. During the proposal under a tree that holds a special meaning in their relationship, Fox was wearing a cutout bra top and black maxi skirt. You didn’t expect her to be in sweats, did you?

Now for the best part: The huge engagement ring was custom-designed by Machine Gun Kelly with sweet symbolism. “I know tradition is one ring, but I designed it with Stephen Webster to be two: the emerald (her birthstone) and the diamond (my birthstone) set on two magnetic bands of thorns that draw together as two halves of the same soul forming the obscure heart that is our love,” he said in his Instagram caption.

The double-stone ring trend is getting increasingly popular as of late. For instance, both Emily Ratajkowski’s and Ariana Grande’s engagement rings feature two baubles. Scroll down to get a close-up look at Megan Fox’s engagement ring, and shop the trend.

Fall’s Best Nail Trends Are Hot Off the Press, and Here Are My 8 Favorites

Fall’s Best Nail Trends Are Hot Off the Press, and Here Are My 8 Favorites

As a beauty editor, I am constantly trying many, many new products. It’s important that…