Home News Nancy Pelosi To US Athletes: Don’t Speak Out Against China At The Olympics And Risk ‘Incurring’ Their Wrath 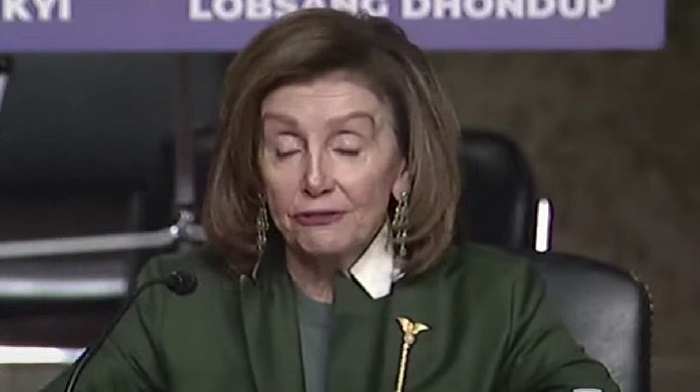 Nancy Pelosi warned American athletes to resist the urge to speak out against China during the Olympics in Beijing on Thursday.

The House Speaker, in a remarkable statement, suggested athletes should not criticize the “ruthless” Chinese communist government over human rights abuses for fear of incurring their wrath.

“I would say to our athletes, you’re there to compete. Do not risk incurring the anger of the Chinese government because they are ruthless,” she said.

“I know there is a temptation on the part of some to speak out while they are there,” added Pelosi. “I respect that, but I also worry about what the Chinese government might do … to their reputations, to their families.”

House Speaker Pelosi warned U.S. Olympic athletes not to speak out about human rights issues while overseas for the Winter Games, for fear of retaliation by a “ruthless” Chinese government. pic.twitter.com/Iha6rpFeFY

Pelosi’s comments were accompanied by a recognition that speaking out against human rights abuses in China is a necessity, just that the Olympic games may not be the proper venue.

In May, the California Democrat called for a “diplomatic boycott” of the 2022 Winter Olympics in Beijing in response to China’s human rights record.

“We cannot proceed as if nothing is wrong about the Olympics going to China,” Pelosi told the congressional Human Rights Commission and the Congressional-Executive Commission on China during a hearing.

The Chinese government has been accused of genocide against Uyghur Muslims and other ethnic and religious minorities, placing them in state-sponsored internment camps.

House Speaker Nancy Pelosi said the United States has a moral duty to condemn China’s rights abuses but she urged U.S. athletes not to risk angering the ‘ruthless’ Chinese government, a day before the opening of the Beijing Olympics https://t.co/Ssa33rpQV5 pic.twitter.com/iFGwKJjYjA

Still, it’s bizarre to hear Nancy Pelosi tell United States athletes to bow to pressure from the Chinese government and not speak out against human rights violations at the Olympics.

If American athletes do not take a stand, who will?

Democrats didn’t always support such a position of obedience to authority in sporting events.

The White House this past June backed Olympic athlete Gwen Berry’s right to turn her back on the American flag, saying pride and patriotism include pointing out when the United States hasn’t lived up to “our highest ideals.”

The Biden WH gives support to Gwen Berry turning her back on the national anthem during #TrackFieldTrials21. While Jen Psaki hasn’t spoken to Biden about her, she said “pride” in America means “respecting” those who recognize when we “haven’t lived up to our highest ideals” pic.twitter.com/OVgQXg3YAz

Sporting events, in fact, have been fertile ground for Democrat protests over the last few years.

The left has fallen all over itself in trying to defend Colin Kaepernick in his various forms of protest against the NFL, protests indicating police officers in America are pigs, protests lending support to Fidel Castro, and protests suggesting America is racist.

President Biden and his party were ecstatic over Major League Baseball moving the All-Star game out of Georgia last year in protest of a voting law they pretended was far more restrictive than it actually was.

“I think today’s professional athletes are acting incredibly responsibly. I would strongly support them doing that,” Biden said. “People look to them. They’re leaders.”

Biden will not back an athletic boycott of the 2022 Winter Olympics in Beijing, but backed a boycott of Atlanta by the MLB All-Star Game

Now, Pelosi doesn’t want leaders, she wants athletes to cower in the face of fear, the face of the Chinese government.

She didn’t have a problem protesting alleged ‘police brutality’ in America when she and her fellow Democrats kneeled on behalf of the ‘martyr’ George Floyd.

“The martyrdom of George Floyd gave the American experience a moment of national anguish as we grieve for the black Americans killed by police brutality today,” explained Pelosi at the time.

Each Democrat was sporting a ‘Kente cloth,’ a symbol of African heritage.

Congressional Democrats take a knee as they observe a nearly nine minute moment of silence for George Floyd at Emancipation Hall at the U.S. Capitol. https://t.co/JnqDlzMFDq pic.twitter.com/8CBdgtLUjz

Democrats – Kneeling to protest America, but standing at attention to China.

In contrast to Nancy Pelosi, Senator Ted Cruz (R-TX) urged the United States to go to the Beijing Olympics and “highlight China’s oppression.”

“I think we go and speak the truth. We go and highlight China’s oppression. We go and tell the world about what’s happening,” said Cruz.

He also said he hoped that American athletes go to China and “kick their commie asses.”

At the Winter Olympics in Beijing, we must:

1. Have the courage to call out the murder, the genocide, the torture, and the lies and the complicity in COVID-19 of the Chinese Communist government.

Perhaps instead of warning athletes against speaking out, Pelosi and her colleagues should warn China against oppressing the freedom of speech of those competing in the Olympics.