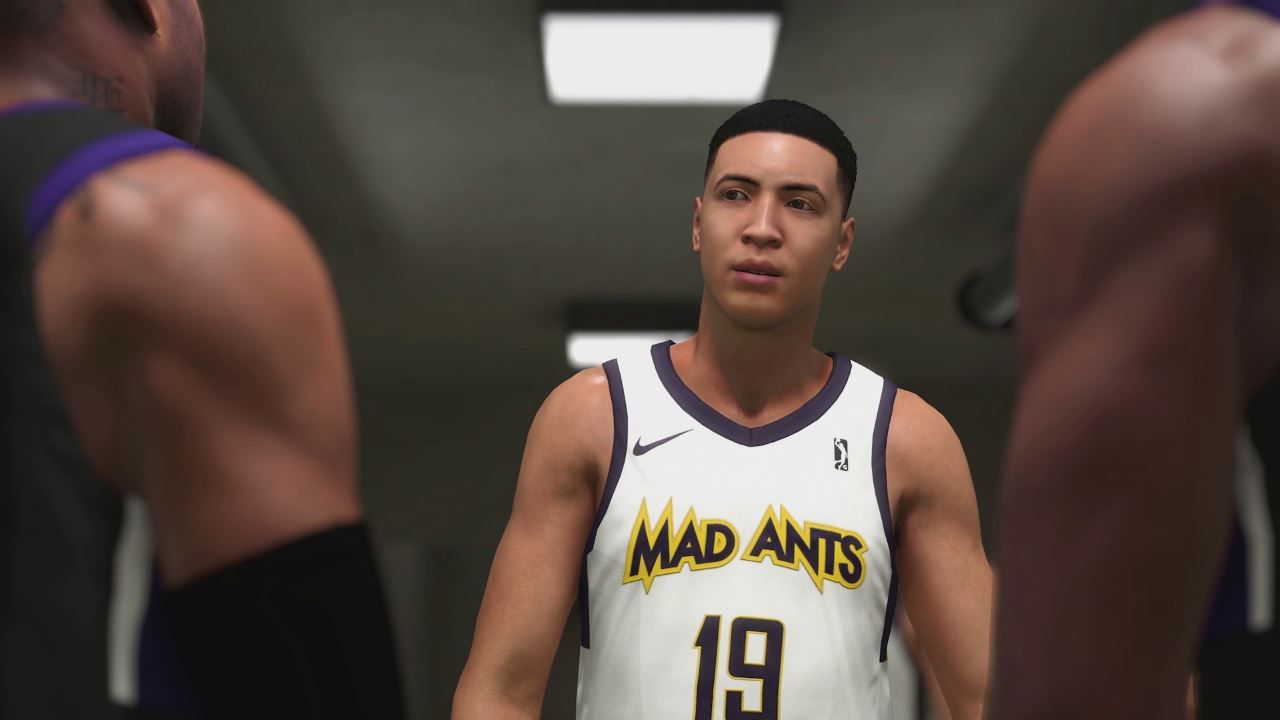 Last year, the NBA 2K team put out one of its worst efforts with story-based mode MyCareer, thanks to a terrible story of a former basketball hotshot returning to the sport after a short-lived career as a DJ. This was compounded by 2K’s decision to turn player development into a money-making scheme, putting micro-transactions everywhere in a game you already paid a fair amount of money to purchase. It was disastrous to say the least and set a new nadir for the franchise, just two years after the heavily-restrictive storytelling of Spike Lee. NBA 2K set the bar so low that anything it would do next year would surpass that. Thankfully, NBA 2K19 does a little more than that.

For one, the new MyCareer in NBA 2K19 has a much better story. You play as a college star — nicknamed AI — who fails to be picked in an NBA Draft and then ends up in China playing for the fictional Shanghai Bears team. It’s a novel idea, one that’s unexpected, jarring, and even disorienting, what with the coach’s instructions and commentary all being in Mandarin. While you’ve a translator for the former, you just have to live with the latter. It really makes you feel out of place, which is most likely what 2K was going for. We loved it so much that we wish EA Sports would pick up on that aspect for FIFA’s next foray with The Journey, given the game and sport’s worldwide popularity, and that it’s finishing its story this year.

Additionally, the writers of NBA 2K19 not only acknowledge the character’s flaws — instead of ignoring them as NBA 2K18 did — but they also use that to craft a sensible narrative. The protagonist longs to return to the NBA as soon as possible, feels short changed for the effort he puts in, and thinks he deserves better. In short, he’s a little full of himself. That’s a dangerous attitude for a rookie to have and the game’s opening hours make it all too clear. After a few games with the Shanghai Bears, NBA 2K19’s MyCareer pits you against the NBA All-Stars as part of their global tour. AI thinks this is his shot to impress American scouts and the game even hands you a scripted moment where you dunk over a former college teammate, which soon becomes a viral video clip.

The next day, your Chinese coach informs you that you’re being traded away and a cutscene later, you’re back in Los Angeles and headed to the home of the Lakers. It all feels like it magically worked out for AI despite his attitude but it’s only when he arrives at the training centre does he realise that he’s been traded to the South Bay Lakers — they play in the minor NBA G League — not the Los Angeles Lakers. And even before your character has fully accepted the reality of the situation, he’s traded again to another G League team called Fort Wayne Mad Ants in rural Indiana. The quick double whammy really lets you feel the consequences of AI thinking he deserves better, though the execution could have done with a little polish.

Along the way, NBA 2K19’s MyCareer introduces a bunch of new characters, some intriguing, some goofy and others forgettable. Anthony Mackie (Avengers: Infinity War) shows up now and then as a mysterious NBA scout who’s tracking AI, Aldis Hodge (Straight Outta Compton) plays that aforementioned former college teammate who tells AI to keep his head in the game, Michael Rapaport (True Romance) portrays the coach of the Lakers while Rob Huebel (Transparent) stars as the Mad Ants coach, Haley Joel Osment (The Sixth Sense) plays a Fort Wayne social media influencer who promises to turn you into a viral star, and Ricky Whittle (American Gods) is an NBA veteran who’s now with the Mad Ants. Their combined acting talents help the game feel lived-in, but recurrent 2K problems get in their way.

Unlike EA Sports’ story-based efforts, where the narrative is deeply intertwined with your entire game time, 2K has mostly opted for a more open-ended approach that begins with a preamble chapter called ‘The Prelude’ which details your player’s rookie years before he lands in the NBA and then leaves you to it, with minimal interruptions thereafter. And because it’s trying to convey most of its story upfront, the early hours of MyCareer in NBA 2K19 feature unplayable vignettes that sometimes run more than 10 minutes long. It’s almost like watching a TV show where you get to play at times in between. The game would be much more better off if its Shanghai-Los Angeles-Indiana journey played out over a few fully-playable seasons.

But it doesn’t do that and hence everything just feels rushed. You’re pitted against the NBA All-Stars two games into China as a 60-rated player, being asked to beat them and earn a B performance rating. That scripted dunk moment doesn’t take any user customisations into account either, which became even more unrealistic for us given our player’s dunk values were the lowest of the lot due to the chosen height, strength, and wingspan. It’s only once you get to Fort Wayne that NBA 2K19’s MyCareer finally slows down a notch and AI gets a run of games, in addition to sketching out promising new side story arcs, with one of them being a potential romantic relationship.

Unfortunately, they don’t get the right treatment since the game has to push you into the NBA, which it scripts in the most absurd fashion as well. After getting kicked off Mad Ants for being involved in a fire-related incident, AI becomes a free agent whom no one wants anything to do with until his former coach and assistant at the South Bay Lakers show up out of the blue, looking to hire him for the NBA team — Minnesota Timberwolves — they now work with. It’s not only unconvincing — AI’s career was on a downward trajectory — but it also negates the themes NBA 2K19 had presented till that point; if you want players to feel down on their luck, you must 1) let them feel it over a period and 2) not include a get-out-of-jail-free option that turns them from zero to hero.

These writing issues likely stem from 2K’s financial interests regarding its basketball title. For the quicker MyCareer gets you into the NBA, the quicker it can roll out the faux open-world known as ‘The Neighborhood’ — first introduced in NBA 2K18 last year — that lets you walk around and access your home, the gym, the team’s training arena, community courts, and virtual stores. But more importantly, NBA 2K19 hopes players will spend real money on buying VC (Virtual Currency), the in-game currency that is needed to improve your player’s stats such as attack, defence, and physical abilities. Its introduction last year was egregious and it’s a shame that the option is still around.

Starting with a 60 overall rating as in previous years, you will need about 2,00,000 VC to reach 85, which is necessary for those wanting to play against others online. You earn VC for playing games across NBA 2K19 game modes but if you plan to spend all your time in MyCareer, playing matches and getting some game time in Neighborhood will net you a maximum of 2,000 VC per cycle. And that’s if you perform really well. Essentially, you’re looking at a long and tough grind to level up your player. Or you can simply fork over Rs. 4,000 for 2,00,000 VC. Sure, you will need to put in a bit of work if you want to go beyond that, but that doesn’t excuse the pay-to-win aspect. (For what it’s worth, 2K has complied with loot-boxes bans in Belgium and the Netherlands, unlike EA.)

2K faced heavy backlash last year for tying player upgrades to real money last year, and its parent company Take-Two CEO Strauss Zelnick issued a tone deaf response on the matter back in June. He argued that people want “everything for free” and they “can’t really help them” as the company is interested in offering “a fair deal” while giving them “much more than they paid for”. His statement overlooked the fact that NBA 2K19 costs Rs. 3,000 or more upfront to buy, and suggested that 2K isn’t interested in listening to fans. Take-Two has seen massive success with micro-transactions in GTA V’s online mode and WWE 2K remains the last bastion yet to cave in.

On top of all the problems, NBA 2K19 is reportedly suffering from several bugs since launch in September, including lost in-game currency, progression problems, and even file deletions in MyCareer, though we haven’t faced any such issues in our time with the game so far. Hopefully, 2K will put things back in order or refund people’s money at the least, but it’s yet another reason for people to stay away. The game is still excellent on the court — the presentation is superlative and the gameplay benefits from a more noticeable skill gap, improved shot meter and stamina system — but everything around it seems to signal that 2K simply doesn’t care, and maybe we the players should stop as well.