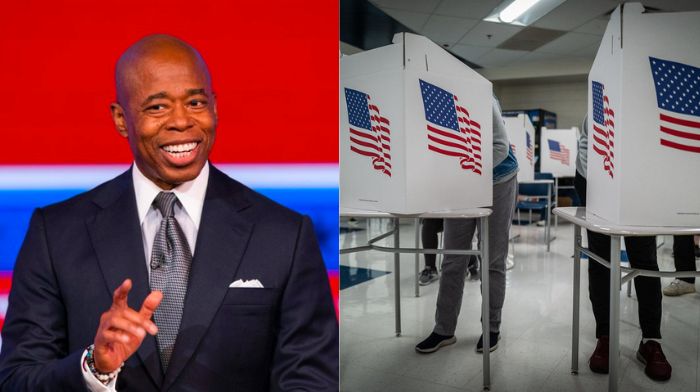 New mayor of New York City Eric Adams started his term to the left of even former mayor Bill DeBlasio.

On Saturday, Adams issued a statement saying that he supports non-citizens who reside in the Big Apple the right to vote in local elections.

Today, Adams allowed the “Our City Our Vote” measure to become law, giving roughly 800,000 non-citizens the right to vote in municipal elections.

Mayor Says He Had ‘Some Concerns’

Adams issued a statement on the bill on Saturday saying, “I believe that New Yorkers should have a say in their government, which is why I have and will continue to support this important legislation.”

“While I initially had some concerns about one aspect of the bill, I had a productive dialogue with my colleagues in government that put those concerns at ease. I believe allowing the legislation to be enacted is by far the best choice, and look forward to bringing millions more into the democratic process.”

The bill was passed by the City Council back in December. At the time, several New York lawmakers, constitutional experts, and even uber-liberal DeBlasio had also voiced apprehension over the bill’s legalities.

Adams did not elaborate on what is concerns were.

Now, it’s the law of the city.

Good luck to the voting public in New York City.

RELATED: We Have The Tools To Keep Schools Open

While Eric Adams feels like letting those who are not American citizens vote is “the best choice,” he is singing a very different tune when it comes to COVID.

During an interview with ABC News, Adams stated that he would keep many of former mayor DeBlasio’s strict COVID restrictions, some of the harshest in the nation.

The city requires proof of vaccination – called “Key to NYC” – for a whole host of normal societal activities. For example, going to a restaurant or bar, gym, pool or fitness studio, movie theaters, concerts, and the like.

Adams said, “We’re going to examine the numbers, if we feel we have to get to the place of making that mandatory, we’re going to do that but we’re encouraging them to do it now.”

There’s nothing more important than preserving the integrity of our elections. That’s why I’ve joined my colleagues in filing a lawsuit to block @NYCCouncil‘s law that grants non-citizens the right to vote in violation of NY’s Constitution & Election Law.https://t.co/8Fmu2S6yhg

RELATED: California State ‘Superintendent Of Equity’ Made $160,000 While Living In Philadelphia

New York Not The First

While New York City will be the first major city to grant non-citizens voting rights, it is not the first overall. In Maryland, there are 11 towns where non-citizens can cast a ballot in a local election, and two in Vermont.

It is a move that brings, as the the mayor stated, many more voters to the polls, voters in a super blue city. Of the 7 million citizens of voting age in New York City, one in nine are non-citizens.

On the opposite side of the equation, several places like Alabama, Arizona, Colorado, and Florida have passed laws that would prevent non-citizens from voting in municipal elections.

In NYC non-citizens w/ 30 days residency will be able to vote . So anyone who doesn’t pay taxes & overstays a tourist visa can vote.This is a slap in the face of the millions of New Yorkers will legally live here, work & pay taxes #nyc #JerkoftheDay #vote https://t.co/GZxqXJt6rn