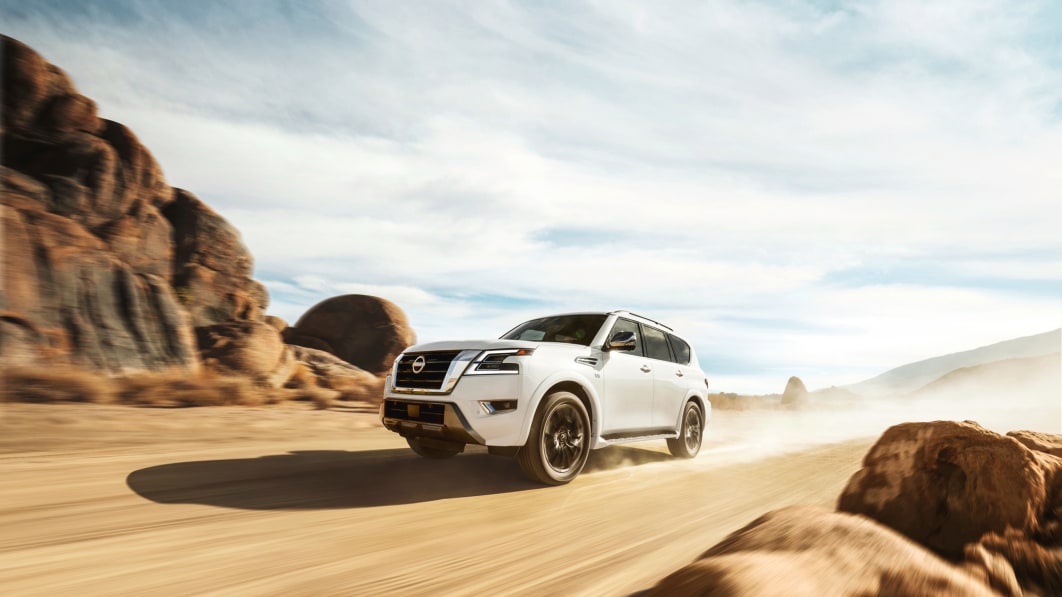 The Nissan Armada will soon drive into the magic booth that turns V8s into V6s. Nearly three years ago, Australian outlet CarSales wrote about Nissan commencing work on the next-generation Patrol, the 71-year-old off-roading nameplate that’s earned something close to legendary status in lands outside America. In America, we get the Nissan Armada and Infiniti QX80 that are heavily based on the Patrol. The CarSales piece alleged, “Also likely for the next Patrol is the move from a powerful 298-kW 5.6-liter V8 to a smaller capacity turbocharged petrol engine — possibly a V6 — that should produce both more power and torque while being significantly more efficient.” This week, Automotive News heard from dealer sources that a new-generation Armada should arrive in late 2023 with a twin-turbo V6 instead of the 5.6-liter Endurance V8 that has been the only engine the Armada has ever known.

When Nissan refreshed the current, second-gen Armada for the 2021 model year, engineers squeezed a bit more power out of the VK56VD eight-cylinder, getting 400 horsepower and 413 pound-feet of torque on premium gasoline. The price for all that power is EPA-rated fuel economy of 14 miles per gallon in the city, 19 mpg on the highway and 16 mpg combined when output goes to the rear axle only. On four-wheel-drive models, fuel economy drops by 1 mpg across the board. With competitors like the Toyota Sequoia going the six-cylinder route this year, the Jeep Wagoneer family expected to do so imminently, and the Ford Expedition doing so back in 2015, it’s a fine time for Nissan to roll with the tide. Toyota doesn’t hasn’t given us economy estimates for the Sequoia yet, but the Expedition improved its fuel economy across the board by 3 mpg in two-wheel drive, and by 4 mpg in four-wheel drive after the switch from Ford’s 5.4-liter V8 to the 3.5-liter EcoBoost V6.

Nissan already has a twin-turbo V6 in its engine family, the 3.0-liter six-cylinder in the Infiniti Q60 that’s headed for the 400Z, but we’ve no idea if it’s being considered for the Armada. With the Patrol being the root of Nissan’s large SUV family tree, it makes more sense to imagine the automaker is developing an engine that will serve that truck overseas, while being flexible enough to deliver the power, luxury, and tow rating to keep the Armada and QX80 in contention here.