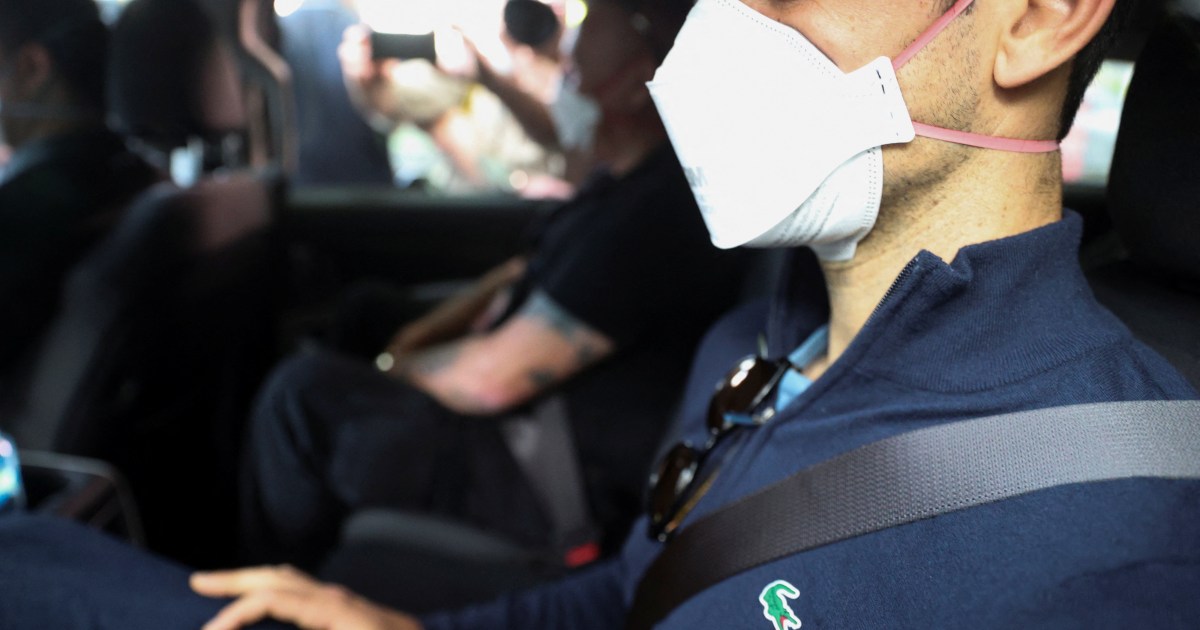 Serbian tennis player Novak Djokovic’s attempt to stave off deportation and be allowed to play in the Australian Open despite not being vaccinated against COVID-19 has failed, a day before he was scheduled to begin his title defence at a Grand Slam tournament he has won a record nine times.

On Sunday, three Federal Court judges in Melbourne upheld a decision made on Friday by Immigration Minister Alex Hawke to cancel the 34-year-old’s visa on public interest grounds.

Djokovic will remain in detention in Melbourne until he is deported. A deportation order usually also includes a three-year ban on returning to Australia.

Here is a look at the timeline of events involving Djokovic’s trip to Australia:

April 2020: As the coronavirus pandemic rages, Djokovic issues a statement, saying, “Personally, I am opposed to the vaccination against COVID-19 in order to be able to travel. But if it becomes compulsory, I will have to make a decision whether to do it, or not.”

June 2020: With the professional tennis tours on hiatus because of the pandemic, Djokovic organises a series of exhibition matches in Serbia and Croatia with no rules requiring social distancing or masking. The Adria Tour is called off after some players get COVID-19; Djokovic and his wife, Jelena, test positive.

November 19, 2021: Confirming an edict made by the Victorian state government in late October, tournament director Craig Tiley says everyone at the 2022 Australian Open must be vaccinated for COVID-19. Djokovic’s vaccine status is unknown at the time.

December 8, 2021: Victoria state Deputy Premier James Merlino says medical exemptions for the vaccine policy would not be “a loophole for privileged tennis players” and would only be possible in “exceptional circumstances, if you have an acute medical condition”.

December 14, 2021: Djokovic attends a professional basketball game in Belgrade and is photographed hugging several players from both teams, including some who later tested positive.

December 16, 2021: Djokovic later says he took a COVID-19 test in Serbia on this day, which was positive, but he also says he did not know the result until December 17. None of this was public knowledge until January, after his visa was first cancelled and the case went to court in Australia. That positive test is the grounds Djokovic used to justify his medical exemption for the Australian Open.

December 17, 2021: Djokovic attends an event in Belgrade honouring youth tennis players. Parents post photos on social media showing Djokovic and the young players without masks. Djokovic later says he was asymptomatic, took an antigen test before the event that showed he was negative, and only received the positive PCR result after the event.

December 18, 2021: Djokovic does an interview and photo shoot with the French newspaper L’Equipe, but does not say anything at the time about having tested positive. He says in January that he knew at the time he had COVID-19, saying: “On reflection, this was an error” of judgement.

December 22, 2021: According to court documents, Djokovic tests negative for COVID-19 in Serbia.

December 29, 2021: Djokovic withdraws from Serbia’s team for the ATP Cup, days before the competition is due to begin in Sydney. No reason is given.

January 1, 2022: Tiley is asked in a TV interview about Djokovic’s status for the Australian Open and responds: “There’s quite a bit to play out and I think it will play out in the coming days.”

January 4, 2022: Djokovic posts on Instagram a photo of himself at an airport with a caption that reads, in part: “I’m heading Down Under with an exemption permission.” Tennis Australia follows with a statement confirming Djokovic is on his way to the country with a medical exemption “granted following a rigorous review process involving two separate independent panels of medical experts”. Neither Djokovic nor Tennis Australia reveals the basis for his exemption. Tiley says a “handful” of exemptions had been granted out of 26 applications from players or others. A public outcry bubbles up on social media among Australians while Djokovic’s flight to Melbourne is in the air.

January 6, 2022: After being detained for about eight hours, Djokovic is denied entry to the country and his visa is cancelled. He is sent to an immigration hotel, where he remains for four nights. The Australian Border Force says Djokovic failed to meet entry requirements. Australian Prime Minister Scott Morrison tweets: “Rules are rules, especially when it comes to our borders.”

January 10, 2022: As part of his legal attempt to overturn the visa cancellation, Djokovic submits an affidavit that says he is not vaccinated for COVID-19. Federal Circuit Court Judge Anthony Kelly reinstates Djokovic’s visa, ruling the player was not given enough time to speak to his lawyers before the decision to deny him entry was made at the airport. Kelly orders the government to release Djokovic from immigration detention. Hours later, Djokovic practises at Melbourne Park.

January 11, 2022: With his status still uncertain, Djokovic is installed as the No 1 seed for the men’s field at the Australian Open. The tournament strictly follows the current rankings in determining seedings and Djokovic is ranked No 1; he has spent more weeks atop the ATP than any other man in the history of the men’s professional tour’s computerised rankings.

January 12, 2022: Djokovic’s most extensive public comments on the matter come via a post on social media that is put up by someone while he is practising at the Australian Open’s main stadium. He says there was a mistake on his travel declaration for Australia, which failed to indicate he had been in multiple countries over the preceding two weeks. Djokovic blames his agent for checking the wrong box on the form, calling it “a human error and certainly not deliberate”. He also discusses what he says was his positive COVID-19 test in December and the L’Equipe interview.

January 13, 2022: Djokovic is included in the Australian Open draw. He is slated to play another Serbian player, Miomir Kecmanovic, in the first round.

January 14, 2022: Immigration Minister Alex Hawke says he used his ministerial discretion to revoke Djokovic’s visa on “health and good order grounds, on the basis that it was in the public interest to do so”. Djokovic’s lawyers say they plan to appeal.

January 15, 2022: At a 15-minute procedural hearing held via video conference, Federal Court Judge David O’Callaghan says lawyers representing Djokovic and the government must submit written arguments on the appeal of Hawke’s decision later in the day.

Alex Jones turns on Donald Trump and backs Ron DeSantis, a sign that Trump may be losing his grip on the far-right

Expanding further outside India, the indigenously developed real-time payments solution UPI will foray into the…

Deluge wreaks havoc in Qinghai province amid a summer of extreme weather in China. At…

Alex Jones turns on Donald Trump and backs Ron DeSantis, a sign that Trump may be losing his grip on the far-right