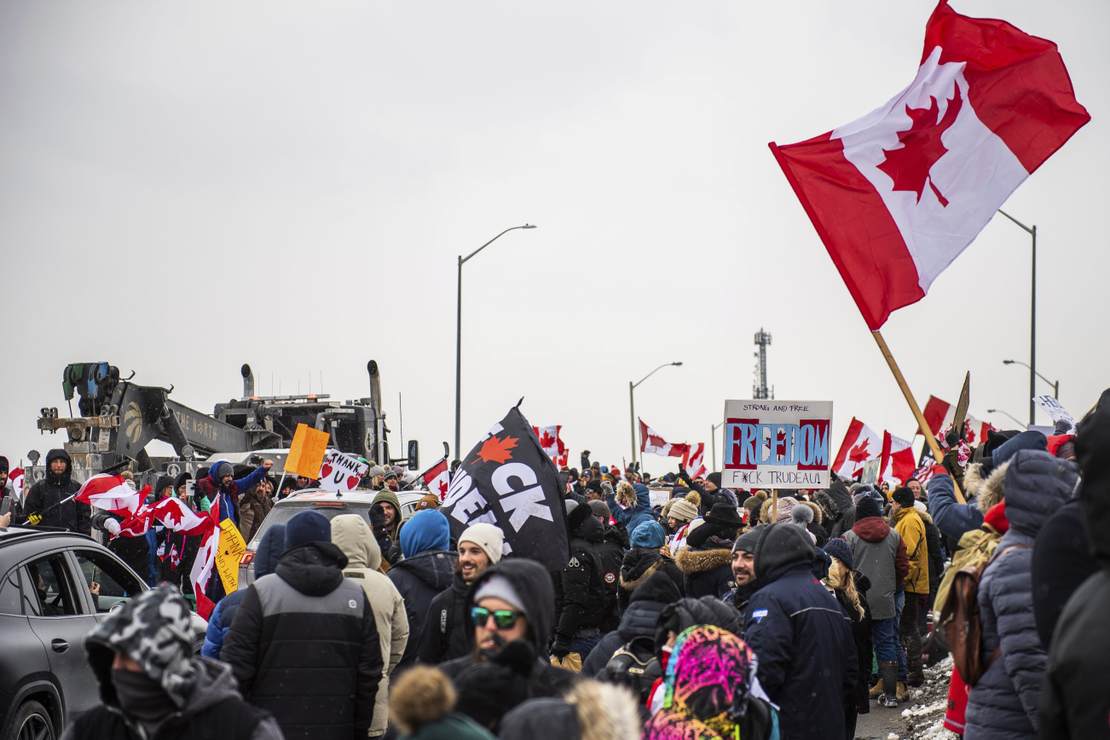 Freedom Convoy protesters are still holding fast in Ottawa, as well as other places throughout Canada, including in Alberta at Coutts, and the Ambassador Bridge in Windsor, Ontario.

Since the protests started, multiple Canadian provinces have announced they will be dropping their restrictions, mandates, and vaccine passports.

On Friday, Ontario Premier Doug Ford announced that the province would be dropping the vaccine passports and all restrictions on businesses “very soon,” but he didn’t give a date.

Premier Doug Ford teases the lifting of COVID restrictions and the removal of the vaccine passport. No end date has been given nor a concrete schedule.

There are reports that he might give a date on Monday. But until he gives a firm date, the truckers aren’t going to take anything he says seriously. He said they were now “working on a plan” to eliminate the vaccine passport system.

Someone is going to have to explain to me what “plan” they need beyond saying this is over. I mean maybe I think more simply than politicians, but it doesn’t seem that it takes anytime at all. Unless you’re actually stalling. Yes, “none of this has been easy,” as he says, while governments and politicians made it worse with their reactions.

But then Ford made some statements that indicated that police action will happen against the Freedom Convoy in Ottawa. He said it was no longer a protest but an “illegal occupation” and a “siege.” Ford declared a state of emergency in the province, saying “there will be consequences for these actions and they will be severe.”

Premier Doug Ford announces Ontario is entering a state of emergency. The premier outlined how protesters could face fines of $100,000 and a year in jail, saying that “there will be consequences for these actions.”

He said that they were strengthening the power of the police “to restore law and order,” and that they had moved against the Freedom Convoy to have a judge freeze their money raised by GiveSendGo. GiveSendGo told them to go pound sand.

Ford said that now he will be convening cabinet to “use legal authorities to urgently enact orders” that will protect international border crossings, as well as the 400-series highways, airports, bridges, ports, and railways, as well as ordinary roadways. Fines for non-compliance will be severe, with a maximum penalty of $100,000 and up to a year imprisonment, Ford said. He added that they would also be seeking additional ability to take away the personal and commercial licenses of those who do not comply. He said they would then try to move them in the legislature to make the orders “permanent in law.” They’ve also moved for an injunction to prevent protesters from blocking the Ambassador Bridge.

This was an effort to warn/threaten the protesters to leave, but it isn’t likely to make them leave. If they move in the police to remove them, it’s not going to end well, and Canadians are not going to be happy with people like Ford as a result. But notice what he’s saying: not only are they going to try to bring any laws or orders in place now to bear against the Convoy, but they’re also going to invent new “orders” just to punish these protesters because they want to stop them. The punishments are excessive, with the idea of preventing them from continuing, the purpose to stop the protest.

Check out what invoking the emergency already allows them to do.

I’m told this March 2020 explainer I wrote about the EMCPA is currently the most popular item on https://t.co/84VDjqXGJE: https://t.co/QOCw9cxyL1

It “gives the government broad powers in an emergency to shut down institutions or businesses, control movement and travel, and seize any necessary goods or property to deal with the crisis.” And you wonder why people are protesting?