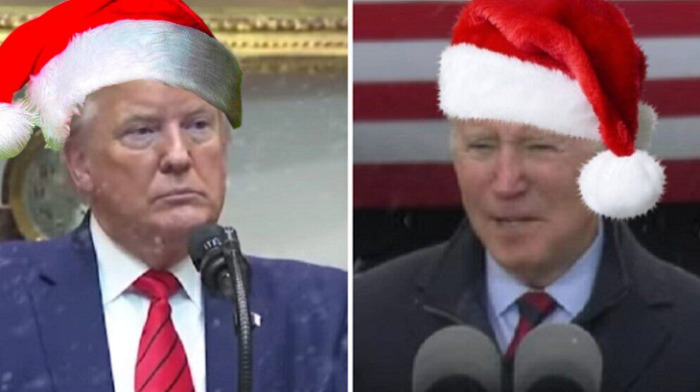 The song actually consists of various clips of Trump cut in succession to create the lyrics to a Christmas serenade to his successor.

The video was posted to a YouTube channel with nearly 2.8 million subscribers that appears to be dedicated to creating such rapid clipped songs of politicians.

“Merry Christmas, Sleepy Joe,” Trump pipes up in the chorus.

“Snow is falling all around me. Children playing, having fun,” he continues. “It’s the season, love and understanding, Merry Christmas, Sleepy Joe.”

The comment section on the video shows a positive response from viewers.

One says – tongue planted firmly in cheek – “This was so nice of Trump to take the time and send this to Joe.”

“I hope Trump sees this and uses it for his family Christmas party,” another writes.

Former President Trump has referred to Biden as ‘Sleepy Joe’ for eons now. The term most recently cropped up when the current President appeared to nod off during the 2021 United Nations Climate Change Conference in November.

“Biden went to Europe saying Global Warming is his highest priority, and then promptly fell asleep, for all the world to see, at the Conference itself,” Trump wrote in a statement.

“Nobody that has true enthusiasm and belief in a subject will ever fall asleep!” he mocked.

RELATED: Hillary’s Nightmare For Christmas: All She Wanted Was the White House, But THIS Happened

The ‘Merry Christmas, Sleepy Joe’ video is quite excellent.

How does it compare to a parody video that cropped up shortly after the 2016 election, though?

That video, created by JOE.co.uk, highlighted Hillary Clinton’s failure in the election and left Trump supporters in absolute stitches.

The video is a short parody of the John Lewis Christmas advertisement, in which a young girl is given a trampoline for Christmas only to be beaten to it by the family dog.

I’d say Hillary was probably not amused with the video, but it’s likely she didn’t see it in her alternate reality.

The alternate reality that prompts her to repeatedly claim she was cheated out of election victory and fantasize about having won by reading her victory speech … just a few weeks ago.

DELUSIONAL: Hillary Clinton recites in near tears the “WOULD HAVE BEEN” presidential victory speech she would have made if she had won the 2016 presidential election as part of her new “master class” pic.twitter.com/9sJRcr7Wsk

Pundits have been speculating about a rematch between Clinton and Trump in 2024, a prospect considered possible due to ‘Sleepy Joe’s’ incompetence in office.