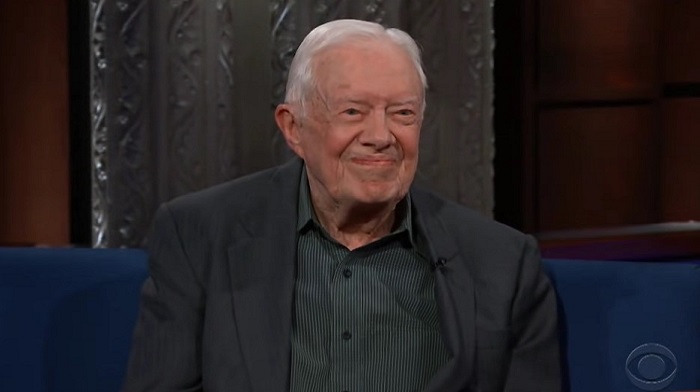 Claims of election fraud by Jimmy Carter began making the rounds over the weekend, showing the former President’s belief in the conspiracy theory that Donald Trump was an illegitimate President who actually lost the election in 2016.

The Russians, of course, being behind the trickery.

The quote was shared by actress and activist Mia Farrow and later commented on by conservative political commentator Michael Knowles.

Farrow shared an article by Politico from 2019 in which Carter, speaking before a panel in Leesburg, Virginia, began commenting on the 2016 election results.

“I think a full investigation would show that Trump didn’t actually win the election in 2016,” he said at the time. “He lost the election, and he was put into office because the Russians interfered on his behalf.”

Jimmy Carter: “a full investigation would show that Trump didn’t actually win the election in 2016. He lost the election, and he was put into office because the Russians interfered on his behalf,”https://t.co/iLeTP3wba8

Jimmy Carter: The 2016 Election Was Rigged

Knowles tweeted several messages which focus on the utter hypocrisy of the mainstream media in trashing Trump as a fascist, a destroyer of democracy, while showing little to no interest in Carter’s comments.

“Refusing to accept the results (of) an election? This man is a threat to our sacred democracy—lock him up!” he tweeted.

Jimmy Carter is a far more dangerous insurrectionist than the horn-hat guy,” Knowles added, referencing Jacob Chansley, known as the ‘QAnon Shaman,’ who was sentenced to 41 months in prison for his role in the January 6 riot.

Former President Jimmy Carter: If fully investigated, it would show that Trump didn’t actually win the election in 2016. He lost the election and he was put in office because the Russians interfered …on his behalf.
🎥 https://t.co/CYSBIK3qHF pic.twitter.com/o71Z4InVxB

In that same discussion panel discussion in 2019, Carter doubled down.

“So do you believe President Trump is an illegitimate president?” discussion moderator Jon Meachman asked.

“Based on what I just said, which I can’t retract,” Carter quipped, drawing laughter from the crowd. “I would say yes.”

Fox News contributor and columnist for The Hill Joe Concha tweeted his own tongue-in-cheek response.

“A chilling attack (without evidence) on Democracy by a former president, thereby placing said Democracy in peril,” he wrote.

Donald Trump, Hillary Clinton, and Jimmy Carter all refuse to accept the results of the same number of elections.

That currently makes three former Presidents and one current President who have cast doubt on the legitimacy of past elections, with only one being banned from social media and branded a traitor to the nation.

Hillary Clinton famously, when it was believed the 2016 election was in the bag, said any failure to accept the election results is “a direct threat to democracy.”

She would later insist President Trump lived “with this specter of illegitimacy” because “I was the candidate that they basically stole an election from.”

Hillary tells @karaswisher “So there is an air of illegitimacy that surrounds Trump’s presidency, and that just infuriates them….Because I was the candidate that they basically stole an election from.” https://t.co/NovSU9xxyo

President Biden cast his own doubts, agreeing with a woman at a campaign rally who said Trump was an “illegitimate president in my mind.”

New Hampshire voter to Joe Biden: “I have a very severe case of what’s called Trump Derangement Syndrome… He won it because he had help by the Russians… I don’t want to live in a country run by Vladimir Putin. He is an illegitimate president”

Now Biden is actively casting doubts on the legitimacy of the 2022 midterm elections.

This second attempt from Biden on whether the election will be legit is even worse.

“Oh, yeah, I think it could easily be illegitimate … The increase in the prospect of being illegitimate is in proportion to not being able to get these reforms passed.” pic.twitter.com/nCyuAWSMXm

When questioned by a reporter as to whether or not the President felt we would have free and fair elections in 2022, Biden planted the conspiracy seeds.

“Oh, yeah,” he replied. “I think it easily could be illegitimate.”

White House Press Secretary Jen Psaki tried to clarify those remarks saying, “He absolutely is not predicting that the 2022 elections will be illegitimate.”

Trump, of course, is the other President who has cast doubts on an election, with many Democrats insisting his rhetoric was inciting violence.

Jimmy Carter, after questioning the results of the 2016 election, was singing a very different tune just over a month ago when speaking about the 2020 election.

Carter, in an op-ed for the New York Times just before the anniversary of the January 6 riot at the Capitol wrote, “promoters of the lie that the election was stolen have taken over one political party and stoked distrust in our electoral systems.”

Apparently, he doesn’t recall his own words or the words of others in his party.