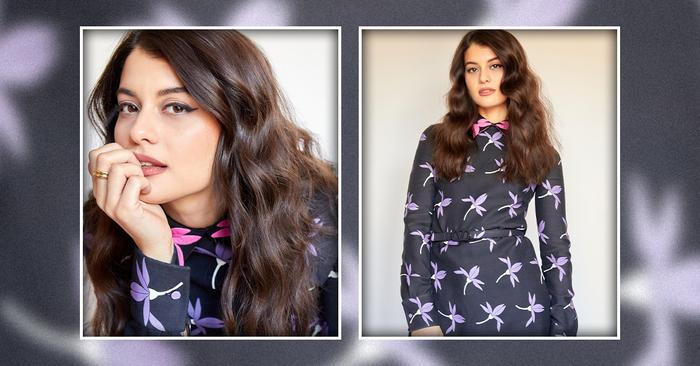 In addition to the actress’ dynamic performance, there’s plenty to note about her on-screen style in the series. Black-D’Elia perks up when we ask about her character’s oftentimes questionable wardrobe choices, namely a loud cobalt-blue coat that appears in episode one. Collaborating with costume designer Cailey Breneman was an “incredibly fun” process for the actress. The two talked at length about Sam’s look and the factors that would have informed what she wears. “When we first meet Sam, it seemed likely to us that she would have spent the majority of her earnings on alcohol,” she tells us. “And so we wanted the things that she wore to feel like she bought them at Zara like seven years ago.” Think distressed knits, printed blazers, and lots of plaid. To achieve Sam’s slightly outdated look, Breneman pulled from consignment shops such as Buffalo Exchange, Poshmark, and TheRealReal.

While Sam’s style is vastly different from Black-D’Elia’s, there was one outfit that really hit home for the actress. She imagines it would have been a look from Sam’s younger years that she found moving back home with her mom. “There’s something I wear in [episode three], which is a short-sleeve T-shirt and a weird tank dress that is a little ill-fitting and moccasins,” she says. “I felt like I looked exactly like this girl Rebecca that I went to Hebrew school with. She was—I don’t know—10 when I went to Hebrew school, so it’s a near 30-year-old woman wearing a 10-year-old’s Hebrew school outfit.”

Unlike Sam, Black-D’Elia has found entering her 30s to have a positive effect on her personal style. She admits to having spent most of her 20s caving to the pressures of what a 21st century actress should look and dress like, often trying to imitate others. But for the first time, she feels comfortable in her uniform and is actually wearing items she likes. “My husband has described my style as a 1950s boy on a paper route,” she says. “I love Americana vintage ’50s and ’60s. I like to thrift, especially when I’m in the Midwest or on a road trip. The majority of my closet is neutral and vintage because I’m not flashy.” Glancing down at the orange Parks Project sweatshirt she is wearing, she laughs at the irony of her previous statement but swears the hoodie is the brightest article of clothing she owns.

7 Major Shoe Trends That Will Be Everywhere This Fall
I Just Found My Next Under-$50 Summer Sandal Purchase on Sienna Miller’s Feet
Going Somewhere? Here’s What 2 Fashion People Are Packing for Their Next Getaway
4 Fresh Outfit Ideas That Are Perfect for Any Summer Occasion
“A Summer In Malibu” Zelie for She Drops a Dreamy Plus Size Collection
I’d Skip Every Current Shoe Trend For This One Cool Style
Share This Post
Comment

I Just Found My Next Under-$50 Summer Sandal Purchase on Sienna Miller’s Feet
Going Somewhere? Here’s What 2 Fashion People Are Packing for Their Next Getaway
4 Fresh Outfit Ideas That Are Perfect for Any Summer Occasion

Taking a closer look at the fall/winter 2022 collections that debuted earlier this year, there…

I love a celebrity who knows a good affordable find when they see one. I’ve…

“When packing for vacation I tend to gravitate toward easy, versatile pieces that can be…

“This versatile top is perfect for so many occasions, from brunch to coffee dates. Comfort…

Zelie for She, a Los- Angeles based contemporary plus size brand, has recently dropped their…