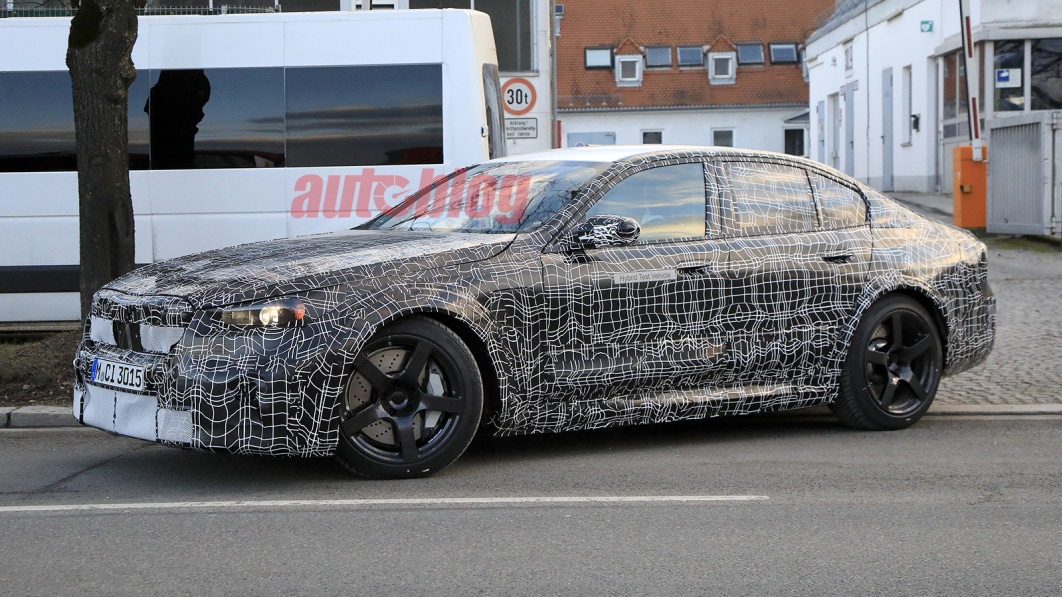 Last summer, we got a glimpse of the next-generation BMW 5 Series and its plug-in hybrid capabilities. Rumors suggested that even the M5 would become electrified. These photos seem to show the rumors are correct.

Identifying this as an M5 and not a regular 5 Series are a couple key items. First of all, this prototype is wearing fender flares to make room for fat tires. They look like they may be temporary add-ons for this prototype, rather than final bodywork. Besides accommodations for wider rubber, this prototype has enormous drilled brake rotors. The fronts also appear to have multi-piston brake calipers. And at the back, there are large cutouts in the bumper for the dual exhaust that weren’t on the regular 5 Series prototype we saw last year.

As for the hybrid part, that’s fairly obvious. The doors feature the “Hybrid Test Vehicle” stickers that adorn electrified BMW prototypes. And looking closely, we can see the charging door in the front left fender.

Past rumors have suggested the M5 hybrid could make around 750 horsepower. That seems quite likely, especially as the XM SUV BMW previewed last November also had a plug-in hybrid powertrain making 740 horsepower and 738 pound-feet of torque. All-wheel drive is also a likely shoe-in for the car, simply to manage all that power.

This and the last 5 Series prototype we’ve seen in spy photos look as though they’re fairly close to production. We would expect a reveal first of the regular 5 Series in a year or two, with the M5 following a few months to a year later.