Home News Teacher raises more than $100,000 for food to keep thousands of children from going hungry over winter break
The 34-year-old library teacher at Lakewood Elementary School in Durham, North Carolina, does everything she can to prove it, and her recent fundraiser, which collected $106,000 to feed her students in need, is her most recent gesture of love.
Winter break can mean weeks of food insecurity for children and their families, Durham Public Schools spokeswoman Crystal Roberts told CNN.
“It’s a basic human right. We’re not talking about raising money to buy people a vacation; this is food, a very, very basic thing,” Parker said. “We need to make sure we take care of our schools, because when we take care of our schools, we’re taking care of our community.”
Her endeavor, which she named Mrs. Parker’s Professors Foodraiser, used the money she raised to purchase, pack and distribute more than 5,200 bags full of food to students at 12 schools throughout the Durham Public Schools district.
In the dozen schools the project helps, 98% of the students rely on the low-cost or free lunches provided by their school. For many children, it is their main source for food. But once the holidays come around, the schools close and so do their cafeterias.
“Mrs. Parker has always had an army of donors and volunteers at the ready, to champion the needs of her students,” Lakewood Elementary School Principal James Hopkins told CNN in a statement. “What’s so impressive is that these efforts have provided students across Durham the same fortune; in this case, of receiving a substantial portion of food over the extended holiday break.”

“I need them to know that I love them”

Parker knew she wanted to be a teacher since she was 4 years old, sitting on her mother’s bedroom floor, setting up her teddy bears and pretending they were her students.
“I wanted to be a teacher all my life,” said Parker, who has been a teacher for 11 years. “This is what I love, it’s all I ever wanted to do, I am living my dream.”
Now the mother of one teaches more than 400 students, from kindergarten to fifth grade, and her love for them goes beyond the classroom.
“I call my students Mrs. Parker’s professors. If that tells you anything, it’s that I believe in them and I love them so very much,” Parker said. “‘I need them to know that I love them, to remind them that love is an action word. I will tell them all day, but I will also show them all day.”
Her promise to keep all her student’s fed began in 2015, when one of her student’s parents confided in her they would not have enough food for the children to eat through the holiday break.
“She told me, ‘I’ll be okay, I can go without eating, but I can’t let my kids go without eating for two weeks.’ It’s really hard to know they have stuff like this going on and not to do everything I can,” Parker said through tears. “My husband and I started thinking, if one family is asking this question, then there must be more.” 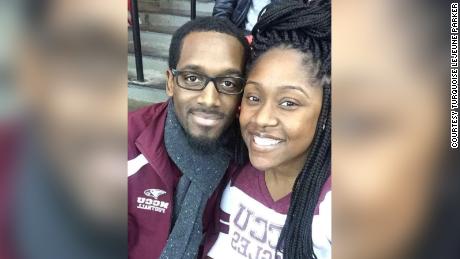 On December 14, 2015, Parker sent a text to everyone she knew, asking if anyone would be interested in donating money, so she could provide bags full of food to last them for the whole holiday break.
Progress was slow but steady. The first year, she raised $500. Last year, she reached $55,000. But this year proved to be a record, with more than $106,000 donated from people all over the country.
“It has left me speechless. I’ve cried about it a little every day,” Parker said. “It took off in a way we could have never expected.”

Within two weeks, Mrs. Parker’s Professors Foodraisers raised the money needed to purchase enough food to fill up big, brown grocery bags for thousands of children in the district.
Each bag contained kid-friendly food, such as cereal, canned goods, granola bars and macaroni and cheese that can be cooked regardless of a family’s living situation.
“This is a community effort. This is not $106,000 out of my pocket, this is the result of us operating as a collective,” Parker said. “It’s because of all the people who gave their time, their money, their talents to make sure our kids are taken care of.”
With the help of more than 60 volunteers who accompanied Parker to a local Costco, the group purchased the food and spent days packing the bags before delivering them to each school by December 11. 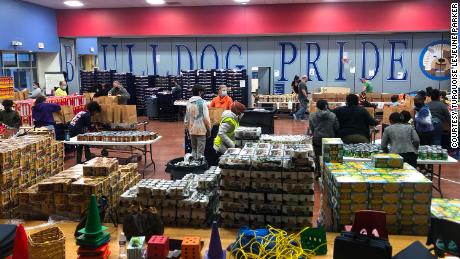 “Mrs. Parker is a school district’s dream teacher, a perfect mix of competence and compassion who is committed to serving young people holistically,” Durham Public Schools said in a statement.
“Her Foodraiser addresses food insecurity head-on, particularly during a time of year when commercialism brings need to the forefront,” the statement continued. “Through her efforts, our food-insecure students have access to sustenance when schools are closed for the holidays. She is their lifeline.”
The fundraiser’s success has inspired Parker to make it a lifelong project, she said, with an aim to feed as many children as possible during both winter and spring breaks.