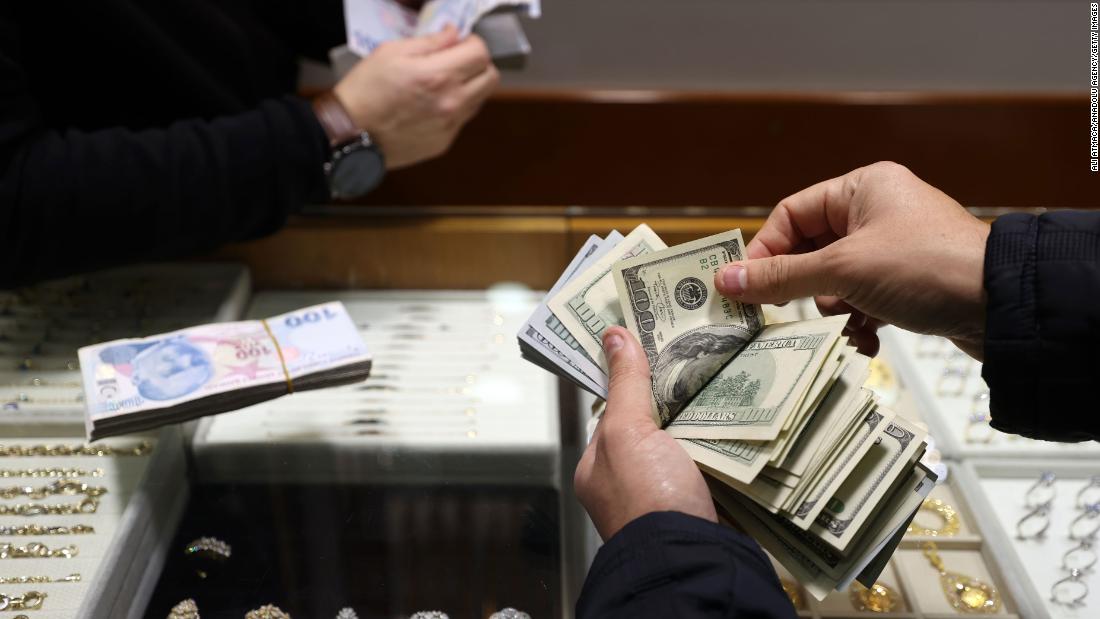 Erdogan said the government would try to protect Turkish savers worried about the tumbling value of their nest eggs by compensating them for the impact of the depreciation of the lira on their deposits.
The lira initially shot higher in response, and at one point on Monday had gained more than 20% against the dollar. But by Tuesday it was falling again, dropping more than 6%.
Analysts warned the new policy could end up costing the Turkish government a huge amount of money and Atilla Yesilada, a Turkish economist and country analyst for GlobalSource Partners, took a swipe at the decision.
“Please do not ask me to prove the earth IS NOT flat everyday,” he tweeted.

Why is the lira so unstable?

The Turkish president’s tendency to intervene in setting monetary policy, firing central bankers and finance ministers who don’t agree with his rate-cutting gamble, has undermined the lira. He frames Turkey’s economic woes as a result of foreign intervention and a struggle for more financial independence for the country.
Despite the gains on Monday, the lira has still lost about 40% of its value against the dollar so far this year.
On Sunday, Erdogan shrugged off criticism of his economic policy in a speech citing Islamic teachings on interest rates. His remarks only served to push the lira even lower.
“What do they say? They say I am lowering interest rates. They should expect nothing else from me. As a Muslim, whatever Islamic teachings require, that is what I will do. That is what I will continue to do. The religious command is clear,” he said.
Inflation in Turkey hit an annual rate of 21% in November, and economists think it could go even higher, with a rate of up to 30% possible over the next six to nine months.
Despite this, Turkey’s central bank cut interest rates for a fourth month in a row last week. Central banks typically raise interest rates when inflation is soaring to stop the economy from overheating.
The current central bank governor, Sahap Kavcioglu, took over in March 2021 after predecessor Naci Agbal was fired by Erdogan two days after hiking rates.

Jason Tuvey, senior emerging markets economist at Capital Economics, warned that linking bank deposits to the currency rate could transfer risks in the foreign exchange system to the pubic sector, with the country’s treasury “on the line for a large bill.”
Mass compensation paid out to Turkish savers would cause the budget deficit to widen.
“That might not be a problem now given that Turkey’s public finances are relatively strong — public debt is low at around 40% of GDP — but it would cause the public debt dynamics to worsen,” he said.
The new instrument will apply to personal deposit accounts with fixed terms of between 3 and 12 months, the Turkish finance ministry said in a statement.
Soaring inflation is already piling on the pain for consumers, and making it difficult for businesses to plan ahead.
Erdogan announced a nearly 50% hike in the country’s minimum wage on Thursday, hoping it would provide relief to suffering workers.
“With this increase, I believe we have shown our determination not to allow workers to be crushed under the weight of increasing prices,” the president said at a press conference.
The move may give Erdogan a political boost. But higher wages are a known contributor to inflation, and they could make an already dire situation worse.
The Turkish Business Association recently criticized government economic policy for its disruptive impact “not only for the business world, but also for all our citizens.”
“In the long term, the risk of causing much larger structural problems has increased. Even our exporters, who are expected to benefit the most, are suffering from this environment,” it said in a statement on Saturday.
It said that the country must return to “generally accepted principles of economics within the framework of free markets.”
But a pro-Erdogan business group said that it supported the president’s low interest rate policy. The Independent Industrialists and Businessmen’s Association said in a statement it believed it “will increase our export and employment-oriented gains many times over.”
— Gul Tuysuz in Istanbul, Charles Riley and Julia Horowitz in London contributed to this article.

Meghan Markle threatened to break up with Prince Harry if he didn’t release a statement confirming their relationship, according to a new book
Putin has escaped to his secret palace in a forest amid anti-draft protests in Russian cities, report says
Pro-Ukraine protest in Istanbul marks seventh month of war
Second Palestinian killed in Nablus by Israeli forces in 24 hours
Chromecast With Google TV (4K) to Receive Android 12 Update Soon: All Details
Amazon Great Indian Festival 2022 Sale: Best Deals on Smartwatches, Activity Trackers, Other Wearables
Share This Post
Comment

Second Palestinian killed in Nablus by Israeli forces in 24 hours

Second Palestinian killed in Nablus by Israeli forces in 24 hours

The second man, killed on Sunday morning, was identified as Saed al-Koni, reportedly a Palestinian…